Jarrett Hurd To Critics of Welborn Bout: I Need To Test Shoulder

Jarrett Hurd is well aware of potential criticism for taking on England’s unheralded Jason Welborn in his next fight on December 1, but the unified IBO/IBF/WBA champion’s taking full advantage of an optional defense to assure his recovering left shoulder is fully functional.

Hurd (22-0, 15 KOs) will pursue his third defense and eighth knockout in nine fights against Welborn (24-6, 7 KOs) on the undercard of Deontay Wilder’s heavyweight title defense against lineal champion Tyson Fury at The Staples Center in Los Angeles, marking the 6-foot-1, Accokeek, Maryland, native’s first bout since arthroscopic surgery in June to repair a torn rotator cuff.

The 28-year-old Hurd unified the titles in April with a split-decision win over southpaw Erislandy Lara (25-3-2, 14 KOs)in Las Vegas, scoring a final-round knockdown to add Lara’s WBA crown. Hurd said he went ahead with the Lara fight despite first noticing the shoulder problem in February, one which required six weeks of physical therapy and rehabilitation following the 30-minute operation he had at Howard University Hospital in Washington D.C.

“I know that people might be upset that I’m fighting Jason Welborn, but I want to make sure the shoulder’s good,” said Hurd of the shoulder corresponding to same arm used to throw the flooring blow against Lara, a hybrid hook-uppercut that dropped the Cuban southpaw with 37 seconds left in their fight.

“With me coming off of the shoulder surgery, I don’t want to rush things. Plus, I’ve fought the toughest competition in the division for so many years that I think I deserve at least one fight to get better from the injury. This is a chance for me to see where I am in the recovery process.” 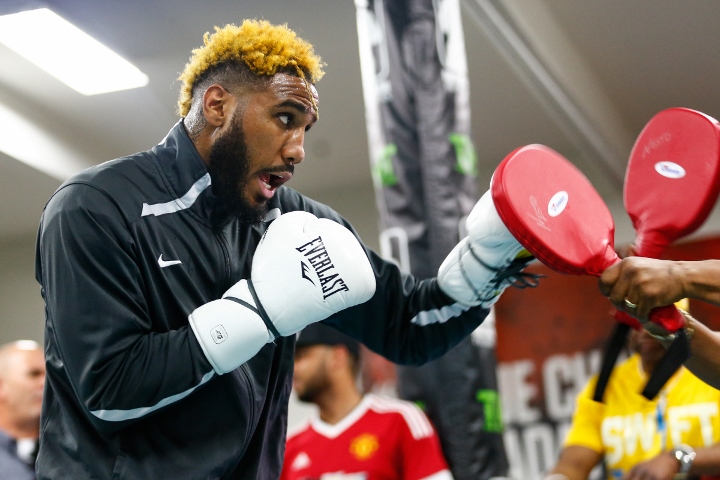 Hurd had stopped seven straight opponents before facing Lara, but trainer Nesto Rodriguez considers him to have been the underdog in bouts against Frank Galarza, Oscar Molina, Tony Harrison and Austin Trout.

“Name another champion who has been fighting tough fights like Jarrett has, back-to-back-to-back, with the last two of them being former champions in Lara and Trout. We’re glad to see him back in the ring after the surgeries been taken care of,” said Rodriguez of Hurd, who chose Trout and Lara over other options.

“As the champion in this situation, Jarrett is supposed to be the favorite, but I think we’re facing a strong, durable opponent. I believe that Jarrett’s going to go in there and box, and then, once he’s got his man broken down, he’s going to go for the stoppage, probably around the eighth or ninth round.”

Hurd’s knockout run began in April 2015 with a third-round TKO of Eric Mitchell. Then, in succession, Hurd scored stoppages of three previously unbeaten fighters comprised of TKOs in the seventh, sixth and 10th rounds over Jeff Lentz (August 2015), Galarza (November 2015) and Molina (June 2016).

Welborn, 32, has vacated the British middleweight title he was due to defend against Mark Heffron (21-0, 17KOs) on the Carl Frampton-Josh Warrington undercard December 22 undercard in Manchester, England.

Welborn is coming off a pair of split-decision victories over Tommy Langford in May and September. He has won five consecutive fights since losing back-to-back decisions to William Warburton and Craig Cunningham in May 2016 and July 2016.

“This has been a long time coming because I’ve been on the B-side for so many fights. So it’s good to be on the A-side. But for Jason Welborn, this is a chance at a big upset so I know that he’ll come to fight. Of course, I’ll take the knockout if it comes," said Hurd.

"But I do want to show the world that I can be versatile, moving and countering like I did in the Frank Galarza and Oscar Molina fights. I was more of a stalker against Harrison, Trout and Lara, but I want to use my range, length, jab and speed to show that I’m not just a brawler who has to walk you down.”

Lmao a lot of people getting mad about Hurd curtain jerking. It’s the opening match on the card...the arena will be empty still lmao Guy just came off shoulder surgery. He deserves a tune up. Plus, Hurd will fight anyone

[QUOTE=Chollo Vista;19248879]No one should be questioning this man whatsoever... Based off who he's fought and is willing to fight, should leave no doubt that he truly wants to be the best[/QUOTE] Yep, and to be fair I actually have seen…

[QUOTE=KTFOKING;19250392]I mean you say that while also making a thread about Jermell Charlo being protected LOL. I mean the only reason that fight isn't happening late 2018 or first month of 2019 is because Hurd prefers a tune up first.[/QUOTE]…

That's cool. He had a tough schedule and an injury.

[QUOTE=Chollo Vista;19249946]Pretty much... I think, It's a chance for Hurd to look good while winning in remarkable fashion all the while marketing his skill set to US and UK audiences for his future 2019 matchup They're essentially killing 3 birds…