Jarrett Hurd: At 160, Jacobs is Easiest For Me, Golovkin is Hardest

IBF, WBA, IBO junior middleweight world champion Jarrett Hurd (22-0, 15 KOs) is back to work after undergoing arthroscopic surgery to repair a torn rotator cuff in his left shoulder in June.

Hurd was in action back in April, when he dropped Erislandy Lara in the twelfth and final round to clinch a twelve round split decision to unify the three titles in his possession.

"I’m still young so this is just the beginning. I have a ton of fight left in me. There are some really great potential matches up at 160 once I move up. I definitely plan on continuing to fight the best because that’s the only way that someone like me truly feels as if I’m challenged, so my future looks bright," Hurd told Premier Boxing Champions. 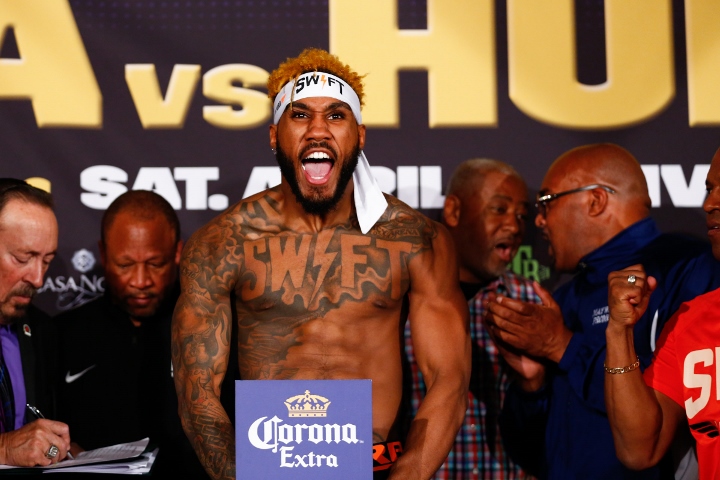 Before making a move to 160, Hurd wants to face WBC champion Jermell Charlo in a unification, but if he's not able to get a

"Right now, I’m trying to become the undisputed champion at 154 pounds by somewhere in the summer of 2019. If I’m not undisputed by then, I think it’ll be time to move up to 160," Hurd said.

As far as middleweight, Hurd views IBO, WBA, WBC champion Gennady Golovkin as the toughest challenge - while former champion Daniel Jacobs would be the easiest, based on his style.

"I’ve been focused mostly on 154, but I do see myself beating all of those guys. Canelo was once at 154, and I’ve watched some of his film and envisioned fighting him because he fought Trout and Lara like I did," Hurd said.

"I felt like he would have been my toughest competition at 154 outside of Lara. But now that I’ve beaten Lara, and Canelo’s at 160, I feel like I’m the best at 154.

"I believe that out of Jacobs, Charlo, Alvarez and Golovkin, the easiest one for my style would be Danny Jacobs. Second would be Jermall Charlo. The toughest out of all of them would be Golovkin."

Honestly, I really like Jacobs as a person and a fighter. But he is the only fighter today where I wil record his fights because every fight, he can potentially be knocked out and I don’t want to see that.…

[QUOTE=Jubei;19071556]This guy knows whats up, GGG at 36 the Kingpin of the division, at an age where most others were long retired, GGG still reigns supreme![/QUOTE] :lol1: The dude that lost to Jacobs & Nelo that will lose to Nelo…

[QUOTE=factsarenice;19071485]Like to see either [B]Charlo fight one live dog[/B]...just one. Sorry but the video shows Charlo in with a nobody[/QUOTE] So as a fan tell your boy lil g to man up & fight Jermall. I know Nelo will beat…

[QUOTE=TreJac;19070569]For some strange reason, I don't believe the Hurd/Charlo fight will be made at 154 before the end of the summer of 2019! The powers at be will not risk either guy loosing before Hurd moves up to 160! I…