Jarret Hurd Can See Errol Spence Showdown in His Future

IBF, IBO and WBA junior middleweight champion Jarrett Hurd can see the materialization of a 154-pound clash with IBF welterweight champion Errol Spence sometime down the road depending on how soon the undefeated southpaw follows through on his ultimate plans to rise in weight.

“Swift” Hurd unified the titles with a split-decision win over southpaw Erislandy Lara (25-3-2, 14 KOs) on April 7 in Las Vegas, scoring a knockdown in the final round after having stopped his previous seven straight opponents. 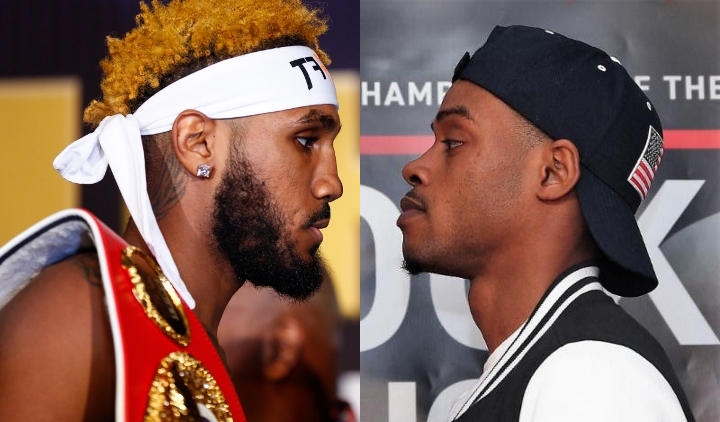 In his last fight in June, Spence  (24-0, 21 KOs) scored his 11th straight knockout with a first-round body shot that dropped and stopped Carlos Ocampo (23-1, 14 KOs) at The Ford Center at The Star in Frisco, Texas, the Dallas Cowboys’ training center near his hometown of DeSoto. Ocampo represented Spence’s second defense of the crown he won in May 2017 by two-knockdown, 11th-round KO of Kell Brook in England.

The 28-year-old Spence has been linked to a potential clash with four-division champion Mikey Garcia (39-0, 30 KOs), who is firmly committed to rising in weight to face him, and desires unification bouts with counterparts Keith Thurman (WBA), Shawn Porter (WBC) and Terence Crawford (WBO).

“I’ve seen interviews where Errol Spence has said that ‘when I move up, I want to go straight for the gold,’ meaning he wants to go straight for the titles, and a fight with Errol Spence is definitely something I’ve often thought about,” said Hurd, 28, told BoxingScene.com during a Friday evening workout at The Hillcrest Heights Boxing Club in Temple Hills, Maryland.

“So when you think about the champions you’ve got Jaime Munguia [WBO,] who is on the Top Rank-HBO side, so that would be tough for Spence to go after someone like him. Then you’ve got Jermell Charlo [WBC,] who is in Spence’s camp [sharing trainer Derrick James,] so he’s unlikely to face him first. So the only person Spence could be speaking about is me at 154, and I like that fight for sure.”

Having shared corner man James with Spence and Charlo (31-0,15 KOs) in the past, newly-crowned WBA “regular” middleweight champion Rob Brant (24-1, 16 KOs) called “The Truth’s” punching power “barely human,” and, “on a different level” in comparison to 160-pound rival Ryota Murata (14-2, 11 KOs), whom Brant dethroned by near-shutout unanimous decision on October 20.

“I’m definitely going to move up, and I feel that Jermell’s gonna move up pretty soon after he does what he has to do at 154, like after he fights Jarrett Hurd and gets all of the belts. But I’ve still got a lot to left to handle at 147 right now,” said Spence last month.

Hurd won his crown with a ninth-round TKO over Harrison in February 2017 and defended it in October 2017 with a 10th-round TKO over left-handed former titleholder Austin Trout. Trout was stopped for the first time in his career versus Hurd.

“Right now, I think it would make sense for me against Errol Spence to happen at 154, and that’s a fight that I would like to take. With me being from the Washington, D.C., area, it’s like the Redskins against the Dallas Cowboys,” said Hurd.

“When I defeat Charlo, which I know that I definitely will, then I’ll see if I can get a chance to get the WBO title from Jaime Munguia. I want to unify, but if that takes too long, then there are bigger and better things at 160.”

[QUOTE=JWHardin;19253181]I see, it's only ring rankings that matter, if it fits your agenda. GBP probably has nothing to do with that either? Lmao. You are wasting my time with your bs. I have half a notion to tell your mom…

[QUOTE=Chollo Vista;19251274]And tell me what Trout, Harrison and Lubin did to deserve to be in The Ring Top 10? Do you even know the difference between the ring ratings vs your typical ABC ratings? Harrison and Trout did ABSOLUTELY nothing…

[QUOTE=JWHardin;19251245]My bad on Galarza. It was John Thompson that he beat, that was KO'd by Galarza. I noticed you didn't mention why you thought Smith and Ali deserved to be ranked? Lubin, Jackson, Hatley, Trout, Vanes M. all should have…

[QUOTE=Chollo Vista;19251188]It's been over a day and you still have YET TO ANSWER the question WHO on Jermell's record should have been Top 10? You can't answer because none of them. And LOL @ you saying Liam smith got KOd…

[QUOTE=JWHardin;19251162]Smith and Ali were the absolute weakest 154 champs we have had in the last 15-20 years. Ali beat a shot Cotto, and lost to Jesse Vargas. He wasn't even a 154lber until Cotto tried to cherry pick him. Smith…