Jarrell "Big Baby" Miller is crying foul for his latest regression as a professional prizefighter revolving around performance-enhancing drugs.

Miller tested positive for GW1516 through a urine test administered by VADA, and the undefeated heavyweight contender blew the chance at a second fight in 13 months. Miller was scheduled to fight Jerry Forrest on July 9 in Las Vegas on ESPN, and much like his fight against Anthony Joshua last year, he was removed as the headlining opponent because of his PED infraction.

Miller made his first public comments on Tuesday about his most recent shortcoming.

"I have never, ever willingly taken a steroid for performance-enhancing purposes," Miller told Jeremy C. Herriges of the Fight Network. "Did I take something for healing properties, for injuries? Yes, I have. But to win a fight and during a training camp? No, I have never done that.

"Nobody can be more outraged [of the allegations] than me. I'm the one that's lost millions of dollars. I'm the one that's had his career on the line. ... But I have to think about it with a straight mind. I have to figure it out. Sit down with my team. Get everything in order and get everything done in the right way … It's sad. I'm angry about it, but like I said, there is an explanation for it, and me and my legal team are working on it." 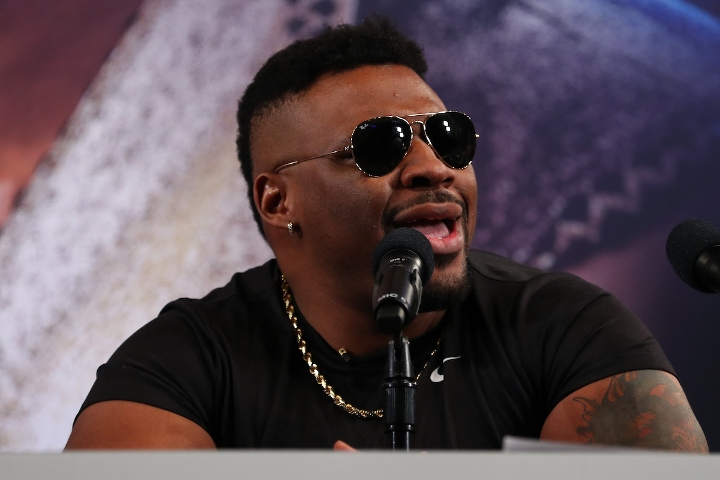 The 31-year-old Miller (23-0-1, 20 KOs) tested positive for three PEDs, including GW1516, HGH and IPO, last year ahead of his June 1 scheduled fight against Anthony Joshua. The title shot was eventually given to Andy Ruiz, who shocked Joshua for the heavyweight title before losing it back to Joshua months later.

Nevertheless, he still believes that he should not be expelled from boxing for life.

"I should not be banned [for life]," said Miller. "I'm prepared to accept my suspension and be willing to do my monthly testing [during] my suspension, but to be banned for life? You're out of your mind … I've done my research and homework to do my best to not make this happen, and all I can do is apologize to Bob Arum, apologize to Jay [Prince] But at the same time, I did do my homework. I did put my best foot forward. I did let VADA know of certain circumstances. I did my part as a human being and as a fighter.”

Miller made remarks several times throughout the interview that the facts surrounding his recent infraction will be released in the future, and that his team is going through a legal process.

Miller has not fought since scoring a KO win over Bogdan Dinu in November 2017.

He served a six-month suspension by the WBA immediately after the Joshua fight was scrapped.

The Brooklyn-based boxer was also suspended during his days as a kickboxer in 2014 when methylhexaneamine was found in his body.

[QUOTE=Tyistall;20637476]Fury won against Klitschko, while on the juice. "Nobody is a saint" doesn't cut it. He's a steroid cheat who's name should be right there beside Miller's and the rest[/QUOTE] its no comparison. miller has been busted for steroids/PEDs on…

Is there such thing as PED rape??

[QUOTE=Ritz Kola;20637828]He's a straight up female dog- and I heard his b**ch *ss voice while reading the article. He shouldn't just be banned for life, he should be slapped like a 5$ street walker late on her payment. Everyday. For…

[QUOTE=Tyistall;20643607]Oh right away boss. You dickhead. You think I care what you think or say? You can go **** yourself for all I care. If you watch the fights, then fine, watch the fights. But when you come on here…