On June 27, 2020, it was revealed that, once again, Jarrell Miller had tested positive for a banned performance enhancing drug. The test was administered by the Voluntary Anti-Doping Association (VADA) at the request of the Nevada State Athletic Commission soon after Miller signed to fight Jerry Forrest on a Top Rank card scheduled to be televised by ESPN on July 9.

The drug in question is GW1516 (a banned substance also known as Cardarine and Endurobol). It was developed in the 1990s to treat diabetes, obesity, and cardiovascular disease. Its use was largely discontinued in 2007 after it was linked to the development of cancer during trials on mice. It's not classified as an anabolic steroid but is considered an anabolic compound and has anabolic properties because it helps build muscle mass. Essentially, it forces skeletal muscle to use fat rather than carbohydrates as an energy source and is also an endurance aid.

Samples taken from Miller on two later dates tested negative. A negative test result doesn't mean that a fighter hasn't used performance enhancing drugs. It means that the fighter was clean on the day that a particular blood or urine sample was taken from him.

On June 29, as a consequence of the adverse test finding, Miller was temporarily suspended at the direction of Nevada State Athletic Commission executive director Bob Bennett. The full commission is expected to remove the "temporary" and suspend Miller at its next meeting. Absent a negotiated settlement between Miller and the commission, there will then be a hearing and the full commission will issue a final ruling on the matter.

This isn't Miller's first public encounter with a banned performance enhancing drug. Nor is it his second. In 2014, he was suspended by the California State Athletic Commission after testing positive for methylhexaneamine following a Glory 17 kickboxing event. Several years ago, he was dropped from the World Boxing Council rankings because he refused to join the WBC Clean Boxing Program. Last year, he tested positive for GW1516, human growth hormone, and EPO prior to a scheduled June 1 heavyweight championship fight against Anthony Joshua at Madison Square Garden and was removed from the card. 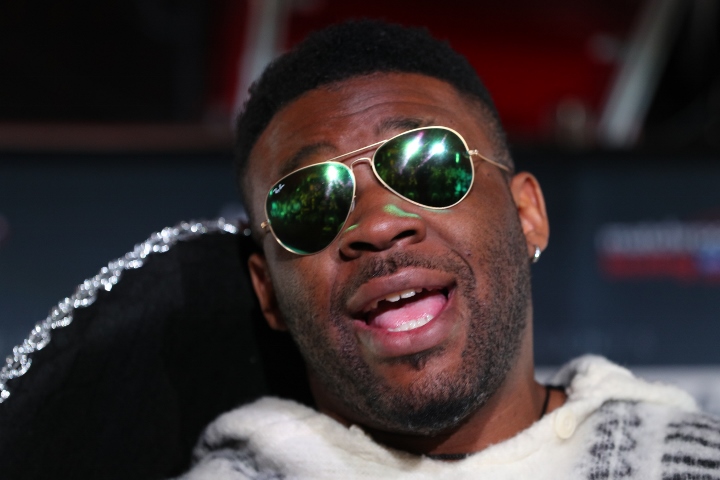 When Miller tested positive prior to his scheduled fight against Joshua, the New York State Athletic Commission had an opportunity to send a message regarding the use of banned performance enhancing drugs in New York. And it did.

The message the NYSAC sent was: "We don't care."

I've written at length about the New York State Athletic Commission's dereliction of duty when it comes to medical issues, most notably with regard to the use of banned PEDs in boxing.

Inexplicably, human growth hormone and EPO (two of the three performance enhancing drugs that Miller tested positive for in 2019) aren't even banned by the New York commission. GW1506 is.

Despite having a budget that dwarfs that of every state athletic commission in the country except California, the NYSAC conducts only cursory PED testing. The only reason that VADA tested Joshua and Miller for PEDs last year was that the championship bout contracts between the fighters required it.

Last year, after Miller tested positive for GW1516, human growth hormone, and EPO, the New York State Athletic Commission declined to license Jarrell but took no further action against him. In taking this position, NYSAC executive director Kim Sumbler claimed (and the NYSAC has since maintained) that the commission couldn't take further action against Miller because he wasn't licensed to fight in New York.

That's a gross misstatement of the law. As Pat English (who is on the legal committee of the Association of Boxing Commissions and perhaps the best "boxing lawyer" in the country) explained in a May 6, 2019, letter to Sumbler, "Miller's Federal ID is issued by New York. The ID application form reads in part: "Boxer agrees to abide by these terms and conditions [the Rules and Regulations of the New York State Athletic Commission] and any other rules set forth by the ABC and the Boxing Commission that issued the identification card.' By using PED's," English continued, "Miller obviously violated rules of the New York State Athletic Commission in violation of his signed application for an ID. The application form which Miller would have signed also states: 'Any false or misleading statements on this application may result in the Boxer being placed on the National Suspension list,' Frankly, if that does not give New York jurisdiction to suspend his Federal ID, I do not know what does. The language on the form signed by Miller is clear and unambiguous."

Miller underwent no PED testing for an entire year after his 2019 testing debacle because the NYSAC walked away from its responsibilities. As soon as the Nevada State Athletic Commission was formally advised that Miller was scheduled to fight in Las Vegas on July 9, Bob Bennett asked VADA to test him. Jarrell had to have known that Nevada would test him. He probably didn't know that the test would be administered so quickly.

After the positive test result was announced, Miller told Fight Network, "I have never, ever willingly taken a steroid for performance enhancing purposes. Did I take something for healing properties, for injuries? Yes, I have. But to win a fight and during a training camp? No, I have never done that. Nobody can be more outraged than me. I'm the one that's lost millions of dollars. I'm the one that's had his career on the line. But I have to think about it with a straight mind. I have to figure it out. Sit down with my team. Get everything in order and get everything done in the right way. It's sad. I'm angry about it. But like I said, there is an explanation for it, and me and my legal team are working on it."

So far, that's not much of an explanation.

What punishment should be meted out to Miller if the adverse finding is upheld?

But let's keep things in focus. Miller is a symptom. He's not the cause of boxing's PED problem.

If you want a poster person for bad behavior with regard to performance enhancing drugs in boxing, consider Travis Tygart (CEO of the United States Anti-Doping Agency). USADA conducted more than 1,500 tests for PEDs on professional boxers and reported only one positive test result to a governing state athletic commission. If Miller had been tested by USADA rather than VADA, his positive test result might have been "adjudicated internally" and never communicated to the Nevada commission.

What about the many physical conditioners who funnel PEDs to fighters? The managers and other team members who cover up for them? And the state athletic commissions in addition to New York that turn a blind eye toward the problem?

It's not just New York. What makes the situation in New York so egregious is the enormous amount of taxpayer money that's poured into the New York State Athletic Commission. There's no professional boxing in New York at present, and there's unlikely to be any in the near future. That, coupled with the current fiscal crisis occasioned by COVID-19, means the longstanding practice of taxpayers footing the bill for no show jobs at the NYSAC and some employees being paid fulltime wages for what have long been part-time jobs is even more intolerable than it was before.

Moreover, in contrast with New York governor Andrew Cuomo's commendable performance in dealing with the coronavirus pandemic, the NYSAC's way of dealing with boxing's PED problem has been to misrepresent relevant facts, tell people that it's doing a great job, and otherwise ignore the issue as best it can.

On April 29, 2019, Pat English wrote a letter to the executive committee of the Association of Boxing Commissions with regard to the New York State Athletic Commission's handling of the Jarrell Miller matter. In that letter, English stated that the NYSAC was "completely ignoring" its responsibilities under the Professional Boxing Health and Safety Act. Three days later, English sent a similar letter to NYSAC executive director Kim Sumbler in which he declared, "I see more than twenty years worth of work in the formulation of the Professional Boxing Health and Safety Act, the Muhammad Ali Act, mandatory adherence to the suspension list, and years of ABC work pushed backward by actions (or inactions) by some in situations such as the Miller situation. That is, to me, morally repugnant."

English then took matters a step further and, as a member of the ABC legal committee, served as the driving force behind a change in ABC policy. Fighters who apply for a federal identification card from now on will be required to fill out an ABC application form that states, "The use of performance enhancing drugs may result in the Boxer being placed on the National Suspension list. Boxer agrees that the following entities have the authority to place Boxer on the National Suspension list with cause and subject to due process: (a) The Commission issuing this ID. (b) Any Commission under whose jurisdiction an alleged rules violation has occurred if the Boxer is scheduled to fight in that jurisdiction, or (c) The ABC."

This gives the Association of Boxing Commissions the authority to suspend a fighter who tests positive for a banned performance enhancing drug and will allow the ABC to fill the void when a commission (such as the NYSAC) fails to fulfill its responsibilities. Fighters will be bound to this new ABC policy as their old federal ID expires and they apply for a new one.

A five-person ABC committee has been set up to consider suspensions if and when the issue arises. The due process protocols that the committee will follow were drafted by English.

Jarrell Miller is a large target, figuratively and literally speaking. Given his past PED test history - and absent a satisfactory explanation for his most recent positive test result - a lengthy suspension would seem to be warranted. But the current situation is an indictment of the system, not just Miller. It's more important to reform delinquent state athletic commissions and punish illegal PED distributors than it is to reform Jarrell. Why should Jarrell Miller be banned from boxing while all of the facilitators and enablers go free?

LOL basic ped testing in new york with some of the biggies not even banned, wtfffffffff

Until real punishment, fines and even imprisonment is used to stop the ped user's they're only being enabled by the system itself that does nothing. 6 month's... half of today's belt holding melts take that long between fight's anyway. 1st…

[QUOTE=Ray*;20654292]This is why I hate Hauser, the man is a pure horse***** hypocrite. He would never call out someone like Arum and we all know why. He targets a certain type of people in boxing. Arum has cancel his contract…

[QUOTE=ShoulderRoll;20654259]Thomas Hauser somehow saw fit to criticize everybody involved with this except for Bob Arum. He even found time to take a shot at Travis Tygart and USADA who had nothing at all to do with Big Baby Miller. :lol1:…

[QUOTE=57Blues;20653696]No one seems to agree with me on this one thing but it is part of how I feel about this PED situation. What about Bob Arum? He was the promoter he got this guy a shot at the fight.…