Jarrell Miller-Artur Szpilka in Play For October 6 in Chicago

The unbeaten Brooklyn native got into an altercation with IBF/IBO/WBA/WBO champion Anthony Joshua when they were on stage during DAZN’s press conference in Manhattan. Miller will have to wait, however, before he gets his shot at Joshua.

The British superstar’s WBA mandatory defense against Alexander Povetkin was announced Tuesday as the first main event for DAZN’s inaugural boxing show in its partnership with Matchroom Boxing, Joshua’s promoter. Joshua (21-0, 20 KOs) and Russia’s Povetkin (34-1, 24 KOs) are scheduled to fight September 22 at Wembley Stadium in London. 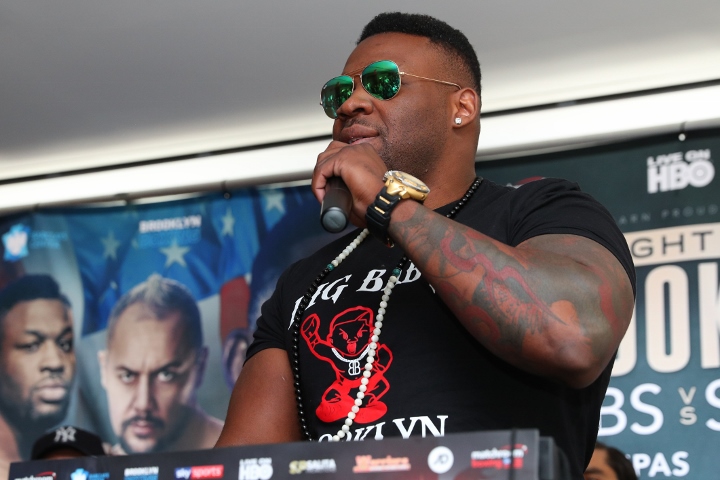 Miller, meanwhile, told BoxingScene.com that a deal is nearly complete for him to box Polish southpaw Artur Szpilka on October 6 in Chicago.

The Miller-Szpilka fight will be part of a DAZN broadcast that also will feature a light heavyweight bout between IBF champion Artur Beterbiev and Callum Johnson, as well as former two-division champion Jessie Vargas against an undetermined opponent. The bout between Russia’s Beterbiev (12-0, 12 KOs) and England’s Johnson (17-0, 12 KOs) also was announced Tuesday.

“I’m definitely gonna knock his ass out,” Miller told BoxingScene.com regarding Szpilka. “I need a good knockout right now. I need to continue to be dominant and keep moving forward. That’s it.”

Adam Kownacki (17-0, 14 KOs), Miller’s close friend and frequent sparring partner, stopped Szpilka (21-3, 15 KOs) in the fourth round of their fight a year ago in Uniondale, New York. The 30-year-old Miller (21-0-1, 18 KOs) feels Szpilka took Kownacki lightly, though, and paid dearly for underestimating him.

“Every fight is dangerous,” said Miller, who defeated France’s Johann Duhaupas (37-5, 24 KOs) by unanimous decision in his last fight, April 28 at Barclays Center in Brooklyn. “I know for a fact that he wasn’t training and he was sleeping on Adam Kownacki because he thought he was a chubby guy. A lot of people sleep on Adam because he’s not the fittest-looking dude. But the f*cker’s fit.

“He gives me a run for my money every training camp. Since we were 15 years old, we’ve been banging [in sparring]. I lost more brain cells sparring Adam than in all my fights combined, with all the rounds I’ve done with him. People sleep on Adam, but I say, ‘You better watch out! Adam will bust your ass!’ ”

The 29-year-old Szpilka most recently defeated Dominick Guinn (35-12-1, 24 KOs) by unanimous decision May 25 in Warsaw. That 10-rounder was Szpilka’s only fight since Kownacki knocked him out in July 2017 at Nassau Veterans Memorial Coliseum.

So this is the fight he ducked Pulev for? Horrible!! When Whyte decided to go in another direction he had a better fight lined up. This though, is just pathetic. You're a clown Miller.

Can't wait for somebody to derail this big dummy. He talks too much and he's nearly reached the point of begging for a Joshua fight. He's a typical NY fighter....when somebody can stand up to them and outwork them, they…

[QUOTE=Lemonhead_Jeff;18947122]Spilka is a punching bag and a backwards step for Miller. Hearn will probably waste Miller's time, like he did while promoting King Kong Ortiz. Like he's been doing with another Brooklynite, Danny Jacobs.[/QUOTE] Agree with you on most part…

Spzilka is semi-acceptable imo, if nothing else he's a southpaw who can box a bit, which poses something of a question to Miller that he's not been asked before. That said, I'm sure Miller answers that question with the same…

they gonna feed this guy everybody Wilder fought aren't they?