Jared Anderson Takes Out Luis Pena in One Round

Jared Anderson continues to thrive in The Bubble.

The unbeaten heavyweight prospect from Toledo, Ohio overwhelmed Luis Pena en route to a 1st round stoppage in their ESPN+ televised clash Saturday evening at The Bubble at MGM Grand in Las Vegas.

No knockdowns were scored but an accumulation of punches led to the stoppage at 2:46 of round one. 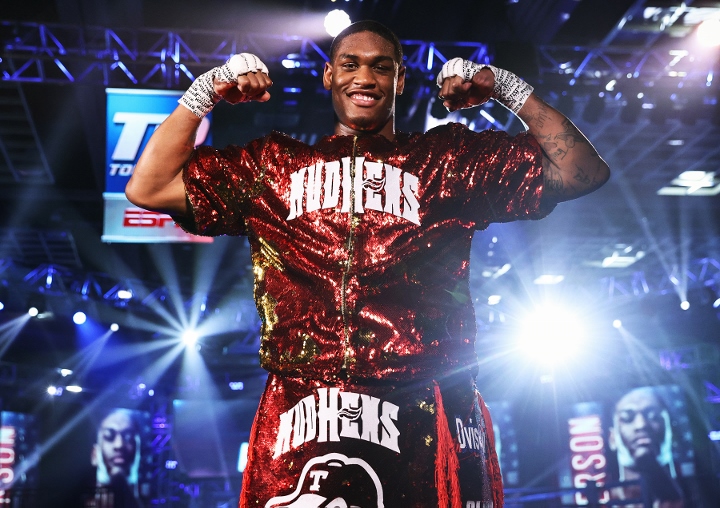 Anderson immediately went to work, throwing every punch with knockout intentions. Pena was forced to cover up as Anderson targeted the body before bringing his left hooks upstairs, at time punching through his opponent’s guard.

A long right hand by Anderson left Peña trapped in a corner, with the Toledo native teeing off on his wounded foe. Three straight rights landed for the unbeaten heavyweight, followed by a left hook and a right uppercut which snapped back the head of Peña.

Anderson continued the attack, scoring with a head shot which forced Peña to stagger about the ring. A follow-up attack left Peña pinned along the ropes, forcing referee Mike Ortega to wave off the mismatch.

Peña has now suffered two straight knockout losses in falling to 6-2 (6KOs). The fleshy heavyweight from Ventura, California was stopped inside of five rounds by Michael Polite Coffie this past August in Los Angeles.

As for Anderson, it’s four straight knockout wins during the pandemic, a run which began with the first show on location since Top Rank helped bring televised boxing back to the U.S. in June. Saturday’s win runs Anderson’s record to 7-0 (7KOs), picking up his fifth 1st round knockout in the process.

The bout served on the preliminary portion of a six-fight stream topped by Naoya Inoue (19-0, 16KOs) in a unified bantamweight title defense versus Jason Moloney (21-1, 18KOs).