Heavyweight prospect Jared Anderson wants to get one thing straight: He has no plans to change his nickname of “The Real Big Baby” even though it invokes the “Big Baby” moniker carried by disgraced heavyweight Jarrell Miller, whose career is in limbo after yet another positive drug test.

“Not at all; not even close,” Anderson told BoxingScene.com about the prospect of a name change. “I always felt I was the ‘Big Baby.’ No disrespect to (Miller) or anything but I just think that (nickname is) me, that’s my name. I came up with it. Nobody is going to put the name to use like I am. I’m always gonna be the better man.”

On July 4th, Anderson also tweeted about the nickname that he’s been questioned about, writing, “I’ve Been Holding My Tongue Trying Not To Speak On The Situation But Y’all Can Kill The Noise Bout Changing My Name It’s Big Baby Plain And Simple I’m Not Him And Not Associated With Him This Name Tattooed On My Body Twice I’m Not Changing For NOBODY.”

The nickname is the only thing Anderson’s promoter, Top Rank chairman Bob Arum, does not care for when it comes to the 20-year-old prospect.

“I don’t like the name ‘Big Baby’ because it doesn’t fit him,” Arum said. “It fits Miller better because he’s a big guy, not in the best shape. But Jared is built tremendously, so I don’t think ‘Big Baby’ fits for Jared but that’s a choice that’s up to him.” 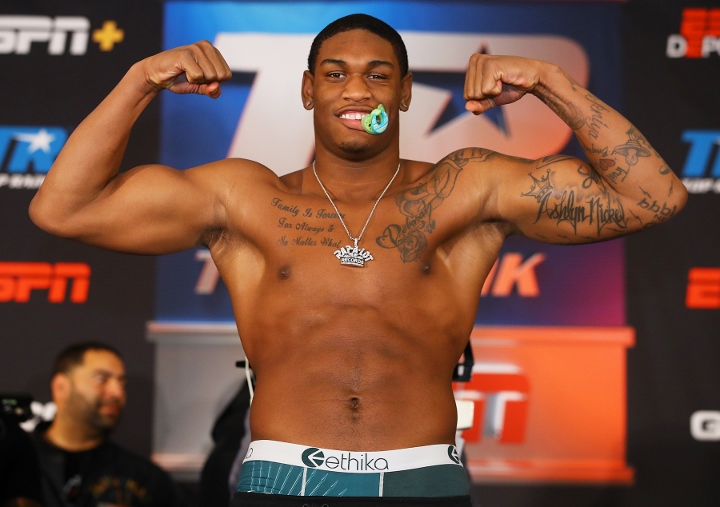 Fighter and promoter certainly do agree on Anderson’s potential to be a key player in the future of the heavyweight division. Anderson was supposed to fight for the second time in one month against 29-year-old Puerto Rico native Hector Perez (7-2, 3 KOs) in a scheduled four-round bout on Thursday night’s Top Rank Boxing on ESPN card headlined by a 10-round heavyweight fight between Jerry Forrest and former world title challenger Carlos Takam, who took the fight on short notice after Miller was bounced from the show following his most recent positive drug test for the banned substance GW1516.

However, Anderson-Perez was canceled at the weigh-in on Wednesday because Perez had a non-coronavirus medical issue. Top Rank told BoxingScene it plans to reschedule Anderson on its July 21 card against Perez if his medical issue is cleared. If it isn’t Anderson would face a new opponent.

Anderson (4-0, 4 KOs), of Toledo, Ohio, turned pro in October and is pleased about being active, especially at a time when so many boxers are on the shelf due to the lack of shows during the coronavirus pandemic.

“I love it. I’m grateful for the opportunity to be put on this platform and continue to stay busy at this time of crisis,” said Anderson, who has six brothers and two sisters. “I’m grateful and excited.”

He said fighting without spectators is no big deal even though he is looking forward to the normalcy of when fans are allowed to attend fights again.

“Pretty anxious,” he said. “But I didn’t have the crowds there with me in my first few fights. I was the first or second fight and one I was the last fight where nobody was really there. I’m not used to real big crowds, but I am excited to get a big crowd after this pandemic is over.”

He would especially like to fight at home in Toledo.

“I can’t wait. I’m super stoked and hopefully that can happen,” said Anderson, who is a natural left-hander but fights out of a right-handed stance. “That would be amazing. I have a great following back home, people all over Ohio would come watch me fight. Hopefully, we can do that in the next year or two.”

On June 9, on Top Rank’s first card inside the MGM Grand “bubble,” Anderson knocked out Johnnie Langston in the third round, marking the first time in his first four bouts that an opponent made it out of the opening frame against him.

“It definitely was good to get some rounds under my belt,” Anderson said. “It kind of woke me up that you can’t knock everybody out (in the first round). I paced myself, picked my shots a lot more. That’s definitely what we’ve been working on.”

As an amateur, Anderson was a favorite to make the now-postponed 2020 U.S. Olympic team before he elected to turn pro and signed with manager James Price and co-promoters Top Rank and Antonio Leonard.

In the unpaid ranks, Anderson was a 2017 and 2018 U.S. national champion and also won a variety of other tournaments to make him the No. 1-ranked amateur heavyweight in the United States.

As a pro, his bouts have, of course, provided him with experience. But Anderson also gained experience perhaps even more valuable by serving as one of the main sparring partners for heavyweight world champion Tyson Fury when he was training in Las Vegas for the Feb. 22 rematch with Deontay Wilder that Fury won by one-sided seventh-round knockout.

“It was a huge experience. I loved everything about it,” Anderson said of his time in the Fury training camp. “Everybody was really down to earth. It was a great experience for me. I learned a lot. I grew as a person. I got the experience. Hanging with the sparring partners was a cool experience. We kind of tag-teamed Tyson trying to pick his brain. I wouldn’t change it for the world. It helped me out a lot and it just made me a better fighter.”

Anderson estimated that during the course of the training camp he sparred more than 30 rounds with Fury, who was very complimentary of the young prospect.

Anderson did not want to get into specific details of what went down between the ropes during the sparring sessions because what goes on in the gym should stay in the gym, he believes. But Anderson did allow, “I got hit, I hit him sometimes. I’ll use his words – I was a great asset. He said I was probably one of the slickest people he’s been in the ring with. Those are his words, not mine. I’ll use that to answer that question. If he said that about me I’d think I was pretty good work for him. He said I was one of the slickest people and sharpened him. After sparring he would say he liked the way I would push him to the limit versus hanging back just to be there. I was going at him, making him work.”

Arum said he watched several of their sparring sessions and came away very impressed with Anderson.

“I watched him spar with Fury at least twice a week and he was tremendous,” Arum said. “Fury had some other sparring partners and nobody gave him the work that Jared did. I just credit his work with Fury as showing that he has the quality to be a big-time heavyweight if not a champion. I really have high hopes for him. Tyson Fury told me that his work was an amazing contribution to him getting ready for the rematch with Wilder and he said the kid will absolutely be a world champ and is a real talent.

“He’s a charismatic kid, a nice kid with a good personality, he talks well and he’s a hell of a fighter. Everybody (at Top Rank) is high on him.”

Arum said Anderson will be back for another fight inside the MGM Grand “bubble” in August. For now, Arum plans to keep Anderson busy fighting essentially every month because “that’s how you build a kid like that up.”

Anderson is up for that and happy to be part of a heavyweight division that he believes has as much talent from the top down to the prospects as it has had in years.

“We’re bringing the division back to life,” Anderson said. “It was down in the dumps and now it’s really exciting.”

The resurrection of the lawful side of Jarell Miller in Jared Anderson. Hope he carry his nick well in his journey to become a heavyweight champion. :boxing:

Good strategy from Anderson. Eventually he'll get that fight against Miller.

Most fighters have poor nick names , the thing is trying to market yourself if it’s a long road and this one isn’t going to do him any favors . The lack of of creativity in boxing’s marketing never fails…

If it was his first, or it's to get under Millers skin, I'm all for it. Otherwise, it's lame taking someone else name. I am still a Miller fan. Don't care about the PEDs. Always loved rooting for a bad…

The Big Baby nickname has a BAD connotation and has got to go, period! I would rather see Jared The Plan Anderson! If someone asks, he could say his plan is to takeover the American Heavyweight scene or something like…