Jared Anderson: I Showed I Can Box, I'm Not Just a Puncher

At the MGM Conference Center in Las Vegas, heavyweight sensation Jared "The Real Big Baby" Anderson (6-0, 6 KOs) knocked out veteran Rodney Hernandez (13-10-2, 4 KOs) in four rounds, the first time Anderson has been pushed past the third round.

Anderson, from Toledo, Ohio, has won three fights inside the "Bubble" since June.

Anderson said, “We’re ready for everybody. We’re building up. Bob {Arum} is moving me perfectly. It was about getting those rounds in and showing I can really box. I’m not just a puncher. I know how to box, and I know how to stay on my back foot.

“I’m listening to the commentators more, getting a lot of learning experiences. It’s helping a lot {with me} taking my time and slowing down.” 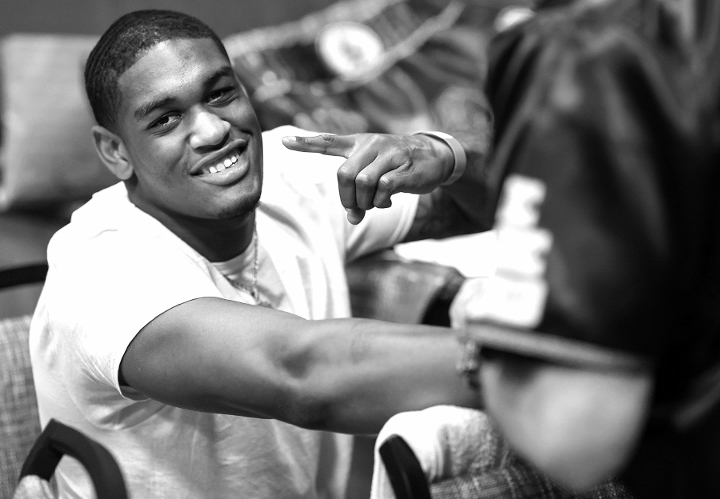 Welterweight Benjamin Whitaker (14-4, 3 KOs) upset the previously undefeated D'Andre Smith (8-1, 5 KOs) via six-round unanimous decision by scores of 60-54 2x and 59-55. Whitaker previously fought in the "Bubble" on June 25, when he dropped a majority decision to Vlad Panin.

Edward Vazquez (8-0, 1 KO) survived the stiffest test of his career, outlasting Adan Ochoa (11-2, 4 KOs) via unanimous decision (58-55 2x and 57-56) in a six-rounder at featherweight. Ochoa knocked down Vazquez in the second round, but Vazquez won the last four rounds on two of the judges' cards to pull away.

In a competitive four-round featherweight tilt, Philadelphia-born prospect Rashiem Jefferson improved to 2-0 with a unanimous decision over Jose Martinez (2-2, 1 KO) by scores of 40-36 2x and 39-37.

You showed that you know what “boxing” is. You haven’t shown you know how to box until you utilize it against a dangerous fighter.