James Wilkins has already secured a win to begin his 2020 campaign, but his greatest victory thus far has come outside of the ring and at the negotiating table.

The 24-year old junior lightweight is among a slew of prospects to have signed with Golden Boy Promotions, with the deal formally announced by the California-based outfit earlier this month. The pairing serves as the end result of a relentless pursuit by the transplanted New Yorker who gets to spend the next several years of his career fighting for the company of his dreams.

“I always knew they were the right fit for me,” Wilkins (9-1, 6KOs) told BoxingScene.com of joining their vast stable. “I reached out to them back in 2016 when I first turned pro.

“Patience has never been my strong suit, but I had to learn to trust the process. Obviously, they were watching and now I can finally call myself part of the family.” 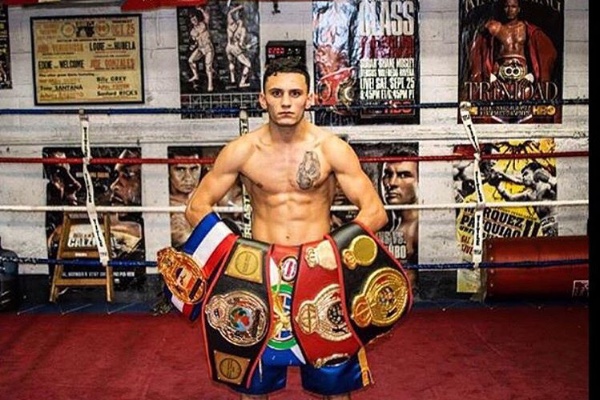 Helping broker the deal was Wilkins’ alliance with Elite Sports Entertainment & Management Group (ESEMG), with whom the Golden Boy brass sat down to formally make the rising prospect a part of the family. Wilkins—who now lives and trains in the greater Dallas area—has served as a de facto Golden Boy fighter for at least the past year, with each of his last two bouts coming on DAZN-streamed undercards.

“The whole team—(Hall of Fame former six-division champ and company founder/chairman) Oscar de la Hoya, Eric Gomez (president of GBP), Roberto Diaz (executive matchmaker)­—have always been good to me. Whether it’s getting me the right opportunity, or getting me ringside whenever a Golden Boy show is in town, I’ve always felt like part of the family, so it feels good to have made it official.”

Wilkins is coming off of six-round decision this past January at the Alamodome in San Antonio. The bout came six weeks later than when he expected to be in the ring, though not through any fault of Golden Boy. A planned undercard appearance on a DAZN show last November was scrapped three days prior to opening bell, when scheduled opponent Avery Sparrow passed out due to dehydration and was forced to withdraw.

The dilemma put Wilkins on ice, though with the assurance that he would resurface on a show that would prove to be a better fight along with the promise of greater glory to come.

Golden Boy made good on both offerings, with the next step now to get him back in the ring as early as possible.

“Hopefully by April or May I’ll be back in the ring,” notes Wilkins. “Right before I signed, the whole team sat down with me and explained that they had the ability to move me as fast as I wanted or as slowly as needed.

“Naturally, I want as much as possible as soon as possible. But it’s about trusting the process. I waited four years to sign with my dream promoter and have faith that the right opportunities will soon fall into place.”

[QUOTE=Dle;20417951]I actually thought that Oscar signed a black fight from this fights name.. gravely mistaken[/QUOTE] Lmao so did i. I've been saying for years that oscar should expand his stable. Instead of just relying on hispanic fighters and fanbase

Great move by Golden Boy. First they sign those two kids from Hawaii, then Shane Jr and now James Wilkins! All in one month. Great move!