An ugly fight that had become difficult to watch came to an unusual conclusion when Jamel Herring determined he couldn’t see out of his right eye Saturday night in Las Vegas.

Herring defeated Jonathan Oquendo by disqualification in their 130-pound title fight because the cut that caused Herring’s vision issue was caused by an intentional foul by Oquendo in the fifth round. Had referee Tony Weeks ruled that an accidental clash of heads opened Herring’s cut, rather than an intentional head-butt, their fight would’ve gone to the scorecards following the eighth round.

If that had happened, Herring would’ve won a unanimous technical decision. Judges Tim Cheatham (80-70), Julie Lederman (79-71) and Patricia Morse Jarman (80-70) all had Herring ahead by huge margins when the fight was stopped.

Their scheduled 12-rounder never reached the ninth round because a squinting Herring told his trainer, Brian McIntyre, and Weeks he couldn’t see once he returned to the corner following the eighth round. There initially was confusion in Herring’s corner because McIntyre and Herring weren’t sure if he would’ve lost because he told Weeks and a ringside physician that he couldn’t continue.

The unsatisfying ending notwithstanding, Herring, a U.S. Marine who served two tours of duty in Iraq, retained his WBO junior lightweight title in the main event of an eight-bout card at MGM Grand Conference Center.

“We knew coming in that he was gonna be aggressive with a head first,” Herring told ESPN’s Bernardo Osuna following his win. “It just kept repeating on the inside, you know, and Tony finally caught on to it. But I didn’t want to it to end like that.

Cincinnati’s Herring (22-2, 10 KOs) made the second defense of the WBO 130-pound championship he won by upsetting Japan’s Masayuki Ito (26-2-1, 14 KOs) by 12-round unanimous decision in May 2019 in Kissimmee, Florida. He hadn’t boxed since defeating Lamont Roach (19-1-1, 7 KOs), of Upper Marlboro, Maryland, by unanimous decision in their 12-rounder November 9 in Fresno, California.

Puerto Rico’s Oquendo (31-7, 19 KOs) has lost two of his past three fights. The 37-year-old Oquendo, the WBO’s 12th-ranked contender for Herring’s title, dropped a 10-round unanimous decision to Roach in the bout before Roach lost to Herring. 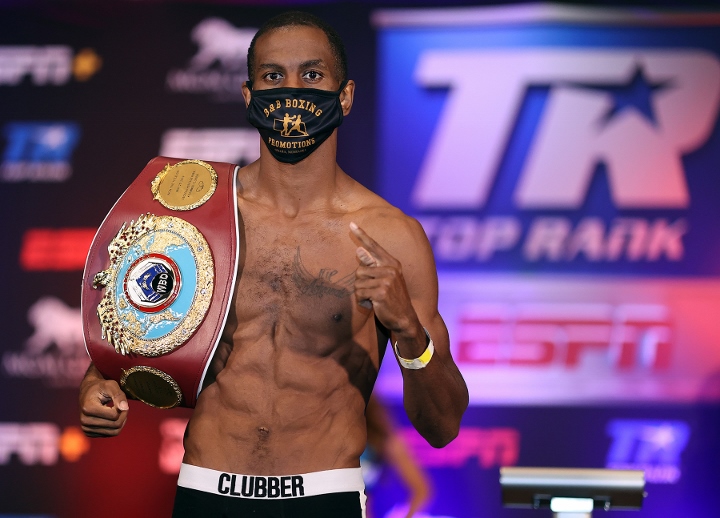 Northern Ireland’s Frampton (28-2, 16 KOs), who was supposed to face Herring on June 13 in Belfast, had hoped to challenge Herring before the end of 2020 at a site to be determined. The cut Herring sustained above his right eye Saturday night could keep the Herring-Frampton fight from occurring prior to the end of this year.

“It’s not just about getting the win, it’s how you look. And, you know, I’m a very harsh critic on myself, but it is what it is. Bob [Arum] spoke to me, told me just to rest because you guys know I’ve been through a 20-week training camp. So, you know, it is what it is. I can go home to my family. Hopefully, the cut isn’t that bad and, like I said, I still want the Carl Frampton fight next, by all means. November, December, whatever, I still want that fight next.”

Regardless of when he faces Frampton, his victory Saturday night ended a frustrating, grueling 2½-month stretch for Herring.

The 2012 U.S. Olympian’s fight against Oquendo was postponed from July 2 to July 14 when Herring divulged June 23 that he had tested positive for COVID-19. Their fight was delayed again July 13, the day Herring and Oquendo were supposed to weigh-in, because Herring failed another COVID-19 test.

Herring passed his test in the ring Saturday night, but the rugged Oquendo made matters tough on the defending champion.

A low left by Herring caused a brief break 1:10 into the eighth round and drew a warning from Weeks. Herring nailed Oquendo with a left and a right with just over 30 seconds remaining in the eighth.

Herring landed several left hands in the seventh round, but there was an inordinate amount of holding again during those three minutes. Herring and Oquendo spent much of an ugly sixth round clinching and wrestling for position.

Herring’s left hand knocked Oquendo off balance about 50 seconds into the fifth round. Weeks called for a break with 1:07 to go in the fifth round because Weeks ruled an intentional head-butt by Oquendo caused a bad cut above Herring’s right eye.

Weeks deducted a point from Oquendo for that foul after the fifth round.

With just under 40 seconds to go in the fourth round, Oquendo connected with a straight right hand. Oquendo landed another right just before the end of the fourth, but only after Herring hit him with a left hand.

Oquendo quickly got up and didn’t seem too hurt by Herring’s punch.

Herring landed a left uppercut and then a straight left in the final minute of the second round.

Herring slipped to the canvas barely five seconds into the fight. Once he got up, the rest of the first round was full of ugly clinches that limited the action in the opening three minutes.