Good things can happen when one significant umbrella has under its shade a big piece of a single weight class.

Right now, the PBC has planted a heavy stake in the welterweight division. It’s not just at the tippy top of the class either. Take a glance at the current TBRB ratings. Eight of the top ten are directly affiliated with the PBC and Mikey Garcia has only recently done new business elsewhere.

Already official for the fall, fans can look forward to clashes between #1 rated WBC/IBF titlist Errol Spence and #7 Danny Garcia and #9 Kudratillo Abdukakhrov versus #10 Sergey Lipinets. The next steps for WBA beltholder Manny Pacquiao, Shawn Porter, Keith Thurman, and Yordenis Ugas have yet to be formally announced but a combination of any of those four would be unsurprising.

Top Rank-promoted WBO titlist Terence Crawford really is, for now, a bit of an island to himself. Eventually he’s likely to see some of the rest of the significant part of his division but, as the wait rolls on, the PBC has a wealth of depth that allows them the luxury of quality, competitive fights without him.

This Saturday, fans get a glimpse at the next level of depth the PBC has invested in at welterweight.

While ratings from TBRB or Ring combine the whole of the division in a way sanctioning bodies don’t, sanctioning bodies are the reality of a lot of boxing’s framework. Climbing their rankings and getting shots at their belts is the surest path to bigger fights...and purses.

PBC fighters hold the top three spots in the WBC ratings (Porter, Garcia, Ugas), the top two for the WBA (Ugas/Garcia), the top two of the IBF (Abdukakhrov and Lipinets). 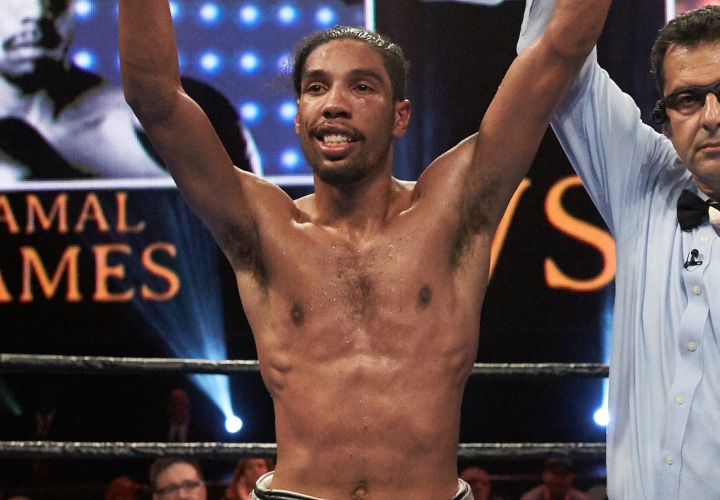 Saturday’s welterweight main event (Fox, 8 PM EST) pits 32-year old Jamal James against 30-year old Thomas Dulorme. James is rated fifth by the WBA, Dulorme tenth, and there is an interim belt for that organization on the line. Given the WBA’s lucrative, seeming belts-for-almost-everybody strategy, no one has to be excited by the title stakes.

They can at least be interested in the sweepstakes around it.

The winner of this fight is, on paper, closer to a shot at the big WBA belt. That’s the road to Pacquiao. The top two spots in the WBA ratings are held by Ugas and Danny Garcia. Both James and Dulorme have seen Ugas before in defeats. To get to Manny Pacquiao, might one of them have to see Ugas again?

Whether they do or don’t, the question’s existence shows a level of investment in one of boxing’s weight classes that is protected not just in the immediate lineup but also two or three fights ahead.

That’s a Don King at heavyweight in his heyday level of near checkmate on a single weight class.

James and Dulorme is a perfectly solid welterweight scrap between players just outside the top of the class. It should be entertaining. It’s also just an interesting lens to look at the way the sport moves new pieces of the big picture forward.

Is anyone really surprised that Vasyl Lomachenko-Teofimo Lopez has hit turbulence? While one can hope they figure this out, be thankful for the fighters who find a way to make meaningful fights while crowds are still held at bay. Plenty are going to hold off for as long as they can with contests that can be worth more with patience...Will the Mairis Briedis-Yuniel Dorticos fight happen in 2020? The second edition of the Cruiserweight WBSS is one for the record books...Mulan for $30 on Disney+ is still cheaper than going to the movies to see it. Losing the theatre experience would be terrible long term though and one hopes the big screen can make a big comeback post COVID...Stargirl might be the most fun page to screen comic book adaptation on television and it’s kid friendly. Luke Wilson is great there...Top Rank is moving the pieces at heavyweight right now in much the way the PBC is handling welterweight. They don’t have the same sort of spread in the top ten but they’re building a solid foundation of contenders.