Jake Paul's Trainer: As Sure As Sun Rises - Nate Robinson Will Get KO'd!

Living legends Mike Tyson and Roy Jones Jr. will square off on Saturday night at Staples Center in Downtown Los Angeles.  The heavyweight exhibition bout is scheduled for 8 rounds set at 2 minutes a piece. The California Athletic Commission has put in place strict rules with no knockdowns allowed and also will not permit the fight to be scored.

The bout has been generated worldwide attention and will be distributed by Triller for $49.99 in the United States. Former two-division champion Badou Jack will face unbeaten light heavyweight Blake McKernan and Youtube Sensation Jake Paul will take on former NBA star Nate Robinson on the undercard.

Paul won his professional debut in January when he stopped Ali Eson Gib in 1 round. He is trained by former world title challenger BJ Flores who has been very pleased with the progress Paul has made.

“He has an excellent jab and left hand. He understands how to break his man down by changing levels and jabbing to the body to set up other combinations. He has excellent speed and power and punches with both his legs and body,” said Flores.  “He really works his ass off and is fearless. Jake will surprise a lot of people on Saturday night!” 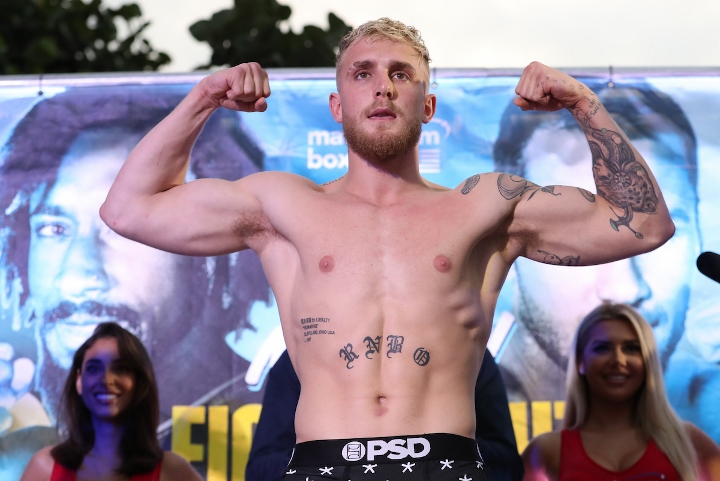 Flores believes that the 23-year-old Paul is much more advanced in the sport than other recent Youtube crossover fighters. He has been in the ring sparring with several top level professional fighters and has held his own.

“He has sparred over 250 rounds in total. 4-6 rounds at a time with at least 55 professionals over the last 12 months. As sure as the sun will come up tomorrow, Jake will win by KO!” Flores told BoxingScene.com.

Those fighters include names such as Ronald Ellis, J’Leon Love, Hasim Rahman Jr, and Ahmed Elbiali.

According to Flores, the time Paul has spent in the ring with top level competition has been the key to his rapid development.

“Jake’s ring IQ is extremely high for his level of experience. The reason for this is hundreds of rounds with very good professional fighters over the last 12 months. Jake has been in very high level sparring with heavyweights, cruiserweights and light heavyweights. He is learning very quickly how to adapt to different styles . Saturday night won’t last long. Do not get up to get a drink,” said Flores.