Jake Paul: Nate Robinson's A Little Bit Of An Assh-le, But I'm Still A Fan

Only in 2020 can a petty feud between a YouTube celebrity and a former NBA star produce a prizefight that will come at a premium.

This was the fight Jake Paul wanted from the moment he felt slighted after being denied a photo opportunity with three-time NBA Slam Dunk champion Nate Robinson. Several months and endless hours of trash talk later, they get to settle their differences in the ring.

Their scheduled six-round cruiserweight bout serves in supporting capacity to a matchup of 50+ year old ring legends Mike Tyson and Roy Jones atop a Triller Pay-Per-View event this Saturday, live from Staples Center in Los Angeles, California. On paper, it—sadly—represents the most competitive sanctioned fight of the night. It has certainly drummed up more attention than any other fight on the undercard, a rivalry born from fandom.

“I’m a huge fan. I’m Nate Robinson’s number one fan,” insists Paul (1-0, 1KO), an outspoken YouTuber from Cleveland who now lives in Calabasas, California. “I actually got one of his jerseys. There was only one left. Every time I wear it, I say ‘Wow, I’ve never seen one of those before.’ I’m a huge Nate Robinson fan.

“I asked him for a picture [at the start of the promotion]; he said no. I guess he doesn’t take pictures with his fans. I guess he’s a little bit of an assh-le, but it’s OK. I’m still a fan.” 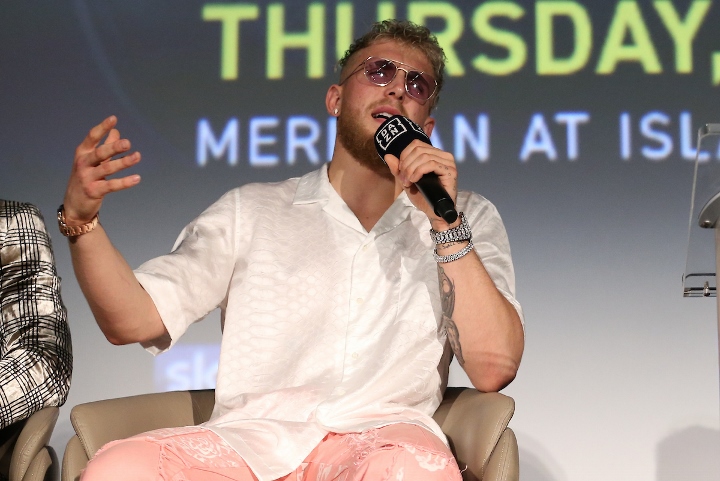 Robinson—who makes his pro debut—doesn’t deny the incident in question.

“I don’t take pictures with fake fans like him,” explained the multi-sport athlete, who was also a standout college football player before embarking on an 11-year NBA career which ended in 2016. “I only take pictures with real fans.”

Paul plans to use the snub as motivation for his second fight of 2020. The 23-year old turned pro at the start of the year, making quick work of fellow YouTube personality—and considerably less-talented boxer—AnEsonGib in scoring a 1st round knockout this past January.

The feat was initially poised to set up a grudge match with British internet rapper KSI, whom outpointed Paul’s older brother Logan last November in this very venue. The ongoing coronavirus pandemic stalled those plans, with Paul instead setting his sights on the compact Robinson who is on a quest to enter his name amongst the greatest pure athletes of all time.

His opponent suggests he would’ve been better off sticking with sports that he actually knows.

“The problem is that I’m going to be bouncing his head off the canvas,” claims Paul, who is a healthy betting favorite heading into the fight. “That’s the only thing that’s going to be dribbling on Nov. 28 is his head.”

And this is why UFC may soon overtake boxing...

Nate Robinson should do a ring walk carrying a prosthetic copy of Jake Paul's head....... then slam dunk it. Go full on WWE.

Yeah Jake deff helping with the buys even with just his promotion of the event on all of his social media profiles not to mention him being on the card.

[QUOTE=moltres.;20913950]the real reason its broke ppv records is this dude with a 'billion' followers.[/QUOTE] Ok, that makes more sense. I was kind of baffled by all the talk of breaking pre fight PPV sales.

the real reason its broke ppv records is this dude with a 'billion' followers.