They landed within six punches of each other in 10 of 12 rounds. Uneven performance by Jaime Munguia, looking for the KO all night in front of his hometown fans. Munguia landed an avg. of 10 of 56 punches per round to 10 of 41 for Dennis Hogan, who appeared to land the harder punches all fight. 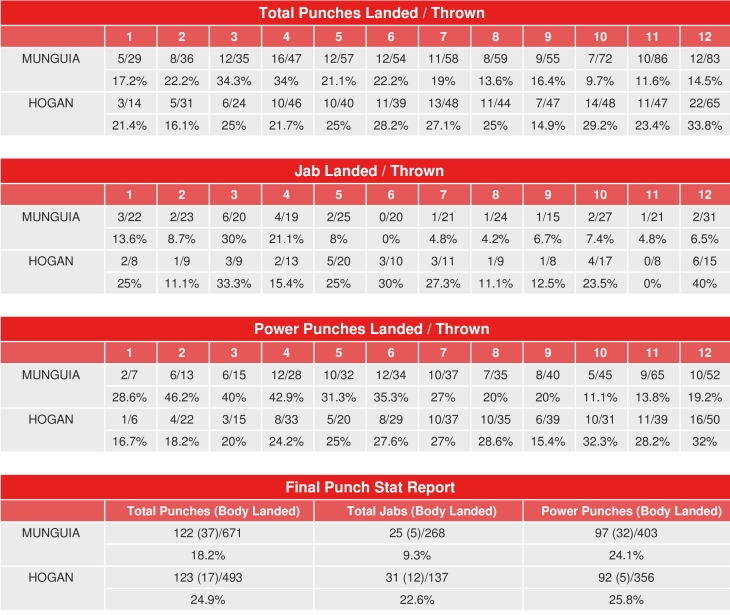 Dennis Hogan described his loss to Jaime Munguia as "bad for boxing" after the Mexican won a controversial majority decision victory in their WBO junior middleweight championship bout.

But the 22-year-old may consider himself fortunate, with many independent observers feeling Hogan was hard done by.

Mounting the fourth defence of his strap, Munguia (33-0) struggled to assert himself against Hogan's nimble footwork during the opening five rounds, before finally bringing his trademark body blows to bear against the 34-year-old Irishman.

Undeterred, Hogan held his own and returned fire, even threatening to knock Munguia down with an overhand right in the 11th, while the incumbent had the better of the final round without scoring a decisive blow.

[QUOTE=chrisJS;19662700]Doesn't that contradict your point about accuracy mattering not one bit at all? So what is it? Accuracy matters only when conveniently favoring your wanted outcome? You said this But now your saying accuracy does count when it's a total…

[QUOTE=Mexican_Puppet;19662690]My point is that GGG thrown almost 80 more power punches than Nelo So, Canelo was better by a little.[/QUOTE] Doesn't that contradict your point about accuracy mattering not one bit at all? So what is it? Accuracy matters only…

[QUOTE=chrisJS;19662649]He had 4% better accuracy. In your opinion what is a bigger difference in accuracy. 4% or 40% (from your hypothetical that accuracy doesn't matter at all)?[/QUOTE] My point is that GGG thrown almost 80 more power punches than Nelo…

[QUOTE=Mexican_Puppet;19662592]But GGG thrown almost 80 more power punches, Canelo had better accuracy. Nope, i scored 115-113 the Sor Rungvisai vs Estrada fight and I was rooting for Juan.[/QUOTE] He had 4% better accuracy. In your opinion what is a bigger…