In excellent physical condition, and without any weight problems, the new WBO super welterweight world champion Jaime Munguía of Mexico closed the strongest part of his preparation in Los Angeles, under the supervision of experienced coach, Robert Alcázar.

Munguía (32-0, 26 KO's) will be making the fourth defense of his title against his official challenger, Dennis "Hurricane" Hogan (28-1-1, 7 KOs) on Saturday April the 13th, at the Arena Monterrey, in a co-promotion of Zanfer and Golden Boy that will be transmitted by DAZN and Azteca 7.

The world champion, originally from Tijuana, worked intensely during twelve rounds of sparring, and showed his quality, aggressiveness and characteristic condition, but this time, he looked faster and more mobile. 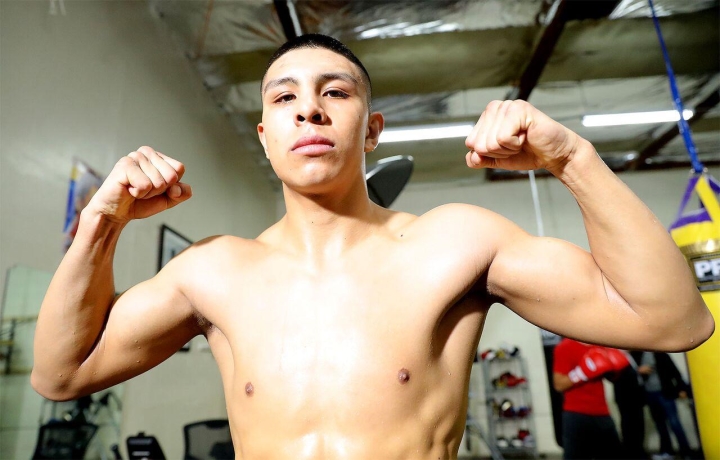 Ten days before their fight against Hogan, the Munguia team is pleased with the preparation, and how the physicist of the 22-year-old world champion assimilated and reacted to the workloads, since his performance is full and the recovery factor impresses.

"We are ready. I feel very fast, very strong and very motivated to defend my championship in Monterrey. We are going to give a great fight and give everything so that the title stays in Mexico," said Munguía.

While his career promoter, Fernando Beltrán, CEO of Promociones Zanfer, said he was very satisfied with the great camp that Munguía did in California.

"I saw him last Monday and Jaime continues to impress me with his dedication and discipline in his training, combined with his talent, we do not doubt that at the Arena Monterrey he will make another great demonstration of his unlimited potential," said Beltrán.

The champion will be fulfilling some promotional commitments and will travel to Monterrey next Monday. The rest of his preparation will be focused on the ease and maintenance of his condition and weight.

The WBO designated Mexico's Miguel Canul as the referee. The judges will be Americans Aaron Young, Ivette Roldan and Joseph Levin, and Frank J. Gentile will act as supervisor.

When this "staying active" young man actually fights some one with a pulse , let us know. Until then he can carry on padding his record with his "bum of the month" corpses. It will catch up with him eventually.

[QUOTE=pillowfists98;19635420]Munguia is a machine! I wish all world champions were as active as he is.[/QUOTE] Exactly they're all too busy looking for their next easy win and huge payday instead of staying active!

Hogan has the same 'trainer' as Horn so I don't see him winning this. Only 7 KO's out of 28 fights is not that great either.

I know Hogan is past his best. But what is Munguia going to do when he wraps him up with those 24 inch pythons. When the hearts and souls of 15000 screaming....Oh wait. Wrong Hogan. My bad.

ADD COMMENT VIEW COMMENTS (6)
Advertisement
Top Headlines Alex Saucedo vs. Arnold Barboza Jr. To Co-Headline Lomachenko-Lopez On 10/17 Erickson Lubin: You Could See How Much I've Changed Since The Charlo Fight Jaron Ennis: I Might Have To Get Into A Mandatory Position To Get A Title Shot Ajagba: Time Away From Ring Was Frustrating, Hurts To Not Be Able To Do Something You Love Nyambayar: I Had A Sprained Ankle Against Gary Russell; I'd Love A Rematch Lubin: I'm Fresher, Hungrier Than Lara & Trout; Looking To Make Statement Against Gausha Pedraza: I Think Lomachenko Will Dominate Lopez, But He Can't Get Reckless Daily Bread Mailbag: Charlo Brothers, Ennis, Canelo, Spinks, More BoxingScene.com's Television Pick of The Week - September 19 McKenna: Beating Ohara Davies Will Be Highlight of My Career Joe Joyce: We'll See if Dubois Can Take My Heavy, Powerful Shots! Frank Warren: Whyte Received Shorter Medical Suspension Than Spelman? Francis Chua Aims To Fight, Looks To Kambosos, NG, MacKenzie Boxing Facing Financial Adjustments Johnny Nelson Confident Whyte Would Have Benefited With Tibbs in Corner Vijender Singh Hopes To Resume Career Before Year is Over Josh Taylor Must Remain Focused on Khongsong, Says Ben Davison Javier Molina: Pedraza Looked Good With LesPierre - I'm No LesPierre! Amir Khan Appointed as President of WBC Middle East Boxing Council Ajagba vs. Rice, Ramirez vs. Caraballo - Ready To Fight Jose Pedraza, Javier Molina - Set For Showdown in Las Vegas Pedraza-Molina ESPN+ Weigh-In Report From The Bubble Ennis vs. Abreu, Nyambayar vs. Breedy - Set For Bouts Erickson Lubin, Terrell Gausha - Ready For WBC Eliminator Haven Brady Jr. Inks Promotional With Top Rank Crawford vs. Brook Negotiations at Advanced Stage For November 14 Zhang Zhilei Inks Promotional Pact With Eddie Hearn Juan Carlos Abreu Comes In 3-Plus Pounds Overweight For Jaron Ennis Fight Rene Tellez-Giron Return Pushed Back Due To COVID-19 Terrell Gausha: I Was Nervous That I Wouldn't Get This Fight Again Teofimo Lopez: Lomachenko Is On His Way Out, I'm Looking Through Him Jermell Charlo: I Don't Want Judges To Make Decision For Me Against Rosario Hearn on Yarde-Buatsi: It's a Massive Box Office Fight at The O2 Abreu: Either Jaron Ennis Knocks Me Out Or I Will Knock Him Out Bilal Fawaz Inks Agreement With MTK Global Lewis Ritson Vows To Fight His Way To a WBA Title Shot Fury vs. Joshua: Hearn Says Deal On The Verge of Being Put on Paper Graveyard Shifts At Warehouse Motivated Molina To Turn Around Boxing Career News: Alejandro Santiago, Faust, Demirezen, Tarimo vs. Fleming Josh Taylor: Me vs. Jose Ramirez is One of The Biggest Fights in Boxing
Advertisement
Latest Boxing Videos 'The Journey - Charlo Doubleheader' 30 Minute Special Showtime Releases Trailer For Documentary 'Ringside' Charles Martin Reacts To Helenius Stopping Kownacki Robert Helenius Reacts To Shocking TKO of Kownacki Adam Kownacki Reacts To TKO Defeat To Helenius Joseph Parker Reflects on Fury-Wilder, Talks Return Mikey Garcia Reflects on Fury-Wilder, Talks Vargas Eddie Hearn Reflects on Fury Stopping Wilder, More Kenny Porter Reacts To Tyson Fury Stopping Wilder Jose Ramirez Reacts To Tyson Fury Stopping Wilder
Recent Top Stories Graveyard Shifts At Warehouse Motivated Molina To Turn Around Boxing Career Erickson Lubin vs. Terrell Gausha: The Play-In Derevyanchenko Vows: I'm Ready For Everything in Charlo Fight Remembering "The Showdown" – Still a Thrill After 39 Years
Advertisement
Latest Forum Threads
Advertisement
Advertisement
This website may contain adult language.
TM & © 2020 BoxingScene. All Rights Reserved.