Jaime Munguia Will Make Defense in December or January

WBO 154-pound titlist Jaime Munguia has had an incredibly productive 2018.

Seemingly coming out of nowhere, he has not only won a world title back in May, but he has already made two title defenses of that belt. He has fought five times this year and there's a chance he might get a sixth bout.

"He'll fight in either December or January, we're in discussions for that now," said Eric Gomez, the president of Golden Boy Promotions, who has a piece of Munguia alongside his lead promoter, Zanfer Promotions. "We're talking to our partner, Fernando Beltran, and we'll have information on that shortly. There's a few options for him and whatever's a better option, Fernando is going to decide and we'll go from there." 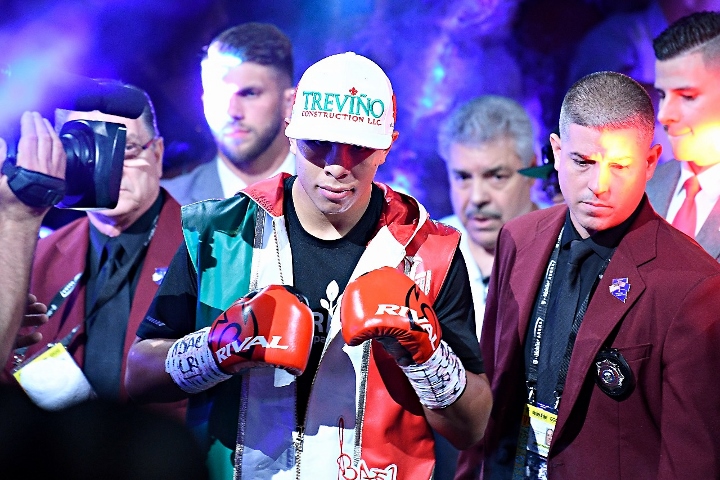 The original plan had called for Munguia (31-0, 26 KO's) to return on December 8th on an HBO card - but with Golden Boy now affiliated with the DAZN streaming service (through their new deal for Saul "Canelo" Alvarez) look for Munguia's next bout to be on this platform.

After two bouts in Mexico to kick off 2018, Munguia was tabbed as a late replacement to fill in for Liam Smith to face Sadam Ali for the WBO title on May 12th and he promptly bludgeoned him over four rounds.

Since that point he defeated Smith on July 21st via decision and then hammered Brandon Cook in three on the Alvarez-Gennady Golovkin undercard on September 15th.

As for a long-term partnership with Golden Boy and Zanfer for Munguia, Gomez stated to BoxingScene - "I'm hopeful that's going to be a possibility. We have a very good relationship with Fernando, he's very, very happy and he's the promoter. We're partners with him in the U.S. - so I feel that right now that they're very happy with everything that we've accomplished with them and what we've done with him. So I would hope so.

"Obviously, I'm going to do my best to ensure that he stays with us in the long run."

[QUOTE=GlassJoey;19217800]Will Munguia be able to make the 10lb rehydration limit with IBF? He looked like a cruiserweight vs Liam smith[/QUOTE] I doubt that Hurd only adds 10lbs after rehydrating against Lara he was in the low 170's so I know…

they are handling him with floyd like pillow gloves.

I like his activity rate, puts some of these one fight a year cats to shame

[QUOTE=whoseyourdaddy;19217870]Oh please! he weighed 168 vs Ali, and about the same for Smith, if am not mistaken Smith weigh close to 170. If you want to talk about weigh, lets review the current weight for Charlo 172-175 fight night, Hurd…

[QUOTE=whoseyourdaddy;19217870]Oh please! he weighed 168 vs Ali, and about the same for Smith, if am not mistaken Smith weigh close to 170. If you want to talk about weigh, lets review the current weight for Charlo 172-175 fight night, Hurd…