The 12-round bout will take place at Dignity Health Sports Park (formerly known as the Stubhub Center) in Carson, California. Also on the card, unbeaten lightweight Ryan Garcia will finally return to the ring, squaring off against Avery Sparrow.

Both fights will stream live on DAZN.

Munguia (33-0, 26 knockouts), who resides in Tijuana, Mexico, last fought on Apr. 13 in Monterrey, Mexico, defeating mandatory challenger Dennis Hogan of Australia in a fight many thought Hogan did enough to win. Before Allotey was finalized as an opponent for Munguia, there were several reports last week Munguia would face former world titleholder Jessie Vargas, but negotiations reportedly fell through between representatives of both fighters. 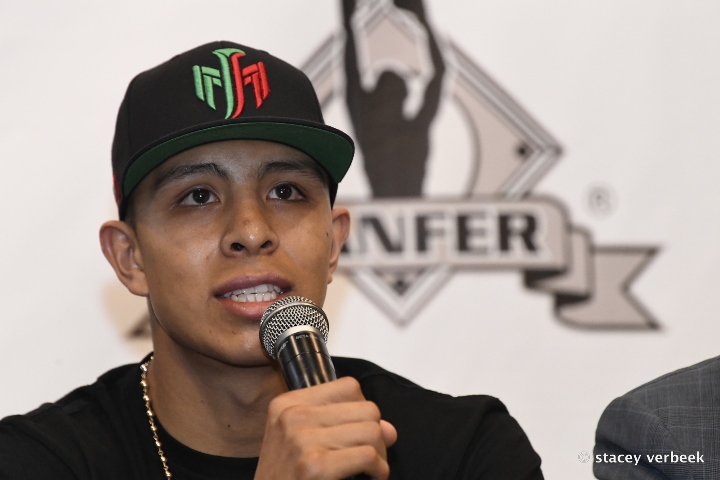 The 22-year-old Munguia will be making his fifth defense of the WBO title he won on May 12 of last year by knocking out Sadam Ali. The world-title defense will also be in conjunction with Mexican Independence Day weekend celebrations throughout Southern California.

"I feel very happy for the opportunity of headlining a card on Sept. 14," said Munguia, who is trained by Robert Alcazar. ”That's the best date for boxing in the entire year. It's a great date for Mexico because that's when we celebrate Mexican Independence Day. I'm proud and honored to be representing Mexico in the festivals for my country. I'll give my best and I'll try to deliver a great fight for all the people and for those who will see us."

Munguia is co-promoted by Golden Boy and Zanfer Promotions. He is ranked No. 4 by The Ring.

"I respect Munguia," said Allotey. “He is a great fighter, but I'm an African warrior, so you know I'll be coming to cause a big surprise."

Sept. 14 will mark Allotey’s second fight in the United States. Allotey was knocked out by contender Patrick Teixeira in April of 2015 in Verona, New York.

After reports of managerial disputes, which kept him out of the ring for the last several weeks, Garcia (18-0, 15 KOs) will return to action since his second round knockout win over Jose Lopez on Mar. 30.

Garcia, who turned 21 on Thursday, has stopped his last two opponents, both of them having occurred under the tutelage of trainer Eddy Reynoso, who also trains Canelo Alvarez.

"Sparrow is basically an undefeated fighter with a good amateur background,” said Garcia, who resides in Victorville, California and will also trains alongside Alvarez in San Diego. "People in boxing that know boxing will know this isn't an easy fight. It will not be overlooked."

The 25-year-old Sparrow (10-1 1 NC, 3 KOs) defeated Hank Lundy by majority decision in his last bout on Mar. 15 in his hometown of Philadelphia. Sparrow’s previous fight against Jesus Serrano on Mar. 9 of last year was a originally a knockout victory, but the result was overturned by the Pennsylvania Athletic Commission to a no contest because Sparrow failed a drug test.

Sparrow also defeated Jose Lopez and does have two victories over unbeaten fighters.

"Ryan Garcia has yet to be tested, and it's a big step up for him.," said Sparrow, whose only loss was by disqualification in his fifth fight as a pro. "It's not much of a step-up in opposition for me. It's his biggest test, not mine. I'm good fighting at 130, but nobody wants to fight me there, so I'm moving up to 135. I look forward to putting on a great show."

Also on the card, junior welterweight contender Pablo Cesar Cano (32-7-1, 22 KO) of Tlalnepantla, Mexico, will face Newark, New Jersey’s Michael Perez (25-3-2, 11 KOs) in a 12-round bout. Cano scored a shocking first round knockout of Jorge Linares in his last bout on Jan. 18.

[QUOTE=Southpaw010;19977988]If Golden Boy didn't have Canelo they would probably go under. There's a reason all the really good fighters jumped ship for PBC. Jaime Munguia is an absolute fraud. I wish they would of put him in with GGG for…

he beat hogan easily. now he’s going to knock out this guy out on mexican independence day for his gente. the only pbc fighters worth a damn are benavidez and ruiz. all the rest are trash

If Golden Boy didn't have Canelo they would probably go under. There's a reason all the really good fighters jumped ship for PBC. Jaime Munguia is an absolute fraud. I wish they would of put him in with GGG for…

[QUOTE=Southpaw010;19977897]Total joke and fraud he and Golden Boy is. He f ucking lost to Hogan didn't give him the rematch they promised directly after the match. [B]Then pussed out of the Vargas fight by forcing him to fight at 156…