Jaime Munguia beat up Canadian contender Brandon Cook on the Canelo Alvarez-Gennady Golovkin undercard at T-Mobile Arena. Tijuana’s Munguia (31-0, 26 KOs) knocked down Cook in the third round and continued to assault Cook until referee Tony Weeks stopped their scheduled 12-round, 154-pound title fight at 1:03 of the third round.

The 32-year-old Cook (20-2, 13 KOs) lost by technical knockout for the second time in his past four fights. Kazakhstan’s Kanat Islam (25-0, 20 KOs) stopped Cook in the ninth round of their bout last September 9 in Astana, Kazakhstan. 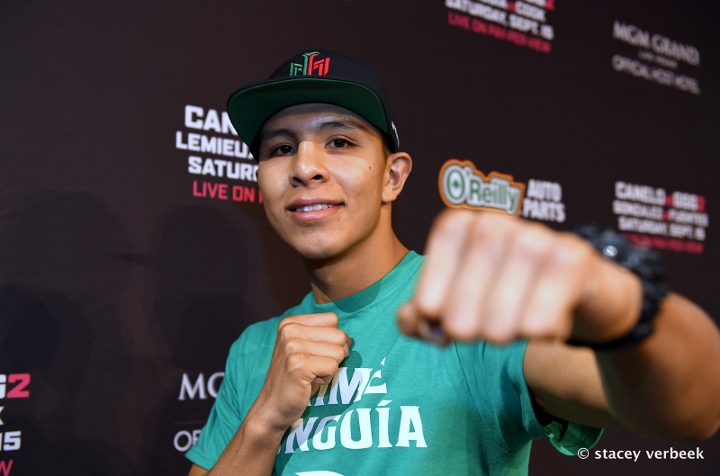 The 21-year-old Munguia made the second defense of the WBO junior middleweight title he won by destroying Sadam Ali four months ago. Munguia floored Brooklyn’s Ali (26-2, 14 KOs) four times in that fight and stopped him in the fourth round May 12 at Turning Stone Resort Casino in Verona, New York.

Munguia wasted no time in making his first title defense against mandatory challenger Liam Smith (26-2-1, 14 KOs). He dropped England’s Smith in the sixth round and out-pointed the former WBO 154-pound champion in their 12-rounder at Hard Rock Hotel & Casino in Las Vegas.

His third fight in four months was even shorter than his demolition of Ali.

Cook tried to take the fight to Munguia at the start of the third round, yet quickly found himself on the wrong end of a Munguia barrage that sent Cook to the canvas. Munguia also appeared to hit Cook while he was down.

A game Cook got up and continued, only to have Munguia swarm him. Weeks wisely moved in to save Cook from further damage as Munguia unloaded head and body shots on him.

An overhand right by Munguia moved Cook into a neutral corner late in the second round.

Munguia viciously assaulted Cook toward the end of the first round.

He hit the challenger with an overhand right that knocked Cook into the ropes with about 30 seconds to go in the opening round. Munguia then followed Cook to his Cook’s corner and unloaded a barrage of head and body shots that left Cook covering up.

Munguia vs Julian Williams y'all

[QUOTE=1hourRun;19105902][IMG]https://i.imgur.com/iYMgJzF.gif[/IMG] This Jaime Munguia even punched Tony Weeks! Jaime Munguia is wild, sloppy and reckless but fun to watch the clown perform.[/QUOTE] When they hug, Munguia hits Cook at the back of the head, and after he takes a knee,…

[QUOTE=1hourRun;19105902][IMG]https://i.imgur.com/iYMgJzF.gif[/IMG] This Jaime Munguia even punched Tony Weeks! Jaime Munguia is wild, sloppy and reckless but fun to watch the clown perform.[/QUOTE] “The clown” Someone ban this racist prick.

Why oh why, Jamie Munguia, you didn't end matters in the second so that I would have won a nice lump? Rats.

[QUOTE=HarvardBlue;19103331]Munguia launches himself a cross the ring with no regards for defense. He's Chris Arreola if Arreola was a terrible boxer.[/QUOTE] I thought it was just me :lol1:. He'll throw a barrage of punches, then step back and dance on…