His answer consisted simply of common sense, and wasn’t meant as a slight toward his former sparring partner. The newly crowned, 31-year-old IBF middleweight champion cannot envision fighting Derevyanchenko again unless the Ukrainian contender captures one of the other 160-pound championships.

“A rematch with Sergiy?,” Jacobs asked during a post-fight press conference early Sunday morning. “You think that makes sense right now? If he was to prove himself or maybe capture a title, maybe. But that’s not even my thought process right now. I’m going for the bigger, better opposition. Not to say that he wasn’t that, meaning bigger fights, marquee fights, the fights that will solidify my legacy. We’re looking for those fights.” 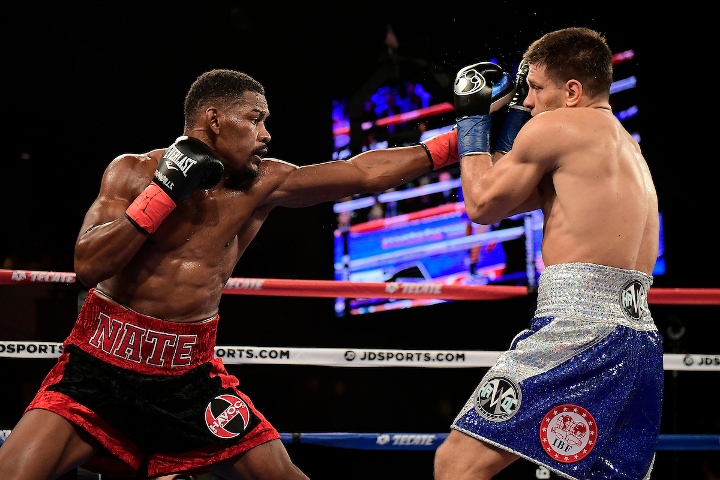 Jacobs recognizes, though, that Derevyanchenko provided one of the three most difficult fights of his career, along with his fifth-round, technical knockout loss to Dmitry Pirog in July 2010 and his close points loss to Gennady Golovkin in March 2017.

Brooklyn’s Jacobs (35-2, 29 KOs) beat Derevyanchenko by split decision in their 12-round fight for the vacant IBF title late Saturday night in The Theater at Madison Square Garden. Judges Tom Schreck and Steve Weisfeld both scored their fight 115-112 for Jacobs, while judge Julie Lederman had it 114-113 for Derevyanchenko.

The 32-year-old Derevyanchenko responded to a flash knockdown late in the first round by testing Jacobs throughout an action-packed, back-and-forth fight contested at a very high skill level. Jacobs just hopes he receives real credit for defeating Derevyanchenko (12-1, 10 KOs), who wasn’t well-known among American boxing fans before they battled in a main event HBO televised.

It was a close fight.

[QUOTE=WBC WBA IBF;19232105]WBA changed the rule years ago. World champion is no longer automatically mandatory to the super champion. WBA can make it up as they go along. That's why Povetkin was Joshua's mandatory instead of Charr.[/QUOTE] That's unfortunate then,…

[QUOTE=Fanofreason;19232345]DAZN isn't gonna last buddy. Have you heard about the subscriber #s?[/QUOTE] how many subscribed after the Nelo deal ?

[QUOTE=Fanofreason;19232345]DAZN isn't gonna last buddy. Have you heard about the subscriber #s?[/QUOTE]You make a very good point but what is going to happen to all those Middle and Super middleweights champions they have? Are they going to leave also? Also,…

[QUOTE=champion4ever;19231186]From the sounds of things, he seems like he may be headed back to the PBC. He keeps calling out Jermall Charlo. Let's just hope for us boxing fans sake that he doesn't. He has many more opportunities of fighting…