Two days after securing a huge victory in the courtroom, Julio Cesar Chavez Jr. fell prey to the toughest opponent of his career—the scale.

A currently scheduled non-title fight between the second-generation boxer and Brooklyn’s Daniel Jacobs will now take place at a modified catchweight of 173 pounds. An agreement was reached between the pair of former middleweight titlists—which includes an undisclosed settlement payable to Jacobs—after it was revealed that Chavez Jr. would be unable to comply with the previous contracted limit of 168 pounds.

ESPN Deportes’ Salvador ‘Chava’ Rodriguez was the first to report the development. 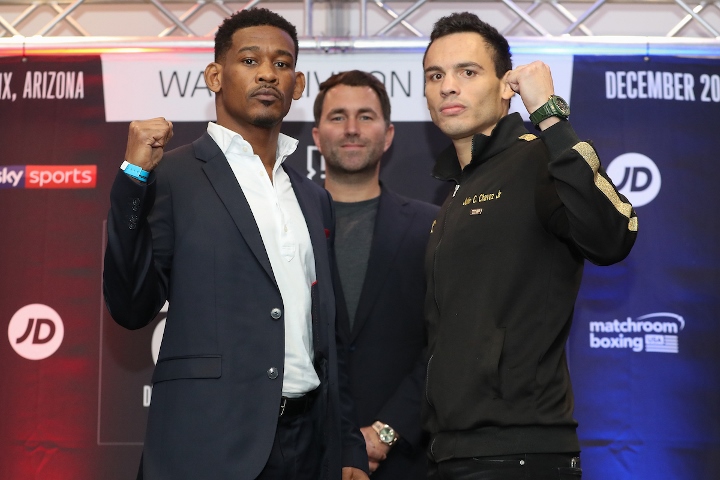 Both boxers have since weighed in ahead of Thursday’s formal ceremonial weigh-in for their 12-round main event, which takes place Friday evening live on DAZN from Talking Stick Resort Arena in Phoenix, Arizona. Jacobs (35-3, 29KOs)—who earlier in the week insisted he was already close to the original fight weight—was true to his word, weighing in at 167.9 pounds. Mexico’s Chavez Jr. (51-3-1, 33KOs) tipped the scales at 172.7 pounds, the second heaviest of a 16-year career that has fallen miserably short of honoring the legacy left behind by his father, Hall of Fame former three-division titlist Julio Cesar Chavez Sr.

Sources on location have confirmed to BoxingScene.com that a rehydration clause is not in place, as first revealed through social media by The Athletic’s Mike Coppinger.

The bout marks Jacobs’ super middleweight debut, although now technically a light heavyweight contest. The former two-time middleweight titlist declared himself done with the 160-pound division following a competitive but clear 12-round loss to Saul ‘Canelo’ Alvarez in their three-belt unification bout this past May.

Efforts to get Chavez Jr. to this point have included a lengthy legal battle with the Nevada State Athletic Commission (NSAC), in efforts to free himself of a temporary suspension assigned by the commission. The suspension came about after Chavez Jr. evaded drug testers contracted by Voluntary Anti-Doping Association (VADA) per a random drug test ordered by NSAC upon a filed request for the Dec. 20 event to originally take place in Las Vegas.

The commission argued it reserved the right to order a random test for any requested fight in-state, with Chavez Jr’s history—which includes separate suspensions for twice testing positive for banned substances—serving as a qualifying circumstance. Lawyers for the former titlist successfully argued that the commission “lacked subject matter [jurisdiction] to issue the suspension,” given that Chavez Jr. was neither licensed by Nevada nor had an active Federal ID at the time.

With the ruling came clearance to fight, only for Thursday’s development to serve as a reminder of another matter which has plagued his career.

The mid-fight week renegotiation mirrors that of Chavez Jr’s first fight with Brian Vera, also originally slated as a super middleweight title fight and with a subsequently agreed-upon 173-pound catchweight. Chavez Jr. won the fight by 10-round decision, in what was his first fight since his title-losing effort to Sergio Martinez in Sept. 2012, the first loss of his career and which was also followed by a suspension and $900,000 fine after testing positive for marijuana.

Chavez Jr. would go on to beat Vera a second time some five months later, this time making weight. It would be the end of his good fortunes and ring activity for the year, showing up out of shape in a one-sided stoppage loss to Andrzej Fonfara in April 2015. He returned to the win column three months later, although missing weight in his eventual 10-round decision over Marcos Reyes.

Hefty penalties were in place in the event Chavez Jr. missed weight for his May 2017 catchweight contest versus countryman Saul ‘Canelo’ Alvarez. Both boxers came well within the 164.5 pound contracted limit, with Chavez Jr. going on to suffer a one-sided 12-round loss.

It was his last fight for more than two years before resurfacing this past August, showing up at a career heaviest 175¼ pounds for his 86-second blitzing of Evert Bravo. The ring return eventually set up a lucrative showdown with Jacobs, though one which continues to carry fanfare for all the wrong reasons.

Interestingly, Philadelphia’s Gabriel Rosado was granted an undercard slot while also serving as an insurance policy in the event Chavez Jr. was unable to contractually honor the fight. All of the aforementioned circumstances certainly qualify, yet Rosado (24-12-1, 14KOs)—who trained at Wild Card Boxing Gym in Hollywood along with Chavez Jr. for this card—remains relegated to the undercard, as he faces Mexican southpaw Humberto Gutierrez (33-8-2, 22KOs) in a scheduled 10-round contest.

[QUOTE=Beercules;20268690]Yeah, what did happen with Jacobs Charlo? That's a good fight to make Boy had Charlo shook. It was funny.[/QUOTE] Camp has to say about being called out by DJ after the Chavez debacle. So far crickets.

Jacobs shouldve walked and let this bum retire. No way he should be fighting him at this catchweight!!!!!

[QUOTE=ThomasJK;20268663]I have the sub to DAZN so i will watch the fight. I didnt buy it NOT to watch the offerings. May not be the best match up, but it is what it is. What ever happenned to the Jacobs/Charlo…

I have the sub to DAZN so i will watch the fight. I didnt buy it NOT to watch the offerings. May not be the best match up, but it is what it is. What ever happenned to the Jacobs/Charlo…