A 160-pound title unification bout between them undoubtedly would be intriguing. It should be easy to make, too, because Eddie Hearn’s Matchroom Boxing USA promotes Andrade (26-0, 16 KOs), who owns the WBO middleweight title, and Jacobs (35-2, 29 KOs), the new IBF champ.

Just don’t expect to see it at any point soon. Jacobs said following his split-decision victory over Sergiy Derevyanchenko on Saturday night that his close relationship with Andrade will probably prevent their fight from happening in “the near future.” 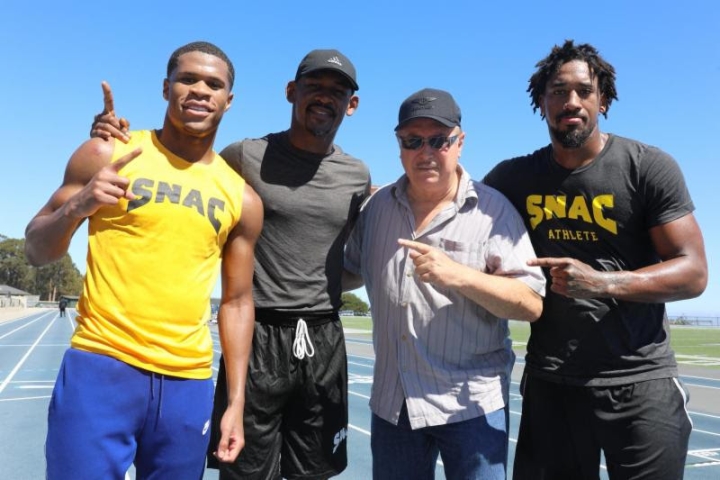 Andrade and Jacobs trained together and sparred against one another recently for their respective points victories over Walter Kautondokwa (17-1, 16 KOs) and Derevyanchenko (12-1, 10 KOs). They’ve also been friends since they were teenage amateurs and have a closer relationship than Jacobs has with Derevyanchenko, another frequent sparring partner.

“I’m up for any fight that makes sense,” Jacobs said, before referring to Andrade by his nickname. “Me and ‘Boo Boo’ had a discussion before, that we would only do it for the big bucks and we would only do it for unification. But if it’s a fight that makes sense for the near future, we can’t go against it. That’s like my brother, though. We have an understanding, but if an upset happens – which it always does in boxing, you can never dictate what happens – we’ll have to see for the near future.

“But I have no plans of fighting him. Is it something that I wanna do? Absolutely not. It’s not like a Peter Quillin or a Sergiy Derevyanchenko, where we’re just associates. Like I’ve known ‘Boo Boo’ since I was 15, 16 years old. We came up the amateur ranks together. His father [Paul Andrade] is like an uncle to me. This is way more personal than anything. But we also love the sport of boxing, and we also wanna do it for the sport of boxing. So we have plans on facing each other, but hopefully in the future, not the near future.”

Hearn has said Andrade will return to the ring at some point in January or February for an optional title defense, perhaps in his hometown of Providence, Rhode Island. A fight against an opponent of Jacobs’ caliber will have to wait, according to Hearn, until Andrade gets back into a rhythm following one year off before he defeated Kautondokwa last weekend.

Brooklyn’s Jacobs and Hearn want him to take advantage of the most profitable option available – another middleweight title unification fight against Canelo Alvarez – on May 4 in Las Vegas. Mexico’s Alvarez (50-1-2, 34 KOs) first must defeat England’s Rocky Fielding (27-1, 15 KOs) in their 12-round, 168-pound championship match December 15 at Madison Square Garden.

Meanwhile, Jacobs expressed his appreciation for Andrade’s assistance during their training camp in San Carlos, California.

“We were in camp,” Jacobs said. “We were working with Demetrius Andrade. We were sparring partners. He was giving me little tricks, how to work the southpaw jab, keep my distance. So much respect, cheers to ‘Boo Boo’ on his championship and just being my brother and being there for me in camp. We was helping out each other. I couldn’t ask for better assistance.”

[QUOTE=Rip Chudd;19240131]Smh not surprised you brought up gay stuff. It was obvious I was talking to an effiminate fool from your first response :lol1:[/QUOTE] So it was true. You really get a rise out of seeing two friends beating each…

[QUOTE=JcLazyX210;19239984]Thank you, because you are not a pro athlete in any sport and your opinion is just your opinion. Nothing less nothing more. Anybody comparing a blood sport to basketball is crazy. Who actually wants to fight their best friend…

[QUOTE=Rip Chudd;19234889]One of these dudes need to move out of the division then. If you're not actual brothers or family then the fight should happen. What the heck has happened with boxing nowadays?[/QUOTE] they grew up together in the amatuers.…

[QUOTE=umop-ap!sdn;19235041]Some of you may not understand this as it is definitely a cultural thing. In the black communities we are raised with a real family vibe and any close friend you have, you call their Mom and Dad 'Uncle and…