Jacobs: Other Than Mayweather, I'm Canelo's Only 'Prime' Foe

Saul 'Canelo' Alvarez has his sights trained on taking a significant step towards a place in the history books as he prepares to take on Daniel Jacobs in Las Vegas this weekend.

Canelo will put his WBA and WBC middleweight belts on the line against IBF strap-holder Jacobs (35-2) at T-Mobile Arena on Saturday.

Only Demetrius Andrade, the WBO champion, would stand between the winner and unification of the middleweight division and Canelo – whose sole defeat from 54 professional fights came at the hands of Floyd Mayweather Jr six years ago – is fully aware of the magnitude of the bout. 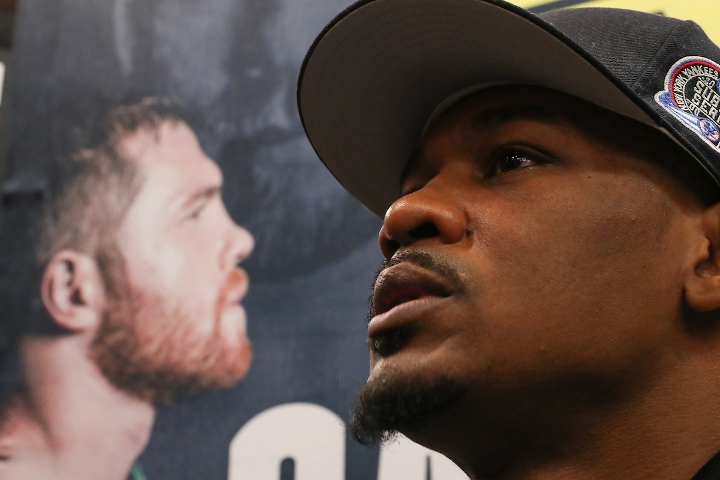 Jacobs has plans of his own - and views Canelo as the perfect opponent to reach boxing immortality with a career defining win.

Jacobs is not impressed with Canelo's record of wins. He believes the Mexican superstar has beaten many opponents who were overmatched or past their best - and he also feels Canelo had a decisions that should have gone the other way.

“I just feel as if the thirst for this fight is at an all-time high. We are only three days away from a mega fight and it’s such a privilege to be here right before this mega showdown. This is the opportunity of a lifetime for me and I’m mostly excited to get in there to show the world that I am the best middleweight of my generation. I finally have an opportunity to prove it, to go against Canelo Alvarez. You guys are going to see fireworks, masterful boxing, skills, dedication, persistence, and grit, most importantly," Jacobs said.

“I’m gonna talk inside the ring and let my fighting speak for itself. To Canelo – let’s put on a good show my brother. I think mentally, Golovkin started out as the most devastating power puncher and boogeyman of the division. So mentally, he was tougher. Physically, this is much harder preparation because Canelo is very agile, he’s very fast, his offensive onslaught is at an all-time high. It’s a drastic difference. I thought I won the GGG fight and I assure you I will win this fight without controversy.

“What will take the win will simply be me being the best version of myself. My physical advantages in itself can win me the fight, but I also have the mental capacity. I’m in my prime. I’m the only fighter Canelo has faced since Floyd Mayweather to be in his prime. I’m super confident and I’m going in there with the ability as well.”

[QUOTE=Realizniguhnit;19708031]Diff subject but Jordan was still prime until he was on his 3rd ring but we got to stop acting like he didn't have a all star supporting cast. If he didn't he wouldn't have won much past those 2-3…

Lara was in his prime so was Austin "No Doubt" Trout

[QUOTE=Sledgeweather17;19708583]So then, by your logic, GGG, who fought nothing but bums his entire career and therefore had no wear and tear, must have been prime when he fought Jacobs and Canelo, right?[/QUOTE] GGG is a special case, because of his…

[QUOTE=killakali;19709058]a past his prime trout gave the Charlos all they could h see and then some[/QUOTE] The jury is still out on the Charlo brothers.