Daniel Jacobs wants Canelo Alvarez, Jermell Charlo or a rematch with Gennady Golovkin regardless of the network after Saturday’s split-decision over Sergiy Derevyanchenko earned the IBF’s vacant 160-pound title at New York’s Madison Square Garden, according to his manager, Keith Connolly.

But whatever move Jacobs makes, his decision will involve powerful advisor, Al Haymon, the bulk of whom’s massive roster of fighters are mostly adhering to the three and four-year deals with Showtime and FOX.

“Danny and I never make a decision without us talking it over with Al and checking on his insight. Al doesn’t do anything without me knowing about it and I don’t do anything without Al knowing about it. We always do what’s best for Danny as a team. Al and I usually agree on things 99.9 percent of the time. We never make any major decisions without both of us agreeing on it.” 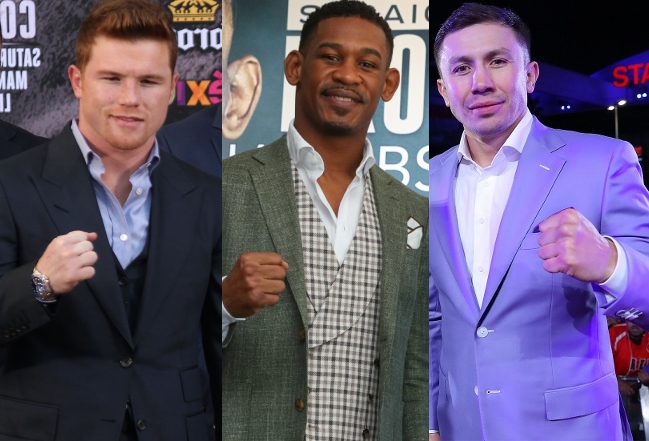 In returning to The Garden, site of his unanimous decision loss to the then-unbeaten Golovkin (38-1-1, 34 KOs) in March 2017, the 31-year-old Jacobs (35-2, 29 KOs) earned his third-straight victory over the 32-year-old Derevyanchenko (12-1, 10 KOs), ending his Russian-born Ukrainian stablemate’s run of six consecutive knockouts.

Jacobs is considering the 28-year-old Alvarez (50-1-1, 34 KOs), who will pursue a third title in as many divisions on December 15 against WBA "regular" 168-pound title holder Rocky Fielding after dethroning Golovkin as WBA/WBC champion by majority decision in a September rematch of their draw in September 2017.

Earlier this month, Alvarez signed a $365 million multi-fight deal with the streaming service DAZN, whose lead promoter is Eddie Hearn of Britain-based Matchroom.

“We’ll also sit down with Eddie Hearn,” said Connolly of Hearn, who began working with Jacobs in September 2017. “He’s done a tremendous job of promoting Danny over the last year.  At this point in time, Danny’s in a can’t-lose situation with the greatest team in the sport.”

Another option is two-division and interim WBC 160-pound champion Charlo (27-0, 21 KOs), a 28-year-old who will pursue his initial defense and fourth straight stoppage victory against two-time title challenger Willie Monroe (23-3, 6 KOs) at Barclays Center in Brooklyn, New York, on December 22.

“Danny’s at the point in his career where he has options to fight anywhere and isn’t forced to one network. If he wants to fight Canelo, obviously, he’s gonna fight on DAZN. If he wants to fight Jermall Charlo, he’s going to fight on Showtime or Fox. If he wants the Triple-G rematch, we might have to do that on a channel where Triple-G winds up, but, now, we don’t have to chase Triple-G. Now, Triple-G can come to us. If HBO came to Danny and wants to do a rematch with Triple-G, and they offer the right amount of money, maybe we would fight on HBO again,” said Connolly of Golovkin, whose 23-fight, nine-year stoppage streak ended against Jacobs.

“If the Canelo money isn’t right, we’ll definitely look to Charlo, and Danny would be more than willing to fight Charlo. If Jermall Charlo wants the fight, Danny definitely wants that. At this point, it’s about making the best specific deal for Danny, because he’s probably got maybe four years left of these prime fights where he’s young enough to win them. We want to fight Canelo, but only if the money is right.

"Or, maybe we fight Jermall Charlo. Danny wants to shut Jermall Charlo’s mouth, and if he wants to do that, we’ll do that on Fox or Showtime. It’s a fight where Danny would be the A-side, money-wise, and I think it would sell out the Barclays Center. We’d take that fight immediately, and we would be talking about the first quarter of next year. Danny wants to make the most money that he can make and the best possible deal at this point in time.”

“At the end of the day, Al and I always have the same equation with all of these fighters,” said Connolly. “We give them the best advice that we can, and, ultimately, we always allow them to do what they think is in the best interest of their careers.”

[QUOTE=bigdunny1;19235495]No network has invested more money into boxing right now then DAZN. You don't spend the money they spending and hand out the biggest contract in sports history to the biggest fighter in the world and then start counting pennies.…

[QUOTE=Verus;19234737]Right, December it is. I think Canelo is eager to fight Danny Jacobs. I don't understand why Danny is not a bigger draw. He is a good fighter and has a compelling story. Right now both Canelo and Jacobs are…

[QUOTE=bigdunny1;19234884][B]Don't put words in his mouth that's not what he said.[/B] Had he said we are not taking less money we will fight WHOEVER brings the most money to table nobody would have a problem. Instead what he actually said…