Jacobs: I Took Everything GGG Had, Canelo is Not as Strong!

IBF middleweight champion Daniel Jacobs is confident that he will own two more world titles on Saturday.

The contest will be carried by DAZN, in what is by far the streaming outlet's biggest event. 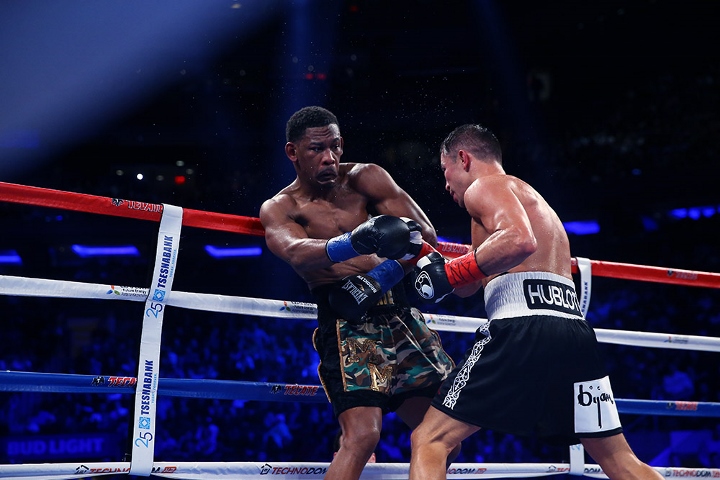 Jacobs lost a close twelve round decision to Gennady Golovkin in 2017 - which the Brooklyn boxer strongly disagrees with and believes he was robbed of a victory.

Canelo went to a controversial twelve round draw with Golovkin in the same year, but defeated him in their 2018 rematch, with a razor close split decision over twelve rounds.

Jacobs is not concerned with Canelo's punching power. He believes the Mexican star is in no way a bigger puncher than Golovkin.

"People said GGG hit too hard and I took everything he had and there's no way that Canelo hits that hard. He's a smaller middleweight than me and I may have to adjust to his size and speed in the early going, but even though he holds most of the belts and it's largely his titles we're fighting for, I already see myself as the best middleweight out there and the whole world will agree with me after I've defeated Canelo," Jacobs said to Sky Sports.

"One hundred percent I'm the best middleweight out there right now. I went in there with Golovkin, the monster who no one wanted to face, and most would agree that I was the one who boxed better throughout and that my hand should've been raised. Golovkin has then gone on to defeat Canelo twice in my opinion, and although the official results say otherwise, I take a lot from my fight with Golovkin, and Golovkin's fights with Canelo to believe that I'm the best middleweight there is right now. May 4th in Vegas is when you see me make it official."

[QUOTE=j.razor;19706612]Jacobs said in a interview that he is happy with the judges & Ref. so no excuses.[/QUOTE] In game of thrones.. Ned Stark was happy with lord Janos and the city watch too.. see what happened to him an his…

[QUOTE=j.razor;19706586]This app streaming is wack..[/QUOTE] Maybe to you but for ten bucks a month it's definitely worth it!

[QUOTE=5000boxing;19703788]I'm going with jacobs on this one.. but most likely the judges have already filled out their scorecards in favor of Canelo.[/QUOTE] Jacobs said in a interview that he is happy with the judges & Ref. so no excuses.

[QUOTE=j.razor;19706574]Yeah I'm with you & a couple of us can't watch it cuz we don't have a "smart television" & we for damn sure aint watching it on a little ass phone..lol..so we have to go to another friends house…

[QUOTE=BigStomps;19703701]You keep proving everyday how much of an idiot you really are! I've never heard anyone say "it's a shame this fight isn't on ppv"........ You act like you got money to pay for it anyway,... Lol Talking about no…