Perhaps the most compelling, competitive boxing match HBO broadcast live on the network this year drew lower ratings than most of its less entertaining fights this year.

According to Nielsen Media Research ratings released Tuesday, the main event of HBO’s three-bout broadcast Saturday night, Daniel Jacobs’ split-decision victory over Sergiy Derevyanchenko, drew a peak audience of 553,000 viewers. An average audience of 500,000 watched the 12-round battle between Jacobs and Derevyanchenko, the headline of the third-to-last telecast of HBO’s 45-year run in boxing.

Jacobs (35-2, 29 KOs) knocked down Derevyanchenko (12-1, 10 KOs), a frequent sparring partner, with a right hand late in the first round of their fight for the vacant IBF middleweight title. Derevyanchenko recovered immediately, though, and thoroughly tested Jacobs throughout an action-packed, back-and-forth fight contested at a very high skill level in The Theater at Madison Square Garden. 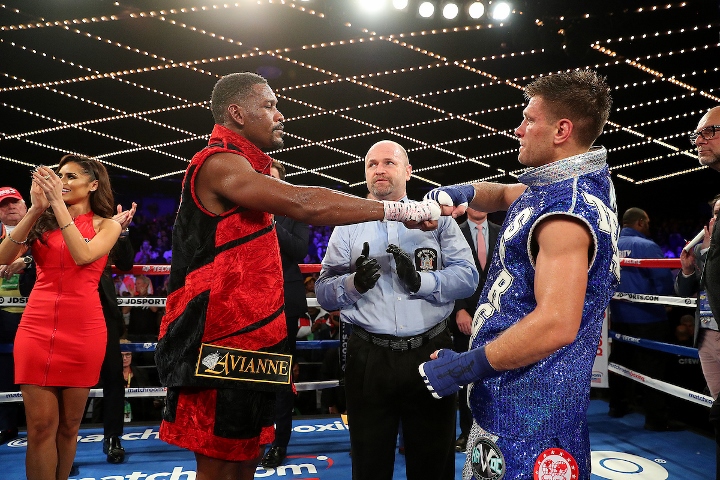 Jacobs defeated Derevyanchenko by the same score, 115-112, on the cards of judges Tom Schreck and Steve Weisfeld. Judge Julie Lederman scored their fight 114-113 for Derevyanchenko, a decorated amateur who fought for the first time on HBO.

The ratings were significantly lower for Jacobs-Derevyanchenko than for Jacobs’ previous appearance on HBO. That bout – Jacobs’ 12-round, unanimous-decision win against Poland’s Maciej Sulecki on April 28, peaked at 874,000 viewers and averaged 811,000.

The opener of HBO’s “World Championship Boxing” tripleheader, Heather Hardy’s victory over Shelly Vincent, attracted a peak viewership of 527,000. The 10-round Hardy-Vincent rematch, which kicked off a 10 p.m. ET telecast, also was watched by an average of 442,000 viewers.

Hardy’s victory Saturday night earned her the WBO women’s featherweight title, which was vacant before their rematch.

Interestingly, HBO got plenty of bang for its buck out of the Hardy-Vincent rematch, just the second women’s bout the network has aired. The network’s contribution toward their purses was just $10,000.

Meanwhile, the network committed nearly $3 million to pay the purses of Jacobs and Derevyanchenko, which drew only a marginally higher peak rating.

Not every home has HBO subscription doe. You can't really compare it with basic cable like Fox.

Lmao no one wants to watch Jacobs. Even Charlo-Korobov peaked at 2.4 million almost 4 times as many as Jacobs-Derevy

Charlo-Jacobs on DAZN will be worth a sign up

Looks like GGG is going to be joining DAZN...