The two will meet at 175 lbs with Canelo moving up two weight divisions to battle Kovalev for his light heavyweight title inside the MGM Grand Arena on DAZN this November 2nd.

Jackson knows why Kovalev was chosen to be for the Mexican superstar.

“They saw his last fights," Jackson told BoxingScene.com. “They picked Kovalev 'cause he’s the weakest out of all of them in the light heavyweight division. If Kovalev beats him, he can go back down and say he was too big.” 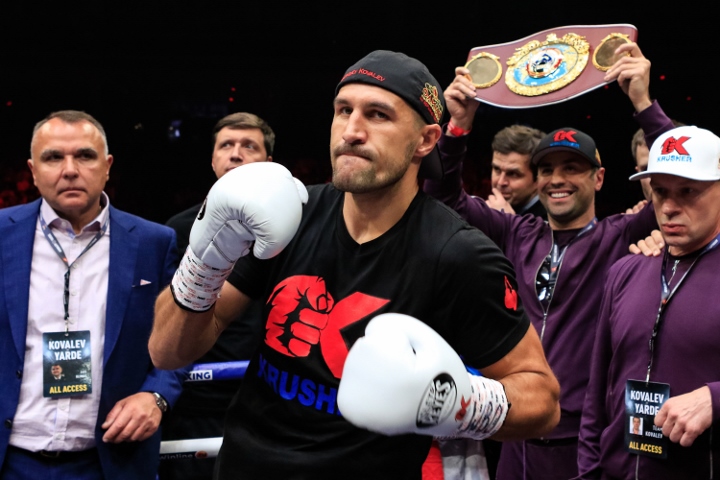 While Kovalev ruled the light heavyweight division for years past, it was a his lifestyle outside the ring that was a bigger issue when it came to remaining on top of the division and why Jackson says he’s the lesser of the four champions now.

“They’re style of living outside of boxing, it's not the way he lives,” stated Jackson. The other 3 champions don’t destroy their body so they're fresh and kind of young compared to him. He was stubborn also when I tried to teach him how to fight on the inside. Now he can’t deal with fighters when they go to the body.”

“Beterbiev, Bivol, and Gvozdyk, they are little better than he is. I’m not saying Kovalev can’t beat them because he can punch. At this stage of his career he’s on the decline compared to them.”

“I don’t think it’s a cherry pick but they do see something there and that’s why they chose him, it’s a calculated risk,” explained Jackson. "Kovalev is declining and this the best time to get him. 2 or 3 years ago you leave that guy alone”

But it all reverts to Kovalev’s lifestyle to Jackson as to why he feels Kovalev may be done with boxing after this fight.

“What’s going on with him outside of boxing whether it’s the drinking or sentimental things it's put him at a disadvantage. But there’s a reason why they picked him out and not the other 175-pounds guys. Kovalev is looking for the cash out and if he loses maybe he's through with boxing.”

[QUOTE=Senor_frogs;20066370]Older slowing Champion? Are you serious? Wasn’t he ranked #1 on mostly everyones P4P list? Lol. He is picking kova because he’s the easiest. Now he’s moving up 2 weight classes. When have you ever seen a guy move up…

Oh, these public displays of bltchery.....We have Ward to blame :lol1:

Jackson needs to get over himself and start training proper male fighters. All the unsubstantiated bull-sh-i-t rumors of Kovalev's lifestyle. What do they know how he leads his life in Chelyabinsk and Russia and everywhere else? All they go by…

[QUOTE=MASTER OF you;20065265]he loses to all three. remember this is current kovalev he's a six round fighter who's stamina disappears midway through a fight. I think kovalev has a better chance at beating beterbiev than the other two. beterbiev can…