Jackson: Jacobs Was a Cruiserweight, Had an 'Unfair Advantage'

John David Jackson, Arias’ trainer, took exception following Jacobs’ unanimous-decision victory Saturday night to what he called an “unfair advantage” for the former WBA middleweight champion. Jackson claimed Jacobs was a cruiserweight when he entered the ring for their 12-round fight at Nassau Veterans Memorial Coliseum, at least 10 pounds heavier than Arias.

According to Jackson, Jacobs weighed “180, 185 pounds,” whereas Arias was 170 pounds when their bout began. Jacobs weighed in at 159.6 pounds Friday, slightly lighter than Arias (160). 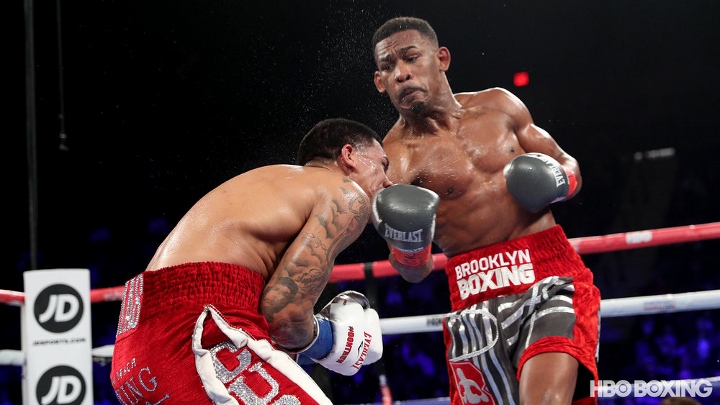 The 6-feet Jacobs’ weight on fight night previously caused controversy before and after his close loss to Gennady Golovkin on March 18 at Madison Square Garden. Jacobs skipped the IBF’s second-day weigh-in the morning of that bout, which gave Golovkin’s handlers reason to speculate that he was significantly heavier than Golovkin in the ring.

“I wasn’t worried so much about Daniel,” Jackson said during a post-fight press conference early Sunday morning. “Good fighter, very good fighter. I was concerned with the weight. And here’s the problem with boxing today – you’ve got all these sanctioning bodies, you know, they want all this money from these guys, but they don’t stick by the rules. And here’s why I’m saying that, and even the commission, I don’t care if they get mad or not. Here’s the problem – Danny weighed 159.6 yesterday. But he wouldn’t step on the scale today. Why? Because if you look at him, he’s about a cruiserweight and he’s a big boy.

“He won the fight. I’ve gotta give him that. But he was the bigger man. It wasn’t a fair fight. Now when I was champion, we weighed in the same day. We didn’t get the next day to rehydrate and as a junior middleweight become a super middleweight or a light heavyweight. We stayed within our limit. We didn’t get an advantage. So if you can make the weight one day, but you can’t the second day, then you broke the rules. Why wouldn’t you weigh in the second day? Because you knew it was to your advantage to rehydrate to about 180, 185. That’s a cruiserweight. He looked bigger than Luis. He didn’t hit him with is best shot, but he hit him with a couple shots and didn’t even move him.”

The 30-year-old Jacobs (33-2, 29 KOs) didn’t break any New York State Athletic Commission rules by weighing whatever he weighed. There wasn’t a sanctioning body involved, either, because Jacobs-Arias was a non-title fight.

Jackson referred to the fact that Jacobs wouldn’t step on HBO’s scale on fight night. Andre Rozier, Jacobs’ trainer, said he has “no idea” why Jacobs wouldn’t allow HBO to weigh him, but that he weighed Jacobs on Saturday and he was 171 pounds.

“They wouldn’t step on the scale,” Jackson said. “That’s what I’m saying. He won the fight, but guess what, he had an unfair advantage. He was bigger, and he knew that. And he used it to his advantage, and he won the fight. And I can’t take nothing away from him. But I will take the fact that you weren’t even a super middleweight. You weren’t even a light heavyweight. You were a cruiserweight, and I guarantee you were in that range. And when you’re fighting someone and he’s about 170 the most, it shows. And you’re the bigger guy, you can take his punch and you can walk him down. You can do things you that you’ve never done in other fights.”

Arias (18-1, 9 KOs) made reference to Jacobs’ size advantage several times during the press conference, but it bothered his trainer even more.

Jackson thinks fighters should weigh in on the same day they fight, the way they did when he owned the WBA middleweight title and the WBO super welterweight championship in the 1990s. They should at least, according to Jackson, be required to participate in second-day weigh-ins so that they can’t add too much weight between the time they weigh in and the time their fights start.

“The sanctioning bodies and the commissions, they shouldn’t allow it,” Jackson said. “They’ve gotta step up. They say they’re for the betterment of the fighters and their health, but where were they? Listen, I don’t care who the fighter is. You’re not that much bigger than boxing. These commissions and these sanctioning bodies step up for the money. They take it out of the fighters’ purses and they get their cut. But they don’t step up for their well-being.

“If they did, they’d have done it for this fight here and every other fight. And they should get off their butts and start doing it for everybody. That’s how these guys get hurt. When I was fighting, that’s what we did. We weighed in on the same day. We used to weigh in at 12 noon and fight at 8 o’clock that night. You couldn’t put on 20, 30 pounds. They do that now, and these commissions and these sanctioning bodies, they say nothing. As long as they get their money, they look the other way. That hurts the fighters.”

[QUOTE=aboutfkntime;18207316]rubbish !! the total amount of functional muscle-mass and conditioning that you can take into a fight is determined at the official weigh-in, NOT 1 day later..... excess rehydration, can even be detrimental you guys crying about a couple of…

you Golovkin fans are mugs LMAO for goodness sake, you clowns got played by the oldest trick in the book put him in there with cabbies and flat-footed bums..... keep him away from movers/spoilers..... and tell everyone that he is…

[QUOTE=whoseyourdaddy;18207810]I hope you’re not trying to compare Jacobs weight with Canelo’s weight vs GGG? according to ESPN Deportes Canelo weight The nigh of the fight 173.9 compared to the unknown (“190”) Lbs Jacobs is suspected to weigh come fight night.…

Boo ****ing hoo. Weight don't win fights. Fighters win fights. And your boy is just ass bruh. And you sound like a ***** making excuses. Would these same weak Ass excuses come out if you won? Hell no so stfu…

[QUOTE=turnedup;18205665]While I know he's probably saying this because he's at the tail end of a loss over it. In any other situation its hard to argue against his point here. Weight melting should not be a skill required for boxing…