Newly crowned EU middleweight champ Jack Culcay impressed in stopping Adasat Rodriguez this past weekend and tells BILD that he has his eyes set on the the WBA, IBO, WBC, middleweight champion, Gennady Golovkin - but not until next year.

Culcay, a former WBA champ at 154,  feels stronger at middleweight and more powerful.

"El Toro" Rodriguez is normally quite durable and not an easy man to stop.
...

Swedish heavyweight Otto Wallin, 20-0, has relinquished the EU title he won in April with a win over Adrian Granat. Wallin is now longer under contract with Team Sauerland.

What is next? Well, some rumors point towards the US. Wallin is trained by Joey Gamache and is a well schooled, smart southpaw. The minus might be a lack of size and punching power.

Official challenger is Robert Helenius and he will face the highest ranked suitable contender. 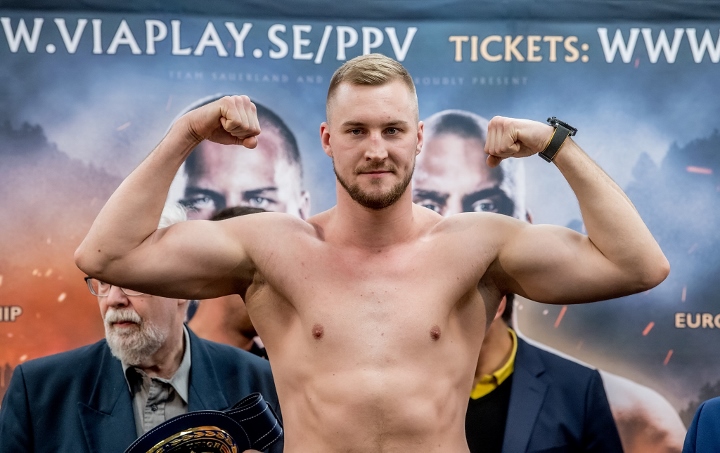 Maravilla Box promotes a big Spanish/Armenian/Nordic show June 29. The mainevents for the Armenian fans is a lightweight between Vage Sarukhanyan, 17-2-1, and tough veteran Natxo Mendoza, 43-12-3, and Narek Abgaryan, 8-0 vs Jesus Galicia, 17-10-1, - in both fights the WBC Int´l title is at stake.

The Spanish fans get an all Spanish matchup between female bantamweights Eva Naranjo, 11-0,  and Davinia Perez, 6-1, also with the WBC Int´l belt on the line.

The Nordic fans get a light heavyweight crossroads fight between Tim-Robin Lihaug, 17-4 and Finland´s Janne Forsman, 22-9.

USArmenia and Viasat televise the event.
...

TS Fight Sportmanagement stage a quantity wise big show on Saturday (June 16) in Karlsruhe - there is as it looks now around 20 fights on the card. Former WBA cruiser king Firat Arslan, age 47, takes on Pascal Ndomba.

Female veteran Layla McCarter is in against Ruth Chisale and Rafael Chiruta,  15-19-1, the journeyman that became a champion, defends the GBU 154 lb title against Antonio Hoffmann, 18-1. Their respective records speak loud but Chiruta is a dangerous, wild puncher.

Colorful Swedish heavy "King" Aldo Colliander, 16-2, stopped Russian Yaroslav Ryakhovsky on a third round TKO tonight (June 12) in Belgorod. Colliander started slowly but got going in the second and Ryakhovsky didn´t come out for the third.

Colliander is also politically active and and have a busy summer coming up with elections in September.

Lost to both Sulecki & Andrade @ 154 yet he wants the toughest @ 160? Sure... Jack you've gotta climb that hill to get a shot at the MW crown, Triple G's got a long line of Jills before you…

Slow your roll Jack! In the meantime, take a number.

Culcay gets eaten up by Golovkin, he needs to beat a legit Euro level guy at 160 next. Fight Britsch, Mittag or Doberstein. Interesting that Wallin is leaving Sauerland and dropping the EU belt, would make sense for Hearn to…