A night designed to establish the next steps in the career of Yves Ulysse Jr. instead became a resurrection in the fledging career of Ismael Barroso.

Nonstop aggression paved the way for Venezuela’s Barrosso to pull off a considerable upset in soundly outpotnting Canada’s Ulysse Jr. over 12 rounds Thursday evening at The OC Hangar in Costa Mesa, California.

Scores were 115-113 twice and 117-111 in favor of Barroso, who was just 2-3 in his previous five starts but turned back the clock in offering a relentless workrate over 12 rounds. 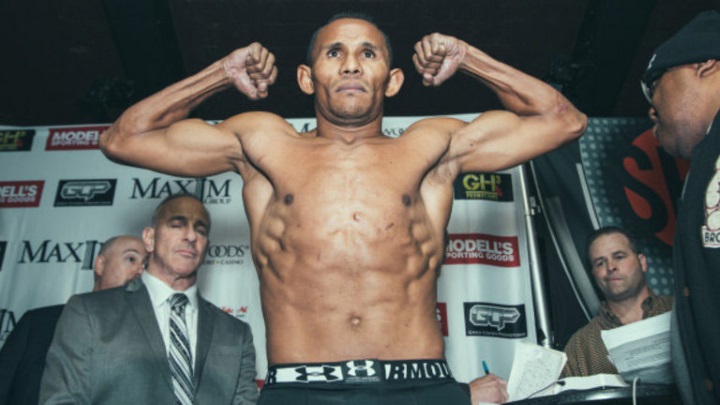 Action was sparse in the early rounds, as Ulysse offered constant movement without presenting much of an offensive attack. Barroso was the far busier of the two, although not landing much of consequence—or really anything at all as he was hovering at a 10% connect clip through the first two rounds.

Barroso closed the gap in round three, constantly moving forward and coming behind a flicking jab with straight left hands. The offense-minded Venezuelan southpaw—who now lives and trains in Miami, Florida—considerably outworked Ulysse Jr. through three rounds, though he would slowly begin to pay a price for his level of bravery.

Ulysse Jr. came on in round four, walking straight down the middle and timing Barroso’s side to side movement with right hands upstairs. Even when the offense wasn’t flowing, the rising Canadian contender played smart defense, although it never discouraged Barroso from continuing to outwork him, which played far better with the judges.

Round six saw Ulysse Jr. fight behind a high guard, wading through Barroso’s swarming attack and countering with left hooks on the occasions he remembered to throw punches. The streaking junior welterweight wasn’t nearly active enough to entice the crowd nor impress his corner, although Ulysse Jr. changed that with a right hand late.

A rare sequence where Ulysse Jr. finally let his hands go nearly caused controversy in round eight. The boxers became entangled in center ring, prompting referee Ray Corona to call time. The command went unrecognized by Ulysse Jr., who connected with a left hand to the midsection of Barroso which prompted a brief timeout and a warning from the third man.

Barroso resumed control in round nine, continuing to outwork Ulysse Jr. and not showing signs of slowing down. It spilled over into round 10, although Ulysse Jr. was able to land his best right hands of the night in a frame otherwise highlighted by his opponent’s aggression.

Despite Barroso outworking his opponent in nearly every round, the marching orders handed down by his corner were to continue as if he were losing the fight. The 36-year old Venezuelan responded in kind, forcing Ulysse Jr. and connecting with a right, straight left and another right hand which froze his opponent in his tracks. Ulysse Jr. scored with a right hand late in the frame, though not enough to even qualify as a shoeshine.

Both boxers offered a 30-second drill in the 12th and final round, thought it was far too little, too late as Barroso wrapped up the unlikely upset as he improves to 22-3-2 (20KOs). It’s easily the biggest win of his career since his interim title win over Kevin Mitchell four years ago almost to the day.

Ulysse Jr. snaps a four-fight win streak as his record falls to 18-2 (9KOs). A 10-round decision over countryman Steve Claggett had him on the right track to challenge for a title in 2020, although it’s back to the drawing board for the 31-year old.

The bout streamed live on DAZN.

[QUOTE=Mammoth;20232423]Kinda surprised by this[/QUOTE] im really surprised by this. wow. was really rootin for ulysse but fell asleep. impressed by barroso, tho. thought he was done. ****in a there goes ulysses GB contract.

Barroso won easily . For me it won 8 , or 9 rounds . Thanks god he wasn’t robbed ... Congratulations barroso .

Ulysse should find another line of work.

[QUOTE=Mammoth;20232423]Kinda surprised by this[/QUOTE] I'm not. Canucks always seem to be dissapointing as they step up. Let's see what happens to David Lemieux this weekend in his untelevised SMW tuneup fight vs some old eastern euro guy who looks like…

Kinda surprised by this