It wouldn’t be fair to say Ishe Smith was content in his retirement from boxing following a February loss to Erickson Lubin, but the former junior middleweight world champion had moved on and was doing all the things necessary to avoid making a comeback.

“I hadn’t even gone to any fights,” said Smith. “I haven’t been to a fight or really even paid attention to boxing since I fought because I didn’t want to have that itch.”

Smith has been around the game too long to know that the only way to avoid a return was to cut off all contact with the sport. That’s not easy, especially for a fighter who, at 41, still may have some gas left in the tank.

Yes, he left the sport after three consecutive defeats, but before his stoppage loss to Lubin, Smith dropped competitive decisions to a pair of fighters who went on to become world champions in Julian Williams and Tony Harrison, and you’ll find more than a few people who believe he did enough to beat Harrison.

Yet you always like to see a fighter leave on his own terms, and that’s what Smith did.

But soon, his buddy Paulie Malignaggi got involved in the world of bare-knuckle fighting and had a high-profile bout with UFC veteran Artem Lobov in June. Then 40-year-old Manny Pacquiao had one of his best performances in years when he beat Keith Thurman in July. Around this time, Smith got contacted about a new bare-knuckle boxing promotion – Valor Bare Knuckle – led by MMA legend Ken Shamrock.

Some would call that the perfect storm.

“After Paulie fought, I didn’t really think much of it,” said Smith of making the move to the land of no gloves. “Then Manny fought and I saw how good he looked, and I started thinking about my last performance. I started questioning whether I could go out there and fight again. If he (Pacquiao) loses that fight, I’m not having this conversation with you right now. If he looked terrible, I’m not doing bare-knuckle or anything.”

But here he is, in a whole new world, starting over at 41. Needless to say, he got an expected response from his kids.

“They were like, ‘Really? You’re crazy. What are you doing?’” Smith recalls. “I can’t say they were receptive at first, but after sitting down and talking to them and telling them I still had the hunger to fight, they just wanted to make sure I’m healthy.”

Smith is healthy and as one of the sharpest minds in the game, he should have a future as an advisor to the next generation of boxers. But in the present, the Las Vegan is still a fighter. It didn’t leave his system in February, and it’s not going to leave his system anytime soon, especially if he’s successful next month.

That’s a big “if,” as we all saw Malignaggi’s debut in bare-knuckle boxing result in a loss to Lobov. But Smith has been picking Malignaggi’s brain for tips and insight, and also consulting the likes of renowned cutman Jacob “Stitch” Duran to know just what he’s getting into.

“Whenever I do something, I don’t ever want to get talked into doing something because I need money or I need certain things,” Smith said. “Whether it’s boxing, MMA or bare-knuckle, I want to make sure that I get all the information I need so I can be successful.”

Did he just say MMA?

“I’m crazy, man, so maybe MMA after that,” he laughs. “I just got that itch again, so I want to come out of this successful, then maybe MMA, maybe another boxing match, I don’t know. I hate being stuck on 29 (wins), though. That really bothers me. So I definitely want to go out and get another win (in boxing).” 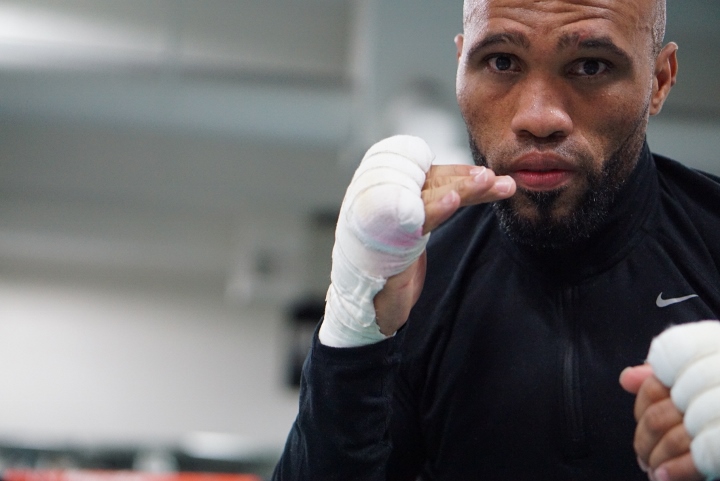 It does beg the question, with a nice break from the Lubin fight and the fire to come back being lit, why not traditional boxing, especially since he has the name and reputation to at least get one more enticing opportunity?

“If I go and box right now, let’s be real, I’m gonna be on the B-side,” he said. “And I haven’t been the luckiest guy on the B-side. I’ve got 11 losses, but if you look at those losses, a lot of those guys are either contenders, they fought for belts or they became champions, and a lot of those losses are debatable. So when I think about that, do I want to put myself through a rigorous training camp, come back, wind up on the B-side – and I haven’t been the luckiest with decisions anyway – and be in a position where I need a knockout?”

He makes a good point, but he’s never been known for his power, and now he’s going into a realm where having a one-hitter-quitter in your arsenal gives someone quite an edge when the bell rings. But Smith sounds genuinely excited about this new endeavor, and if he’s being told that he has to worry even more about his hands or getting cut, that’s not a concern at this point.

But if that fight night is successful, Smith may have started a second chapter, one he already has a name for.

“The time is right for me to try something new,” he said. “This is not gonna be close to some of the paydays I’ve experienced in boxing. But it’s me wanting to try something new, me wanting to go through a rigorous training camp and see where I’m at and potentially get back into the ring one day. I don’t want to end my legacy and career with the Lubin fight. I want to see what I have left. Why can’t I rewrite or have a better history and a better ending than what I have? So there’s no better way to start my next chapter than with this. I call this the Manny chapter. Then I can explore all those other boxing options after this.”