Ioka: Tattoos Have Nothing To Do With Boxing, I Hope To Chip Away At JBC Rule

Kazuto Ioka figured he would have to face the music at some point.

Controversy has swirled from the four-division and reigning WBO junior bantamweight titlist’s 8th round knockout win over Kosei Tanaka this past New Year’s Eve in Tokyo. The part that’s make the news has nothing to do with the fight itself, however; rather Ioka’s violation of existing and antiquated rules with the Japanese Boxing Commission (JBC).

A panel discussion is taking place over the form of discipline to dole out over Ioka fighting with visible tattoos, which is frowned upon as it relates to boxing in Japan. The JBC rules state that national boxers with “a tattoo or other markings that makes the audience feel uncomfortable" shall not be permitted to compete in a boxing event.

“For me in boxing, the commission asks me to [conceal] it before I enter the ring,” Ioka previously explained in a YouTube video last October. “But it really makes no sense and it has nothing to do with boxing, so I hope to chip away at this rule.” 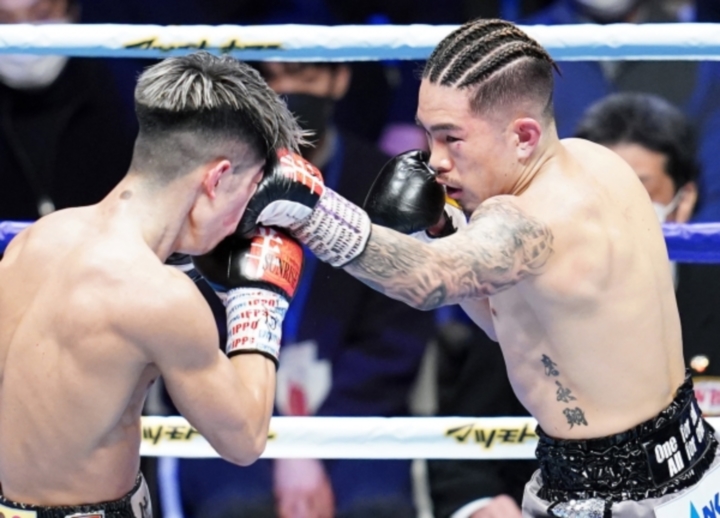 The outdated rule does not extend to fighters outside of Japan, or even those who relocated to Japan from elsewhere (such as Venezuela’s former three-division titlist Jorge Linares, who lives in Tokyo). It also exists from a time when tattooing was illegal in the country. A ruling handed down last June by the Supreme Court of Japan deemed that it was no longer a crime to tattoo without a medical license, rejecting an appeal from Japan’s State’s Attorney’s office and throwing the case out of court, according to national published reports.

Boxing has yet to catch up in this regard, with the latest commission probe overshadowing an otherwise remarkable feat in the ring.

“People who are watching boxing are focused on the action in the ring, not the tattoos they [sport],” notes Ioka. “Then there are international boxers who reside in Japan and fight for gyms here that have tattoos and they are allowed to fight without having to [conceal] because they are foreigners.

“So, it is an awkward as well and inconsistent rule. If they are going to ban it, then they should ban it for all fighters , Japanese and foreigners.”

Ioka (26-2, 15KOs) decided to get a tattoo shortly following his return to the sport in 2018 after abruptly retiring the year before. The 31-year old Osaka native entered the ring on New Year’s Eve with ink across his lower left abdomen and a full sleeve on his left arm.

“I decided to get it to symbolize that I was going to do something that I could not turn back on,” explains Iota, who has fought three times in Japan since his return, which preceded his U.S. debut and a fight in Macao. “If I decided to return, I can’t run away from that decision. In addition, it was to symbolize my feeling towards my family which was dedication that it was forever and never regret.”

Ioka notes that he applied concealer in an attempt to reduce visibility to his ink, but that the application wore off by the time he entered the ring. To his point, less attention was paid to his markings than the spectacular performance in the ring. Ioka—Japan’s only-ever male boxer to win titles in four weight divisions—denied his countryman that same honor, dropping Tanaka—a previously unbeaten three-division titlist prior to fight night—twice before stopping him in the 8th round of their highly entertaining title fight.

Whatever fate the JBC has in store shouldn’t prove consequential to the rest of his career. According to our friends at AsianBoxing.info, expectations are for Ioka to receive a “Strict Caution”, although the most severe punishment would be an indefinite license suspension.

Either way, there stands a greater chance of the four-division titlist bringing back his act to North America. In his sights are unification bouts with lineal king and WBC titlist Juan Francisco Estrada (41-3, 28KOs), four-division and reigning WBA titlist Roman ‘Chcocolatito’ Gonzalez (50-2, 41KOs), and Philippines’ Jerwin Ancajas (32-1-2, 22KOs) whose last five defenses of his IBF belt have taken place in the U.S. or Mexico.

“When I returned, I intended to fight [extensively] in America,” said Ioka, who scored a 10-round win over McWilliams Arroyo in their Sept. 2018 bout in Carson, California before returning to Asia for his past four bouts. “I didn’t intend to return to Japan and fight. But, if the commission says I can’t fight here because of the tattoo, then I will only fight internationally.”

That’s not to say that the history-making titlist will turn his back on his nation altogether. Ioka will proudly fly Japan’s flag no matter where he fights.

At some point, though, it is hoped that the JBC can balance its longstanding reputation as an organization with integrity, with just enough flexibility to catch up to 21st century culture in the least offensive sense.

“I hope one day, Japan boxing will become more popular to a point where people watch boxing not based on a world title match or not,” envisions Ioka. “To do so, old thinking and structure may have to be reconsidered. I hope more fighters will go fight at—let’s say at Madison Square Garden (in New York City) and that it would change the perception of Japanese boxers in a positive way.

“For me, I have a brand in Japan as a world champion boxer, I hope to elevate this brand and take it internationally and be a role model to young fighters to dream big. So, I’m not really thinking about my tattoo [affecting] this fight, which I believe was great for Japan boxing, I’m thinking more about the future and to make boxing better for young fighters who are trying to make boxing as their living.”

[QUOTE=Boxfan83;21006511]Its a stupid rule just like your response. Kamikaze lover. And I own a 3/4 of a million dollar home, I dont mind spending the rest of my time in my backyard, especially after the lap pool is done.[/QUOTE] I…

'And I own a 3/4 of a million dollar home, I dont mind spending the rest of my time in my backyard, especially after the lap pool is done.' In the UK (& probably also Ireland), we'd say 'Bully for…

Japan is a crazy culture

They should keep the rule. I like that there are places where traditional attitudes and standards are maintained. As opposed to the rest of the more "liberal" world that has turned into a mess.

[QUOTE=fourtheboys96;21005349]Trust me. Ioka's tattoo is quite far from the gang-type tattoos in Japan. He's got a western type lion. [b]Japan lion tattoo looks like a dragon.[/b][/QUOTE] That sounds more like a Foo Dog