Kazuto Ioka looks for a second shot at history, while Aston Palicte takes his second swing at a first title reign.

Japan’s Ioka tipped the scales at a trim and ready 114¾ pounds, while the equally fighting fit Palicte who weighed right at the 115-pound divisional limit for his fourth straight fight away from his native Philippines.

The bout will air live on Fuji TV in Japan and stream live globally on UFC Fight Pass. 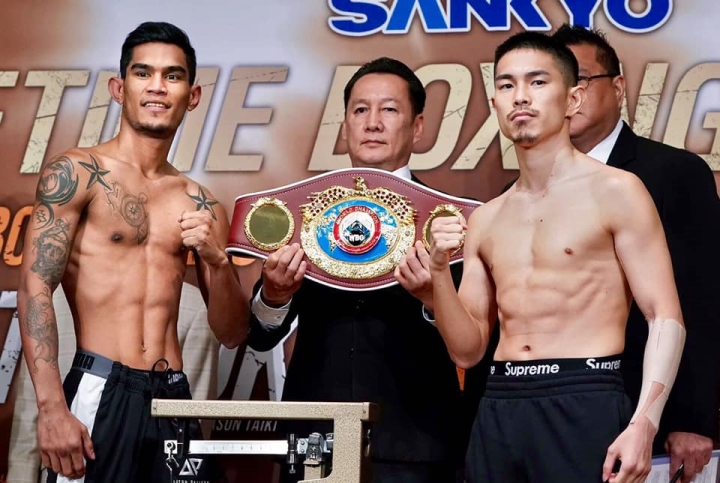 Ioka (23-2, 13KOs) looks to become the first ever male boxer from Japan to claim a major title in four different weight divisions. The 30-year old remains best known for his memorable strawweight title run, which ended on a high—and historic—note, outpointing countryman Akira Yaegashi over 12 thrilling rounds in their June 2012 unification bout.

The event marked the first time ever that two reigning titlists from Japan met in a unification bout.

Subsequent title reigns at junior flyweight and flyweight weren’t quite as notable. In fact, his flyweight run beginning with his first career loss and ended with his vacating the title and abruptly retiring in 2017, in disgust over the direction of his career.

Waiting in the wings was Palicte (25-2-1, 21KOs) who fought to a disputed draw versus Nietes on the same card as Ioka-Arroyo. Rather than a rematch being ordered straightaway, Palicte was first asked to win a title eliminator while watching his countryman become a four-division titlist. The 28-year old slugger did his part, scoring a 2nd round knockout of Jose Martinez this past January.

From there came the order for Nietes to enter talks for a rematch with Palicte; he instead opted to vacate the title and seek out bigger fights in the twilight of his career.

Palicte will fight away from the Philippines for the seventh time in his career, six of which will have come in his last eight starts once the opening bell sounds on Wednesday.

In the evening’s chief support, Japan’s Hiroto Kyoguchi—a stablemate of Ioka—attempts the first defense of his junior flyweight title versus Thailand’s Tanawat Nakoon in a battle of unbeaten and ambitious young fighters.

Kyoguchi checked in at 107¾ pounds, while Nakoon weighed 107½ pounds.

The bout marks the first career title fight for Nakoon (11-0, 5KOs) who steps up in class while also traveling outside of his native Thailand for the first time as a pro.

Kyoguchi (12-0, 9KOs) claimed his portion of the 108-pound crown in a stunning 10th round knockout of Hekkie Budler last New Year’s Eve, on the same show in which Ioka fell just short of becoming a four-division titlist. The win was already Kyoguchi’s fourth in title fights, having previously reigned as a junior flyweight titilist before moving up in weight.

Is Fuji TV the same with TBS? The fight banner indicated TBS but in the article, it mentioned Fuji TV. Anyway I think the fight card starts @ 4:30 pm Japan time, on June 19.

I thought they're fighting in China the more neutral venue, why the change.