Inspired By Pacquiao, Plania Prepared For Career-Changing Upset Of Greer

Inspired by Manny Pacquiao, a 9-year-old Mike Plania entered a boxing gym for the first time in 2006 in Pacquiao’s hometown of General Santos City.

Plania has met Pacquiao several times since then and remains very much motivated by what the Filipino icon has accomplished both in and out of the boxing ring. On Tuesday night, the Philippines’ Plania will introduce himself to boxing fans worldwide when he appears in his first televised main event – a 10-round, 120-pound fight against Chicago’s Joshua Greer Jr.

“For me, even before I started boxing my idol was Manny Pacquiao,” Plania told BoxingScene.com. “That’s why I was encouraged to box. I want to become a world champion, too, like senator Manny Pacquiao. He is my number one idol. For me and all people in the Philippines, Manny Pacquiao, we’re very proud of him.” 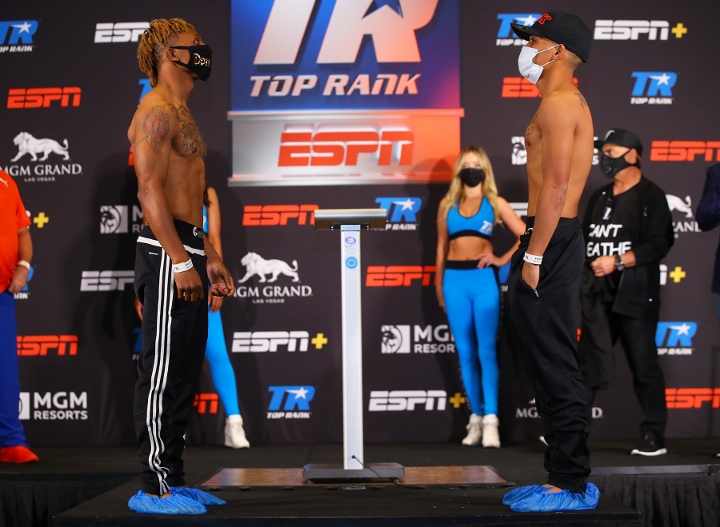 The 23-year-old Plania is an understandable underdog against Greer, who’s a 4-1 favorite to win an encounter ESPN will televise from MGM Grand Conference Center in Las Vegas (8 p.m. ET/5 p.m. PT). The 26-year-old Greer (22-1-1, 12 KOs) has won 19 straight fights, is the WBO’s number one contender for Johnriel Casimero’s bantamweight title and is the IBF’s second-ranked challenger for its 118-pound champ, Naoya Inoue.

Plania is on an eight-fight winning streak of his own. He is the WBA’s 10th-rated contender at the 122-pound limit and is ranked 12th by the IBF.

Plania accepted the Greer fight on a little less than four weeks’ notice, but he has lived and trained in a Miami gym run by his trainer, Osmiri Fernandez, since the pandemic began in mid-March. He has mostly sparred for this fight with fellow Filipino Reymart Gaballo (23-0, 20 KOs), the WBA’s number one contender for the other bantamweight title Inoue owns.

“When the pandemic first hit, they really didn’t understand what was going on,” Sean Gibbons, Plania’s adviser, said. “No one really knew how long it was gonna last. ‘Should we leave? Should we not?’ So, they figured, ‘We’re already here, so we’ll keep training and eventually boxing will come back.’ Mike was training for a fight that was supposed to be at the end of March, and he just kept training. He didn’t know he was gonna fight Josh Greer, but he knew he would fight. That’s why he didn’t go back to the Philippines.”

By remaining in the United States, Plania was able to land this potentially career-transforming fight against Greer, whose April 25 fight against Australia’s Jason Moloney (20-1, 17 KOs) was canceled due to the COVID-19 pandemic.

“I’m so happy for this opportunity,” Plania said. “I’ll show my best in this fight. It’s a big opportunity to show my talent to the world. I know I’m the underdog, but I’m ready for the challenge. Joshua Greer is a good fighter. He’s world-class, too, but I don’t care. I’ll do my best and win this fight.”

[QUOTE=Bautizzle;20614528]Looks like Greer got his ass sat TWICE HAHAHAHAHA[/QUOTE] I fell asleep and missed it man

[QUOTE=Pacdbest2;20614539]When I saw he comes from General Santos City, I knew Greer will have his hands full. Plania lost only to Payano, I knew we have an upset coming. Don’t F$ck with Pinoys from Gensan![/QUOTE] Dirt poor from the Philippines…

When I saw he comes from General Santos City, I knew Greer will have his hands full. Plania lost only to Payano, I knew we have an upset coming. Don’t F$ck with Pinoys from Gensan!

[QUOTE=*TonyMontana*;20613684]Hes gunna get knocked out and blame a shoulder injury[/QUOTE] Looks like Greer got his ass sat TWICE HAHAHAHAHA

Hes gunna get knocked out and blame a shoulder injury