Fareed Samad has known Daniel Jacobs ever since the Brooklyn-bred boxer was 15-years-old, but their relationship kicked into second gear when they rekindled their friendship in January.

The reunion came at a time when Jacobs was about to prepare for the fight of his life against Canelo Alvarez, and begin drifting away from longtime trainer Andre Rozier.

Jacobs (35-3. 29 KOs) will make his super middleweight debut Friday against Julio Cesar Chavez Jr. (51-3-1, 33 KOs) in Phoenix on DAZN after splitting with Rozier due to financial issues in September. 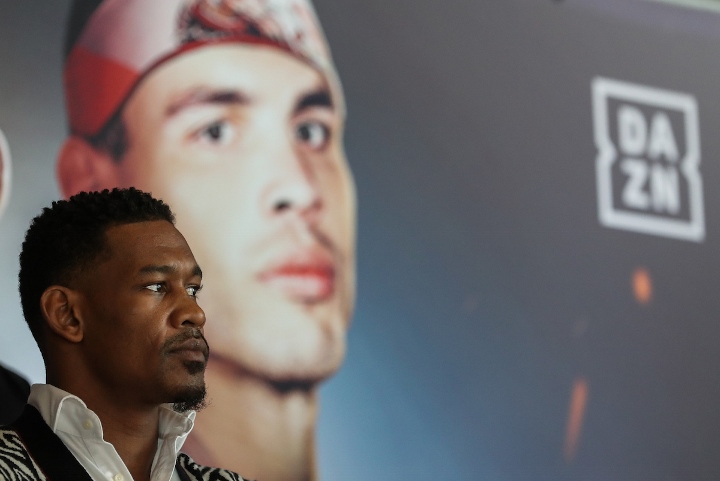 Jacobs summoned Samad for lead training duties after Samad worked as a co-trainer for the Alvarez fight in May, a competitive unanimous decision loss for Jacobs.

Samad is a former alternate for the 1996 United States Olympics Team who transitioned into coaching once his pro career was finished with 10 wins, zero losses and nine knockouts. He’s since trained the likes of Zab Judah for three years and Devin Haney for his first two pro fights and served as an U.S. Army World Class Athlete Program coach as well.

“I was always in the corner when Daniel Jacobs used to smoke our guys, but we never talked about boxing. We always talked about family, his health and how I appreciated him as a good guy,” Samad told BoxingScene.com in an interview. “He saw me this year before the Canelo fight in Las Vegas and said, ‘I’m missing a little something, and I think you can be the right fit for it. I came in, worked him out one day, and he said, ‘I’m in.’”

Samad initially went from holding the mitts a couple of times a week to growing into the routine everyday for the Alvarez fight. The still nimble 51-year-old even ran with Jacobs to hold him accountable and motivated. The Philly native was feeling fresh physically, and for his feats on the chalkboard — he produced the gameplan for WBC super welterweight champion Tony Harrison in Colorado Springs to help setup Harrison’s upset win over Jermell Charlo last year.

“I said, ‘I don’t want to step on anybody’s toes. Danny said, ‘No. If you’re teaching something that’s right, we’re going to do what’s right,” said Samad. “He let me do what I needed to do. He told me he was in charge and gave me free reign.”

Jacobs said he split with Rozier due to “some small differences,” and because it was time to make the switch.

“It came at the best time,” Jacobs told BoxingScene.com. “I am fully in control of my career and things that happen. I’m just happy to have that liberty to move how I want to move. I have the best team, and now that I have this new trainer, I’m looking forward to learning and implementing new things … It’s a new chapter. I’m excited.”

Samad would have Jacobs by himself at most for twice a week during the Canelo camp, and said he had a tandem role working with Rozier.

In hindsight, Samad said Friday’s full transition as the lead trainer is an ideal one because he got to see the full routine the first time.

“We were all in the corner together. Andre would go first, and I would say something to close it out in the end,” said Samad. “He wanted me. He enjoyed what I gave him and worked on it together. It was excellent to see him evolve … Being technical is the key. My ideal level in this camp is that he likes boxing by stimulating his mind with the ‘why’ right after I offer instructions. He likes that because he’s cerebral. That’s what I’m bringing to the table.”

After Jacobs showed a growing interest in Samad’s services, Samad ensured Jacobs and the fighter’s manager, Keith Conolly, that he was the right man for the job.

Now, he’ll get his first opportunity to prove it against the Freddie Roach-trained Chavez Jr. In 2011, Jacobs employed the training of Roach after splitting with Rozier the first time.

“We’re training for Chavez Jr. expecting him to look sharp and have the best fight of his life,” said Samad, who held camp in Atlanta and Las Vegas. “It might be the best Chavez we’ve ever seen. This is like his last hoorah. We’re not taking him lightly.

“I love training. I love teaching. I love focusing on technique. I’m not worried about what anybody else is doing. I’m the best at what I do. I’m second to none at what I do.”

We're never gonna know all the facts about the split. But one thing people forget about is the possibility of Jacobs' Cancer coming back and possibly costing him all he has and then killing him at a young age which…

[QUOTE=anonymous2.0;20268204]The way I heard the split was that Andre was taking less money from Jacobs so that Jacobs could take home more and once Jacobs started being a major name that was worth something Andre asked for a fair share…

We need a list of the hypocrites that screamed for trainer McCracken’s head after AJ’s loss and praised Fury for dumping Davison after his struggle. It’s easy to verify who's who...maybe post a list of hypocrites with an agenda.

Boxing has no shelf life...and God help you if you lose a fight. The income Jacobs makes in his next few fights will last his family for the rest of their lives. Jacobs made the unenviable, shlty choice between friend…