It is officially Monster season in Las Vegas.

Naoya Inoue touched down in Sin City on Sunday evening, two weeks ahead of his upcoming unified bantamweight title defense versus Australia’s Jason Moloney (21-1, 17KOs). Their bout takes place October 31, live on ESPN+ from The Bubble at MGM Grand in Las Vegas.

The occasion marks the official Top Rank debut for Japan’s Inoue (19-0, 16KOs), who announced his signing with the Vegas-based company immediately after his thrilling 12-round win over Nonito Donaire last November in Saitama, Japan. The night marks his most recent fight to date, having unified two titles and also claimed top honors in the World Boxing Super Series bantamweight tournament.

Now comes the time to conquer the United States.

“I’ve prepared perfectly for this title defense against Jason Moloney,” Inoue told BoxingScene.com through a translator via text. “I am excited to fight in Las Vegas for the first time and to give my best performance in the ring.” 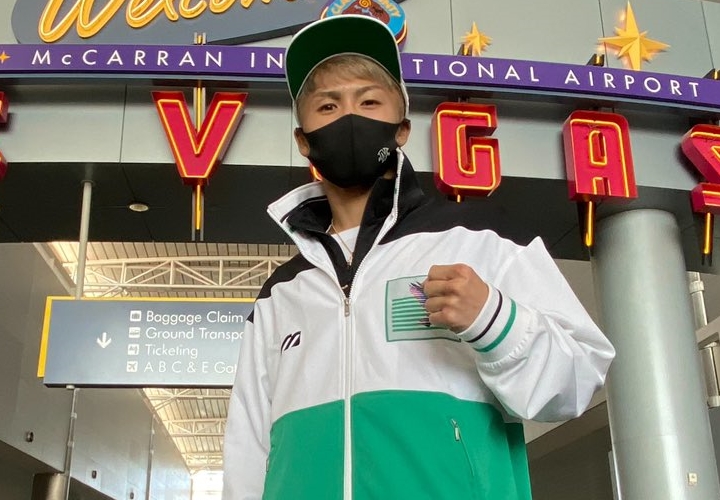 Inoue fights stateside for just the second time in his career. His U.S. debut came in September 2017, scoring a 6th round knockout of Antonio Nieves to defend a junior bantamweight title. Inoue—who also reigned as a junior flyweight titlist—would make his seventh and final title defense later in the year before moving up to bantamweight where he is 4-0 (3KOs).

The return to the states was originally due to take place in a three-belt unification clash with Philippines’ John Riel Casimero, only for the ongoing coronavirus pandemic to ruin plans for their April 25 clash at Mandalay Bay in Las Vegas.

Instead, Inoue now heads into a Halloween thriller with Moloney, who has won four straight since a narrow 12-round loss to then bantamweight titlist Emmanuel Rodriguez in October 2018. The bout came in the quarterfinal round of the WBSS tournament, with Inoue going on to ice Rodriguez inside of two rounds. Slightly more generous scoring would have placed Moloney in the semifinal round, though fate instead brings them together at this time.

“All that’s left are final adjustments for the final two weeks,” notes Inoue. “It’s work as usual and we will be ready for this fight.”

[QUOTE=DFM;20847832]Choco fight was gonna happen. Then Choco met Srisaket Sor Rungvisai, lost to him twice, one of them with knockout. Then Srisaket ducked Inoue. Inoue couldn't find any good opponents at Super Flyweight because everyone was ducking him. So he…

[QUOTE=Rick Taylor;20843977]what are you blathering about kid? LMAO who said they are in their prime now? the article was on boxingscene a few years ago you casual [B]inoue and his team were trying to justify ducking choco "we're not ready…

[QUOTE=Airtioteclint;20844583]Do you like to post maximum controversies because it's the best way you know how to get attention?[/QUOTE] do you like to get salty so much because people dont agree with you? also YDKSAB 😜

[QUOTE=Rick Taylor;20842908]inoue stays fighting bums[/QUOTE] Do you like to post maximum controversies because it's the best way you know how to get attention?