Powerful veteran Nonito Donaire rocked Inoue with a right hand in the ninth round, bloodied the unbeaten Japanese star and made him work harder to win Thursday night than he had done in any of his first 18 professional fights. Inoue landed his fair share of damaging punches on the ever-dangerous Donaire, too, dropped Donaire with a body shot in the 11th round and won a unanimous decision in their 12-round WBSS 118-pound final at Saitama Super Arena in Saitama, Japan.

The 26-year-old Inoue (19-0, 16 KOs), of Yokohama, Japan, retained his IBF bantamweight title. Inoue, who has crept toward the top of pound-for-pound lists, also took the WBA “super” world 118-pound championship from Donaire.

Judges Luigi Boscarelli (116-111) and Octavio Rodriguez (117-109) scored eight and nine rounds, respectively, for Inoue. Judge Robert Hoyle had it much closer, 114-113, which means Donaire lost on his card only due to that 11th-round knockdown.

Donaire didn’t win, but it was a strong showing for the aged four-division champion. He also ended Inoue’s eight-fight knockout streak.

“I think Donaire is a true champion,” Inoue told announcer Ray Flores in the ring. “He’s very strong. I [was] victorious, but I’m not the greatest all time yet. I think I have to go over [the fight] and get stronger. Next year and on, I’ll keep fighting, I’ll [be] victorious and I wanna be the strongest of all time.”

Inoue fought through a long, deep cut just beneath his right eyebrow for 10-plus rounds. The champion admitted he suffered from some double vision once that cut occurred in the second round.

Las Vegas’ Donaire (40-6, 26 KOs), who’ll turn 37 next week, was rejuvenated by a return to the 118-pound division for the WBSS bantamweight tournament. Before testing Inoue, he beat Ryan Burnett and Stephon Young to reach the final, which took place 18 months after Donaire lost a 12-round unanimous decision to former featherweight and super bantamweight champ Carl Frampton.

After flooring Donaire in the 11th round, Inoue tried his best to finish him in the 12th round. He landed several overhand rights in those three minutes, but the courageous Donaire withstood all those shots and made it to the final bell.

Inoue and Donaire embraced for several seconds as soon as their fight ended.

A left hook to the body by Inoue hurt Donaire and made him, turn away, move around the ring and take a knee with 1:49 to go in the 11th round. A damaged Donaire waited until referee Ernie Sharif’s count reached nine before he got up.

Somehow, Donaire fended off a swarming Inoue and made it to the end of the round. A hard left hook up top by Donaire stopped Inoue in his tracks with 1:06 to go in the 11th round.

Inoue landed several power shots in the final 30 seconds of the 10th round, including a right hand with 13 seconds to go in it. A stiff jab by Donaire snapped back Inoue’s head barely a minute into the 10th round.

Donaire blasted Inoue with a right hand that wobbled him with 1:53 to go in the ninth round. A stunned Inoue tried to hold Donaire right after that shot landed, but he withstood Donaire’s punches well for the remainder of that round.

Donaire’s hard right hand landed 45 seconds into the eighth round. Inoue caught Donaire with a straight right hand just before the halfway point of the eighth.

Toward the end of the eighth, Inoue bled from the cut over his right eye and his nose.

Donaire fell to the canvas 40 seconds into the seventh round, after an awkward entanglement with Inoue sent him to his gloves and knees. Inoue worked well off his jab in the final minute of the seventh round. 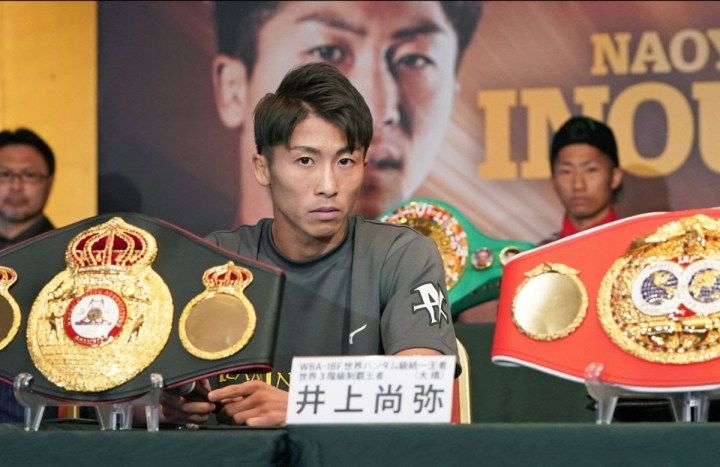 Inoue’s right hand landed to the side of Donaire’s head in the sixth round. He added another right hand several seconds later, with just over a minute remaining in the sixth.

Two left hooks by Inoue landed in the first minute of the fifth round. Donaire’s right hand caught Inoue with just under 50 seconds to go in the fifth.

Donaire drilled Inoue with a short, left hook with just under a minute to go in the second round. A left hook by Inoue knocked Donaire off balance barely a minute into the second round, when Inoue sustained a cut over his right eye.

Inoue’s counter left hook caught Donaire, whose left hook didn’t land flush about 1:20 into the opening round. Inoue later landed an overhand right that backed up Donaire in the first round.