Inoue Blows Out McDonnell in 1st Round to Win Bantamweight Title

Japan’s Inoue showed McDonnell immediately why he is nicknamed “Monster.” He knocked down the defending bantamweight champion twice in less than two minutes and won their bantamweight title bout by first-round knockout at Ota City General Gymnasium.

Inoue opened up to McDonnell’s body about 40 seconds into their fight. His attack moved McDonnell into the ropes and made him cover up. 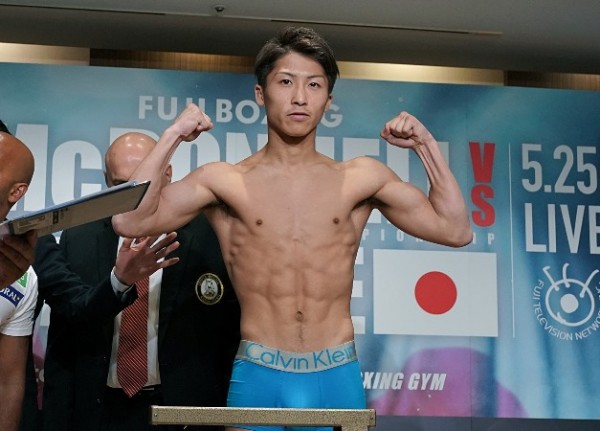 McDonnell made it to his feet, but Inoue jumped on him quickly. He hurt McDonnell again with a straight right hand, followed it up with a left hook and McDonnell went down again.

Referee Luis Pabon stopped their scheduled 12-round, 118-pound title bout just 1:52 into it as McDonnell hit the canvas for the second time. Inoue won the WBA world bantamweight title from McDonnell.

Inoue went into their championship match as a heavy favorite in his homeland and quickly displayed why. Multiple Internet sports books listed Inoue as an 8-1 favorite over the defending champion from Doncaster, England.

He moved up to the 118-pound division to challenge McDonnell (29-3-1, 13 KOs, 1 NC), rather than taking title unification fights within the 115-pound division.

The 5-feet-9 McDonnell owned a 4½-inch height advantage and an experience edge, but that didn’t deter Inoue. McDonnell tried to use his jab and keep his distance, yet couldn’t prevent Inoue from getting inside against him.

Before Friday night, the 32-year-old McDonnell hadn’t lost since dropping back-to-back decisions to Chris Edwards (then 10-12-3) in December 2007 and Lee Haskins in March 2008 (then 16-2). He had defended the WBA world 118-pound championship seven times before Inoue took it from him.

Inoue’s impressive win was streamed live in the United States by ESPN+ as the main event of a doubleheader. In the opener, Japan’s Ken Shiro (13-0, 7 KOs) scored a second-round knockout against Mexico’s Ganigan Lopez (34-8, 19 KOs) in their rematch to defend his WBC light flyweight title.

mcDonalds was hurt but it was a early hometown stoppage, rematch pleasee

I snuck backstage and into inoues room after the fight.

I've always believed this guy is one of the special talents in boxing, his skills are clear as day. I put him up there with Crawford, Loma, and Spence.

[QUOTE=1hourRun;18805082]Yeah I mean this is a new weight, or did you think I thought Jamie was any good?[/QUOTE] Its just like GGG stalking Geale or Murry, Maklin or Barker thats the level this guy was. Every one was talking sh*t…