Boxer Iaso Velichkov has informed topsport.bg and other Bulgarian media that his now dead cousin, Boris, has been using his license for a year and fought eight times posing as Iaso Velichkov.

According to the same source, the two cousins are not lookalikes, which means that it is very lazy work by the various commissions that have allowed this scandal to go on - and now a young man is dead, who probably shouldn´t have been fighting at all.

Isus Velichkov, the fighter who was believed to have died Saturday night in Shkoder, initially revealed on his Facebook that it was his cousin Boris Velichkov who was in the ring and died of reasons unknown.

Velichkov is said to have moved from Bulgaria to Albania and had fought as an amateur boxer there. Boris used his cousin´s license.

Anyone who has been in boxing for some time knows that checking the photo on the license is not enough - it should be checked and compared with how it looks compares on a ID card / passport / driver´s license and this should be part of any commission's procedure before they allow a fighter in the ring.

Still, it doesn´t answer to what was wrong with Boris Velichkov and why this wasn´t detected in the pre-fight checkup. Professional boxing in Albania is relatively new and while many Albanian fighters are active they are mainly based abroad and seldom fight at home so the local commission is probably untested and working with a small budget.

As BoxingScene.com reported earlier today, featherweight Ardit Murja (4-1 going into the fight) was the fighter in the other end of the ring.

The fight started with the two feeling each other but soon it´s evident that Boris Velichkov's legs were beginning to desert him. Murja then scored with a decent left jab and Boris Velichkov Stanchov at first doesn't seem to react but then stumbles backwards and goes down in his corner and is fully out cold.

Medical staff rushed in, but he could not be revived and passed away. 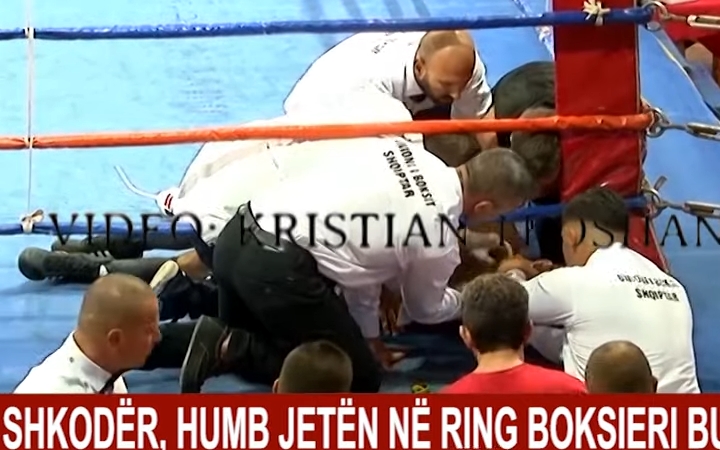 [QUOTE=.!WAR RUIZ!.;20078581]it didnt go over my head, you act liek this fool gonna be like "OH MY COUSIN DIED BECAUSE OF ME, ONLY IF I DIDNT LET HIM USE MY LICENSEE THAT HE ASKED ME FOR, WHYYYY" lmfao you dudes…

[QUOTE=MeanestNiceGuy;20078502]It went over your head, my apologies.[/QUOTE] it didnt go over my head, you act liek this fool gonna be like "OH MY COUSIN DIED BECAUSE OF ME, ONLY IF I DIDNT LET HIM USE MY LICENSEE THAT HE ASKED…

[QUOTE=.!WAR RUIZ!.;20078452]Sound tough? wtf are you talking about? lmfao you fools are hella insecure. I post one point of view of it and you spidey senses start firing lmfao grow some balls. Why the **** will he feel guilty? homeboy…

[QUOTE=MeanestNiceGuy;20078185]That has nothing to do with it. Point is, he allowed him to use his license and he lost his life...that's not just gonna leave his mind over the weekend, buddy. Stop trying to sound so tough.[/QUOTE] Sound tough? wtf…