Hurd: For Me To Be in FOTY With Lara, I Must Be Exciting Fighter

Given the fighting style of Jarrett Hurd, it was widely expected that the unbeaten and unified super welterweight would eventually land in a Fight of the Year entrant.

The only surprise is the one which eventually earned him such honors.

Hurd’s 12-round split decision win over Erislandy Lara in their unification bout last April was a virtual pick-‘em going in and for good reason. The unbeaten boxer from the greater Washington D.C. area needed a late knockdown just to emerge victorious on two of the three scorecards, in a fight where many figured Lara’s only chance to win on points. 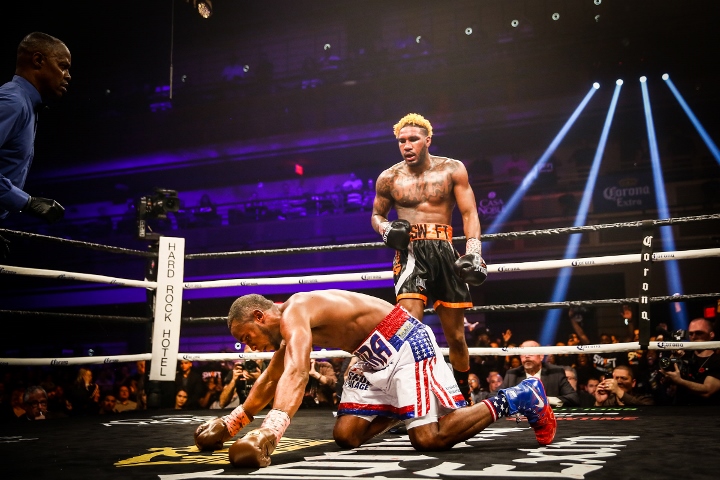 Few figured going into the night that the bout would result in one that would be well-represented during Year-End awards season. Even the winner didn’t expect as much.

“Listen, it's crazy,” Hurd (23-0, 16KOs) note during a recent media conference call to discuss his May 11 title defense versus Julian Williams, live on Fox from Fairfax, Va. “I was just talking about it the other day. For me to be in a Fight of the Year against a fighter that everyone looks at kind of says it's boring... for me to get into a fight against someone like him, I said I must be an exciting fighter.

“That's what everyone says. When they tune in the fight is actually packed. Because of my vulnerability maybe, and because they like to see fighters get hit.”

The way the fight played out that April night is what boxing fans have come to expect anytime Hurd steps into the ring. His first nationally televised appearance came in Nov. ’15, dismantling previously unbeaten Frank Galarza inside of six rounds live on Showtime.

Six more bouts have followed, including thrilling stoppage wins over Tony Harrison—who has since captured a title—and former champ Austin Trout. In both fights, Hurd was forced to play catch-up after falling behind early.

The manner in which he’s able to swing momentum in his favor makes for great action, even if not entirely by design.

“I want to make it one sided all the way through,” Hurd insists. “I don't want the fight to be close. I don't want it to be a war. I want it to be all me when I get in there. It's definitely not a game plan to go into fights and make them action packed and toe-to-toe like that.

“I want the fight to be all one sided. But I have a different game plan for each fight and it just so happens that the guys I've fought in the past I've needed to use pressure and toe-to-toe action.”

As much figures to be the case versus Williams (26-1-1, 16KOs), a no-nonsense contender from Philadelphia who comes in riding a four-fight win streak. The lone loss of his career came in his first title fight, holding his own versus then-unbeaten 154-pound titlist Jermall Charlo before being stopped in five rounds.

The resourceful Williams has managed to win in a variety of ways in four fights since then. He comes in with a high ring IQ and the type of style for which training can prove difficult.

In other words, it’s perfect for an athlete like Hurd who loves nothing more than to adjust on the fly in between bells.

“We'll see when I get in there,” Hurd says of which version will show up for his homecoming title defense. “You'll never know what style I'll bring out.”

Regardless of how May 11 plays out, Hurt will still have last year’s big win to look forward to—his Fight of the Year-selected war with Lara will be honored during the Boxing Writers Association of America (BWAA) awards dinner later that month in New York City.

“I'm super happy,” acknowledges Hurd, a first-time BWAA award winner in any category. “That's a great accomplishment for me to receive such an award. I go out there and leave it all in the ring and give it my all every time.”

[QUOTE=Jab jab boom;19711133]Lara had a similar action fight with angulo. If you have the balls to bring the fight to Lara without fear of counters, he'll make for an exciting fight. If you try to out box, wait on him…

Some fighters I admire their skill; Lara, Usyk and even Rigondeaux pre-Loma, also Russell. But fighters like Hurd are just plain compelling to watch, a force of nature. This fight, if it gets past the half-way point has classic written…

Hurd is fun to watch I agree with him on that. He doesn't have the best defense in the world which also helps make his fights intriguing to watch.

[QUOTE=Jab jab boom;19711133]Lara had a similar action fight with angulo. If you have the balls to bring the fight to Lara without fear of counters, he'll make for an exciting fight. If you try to out box, wait on him…

Expecting another great fight. Hurd wins his fights Rocky style. He carries you fast, weathers the storm and then becomes an avalanche you can’t escape from. Will be another remarkable outing!!! However can’t sleep on J Rock as his boxing…