Hurd: I Don't Want 'Fights Of The Year;' I Want One-Sided Fights

Jarrett Hurd has been involved in at least “Fight of the Year” candidates in each of the past two years.

His split-decision defeat of Erislandy Lara in April 2018 won that award last year from the Boxing Writers Association of America. He also engaged in a top candidate for the award last May 11, when Julian Williams dropped Hurd and upset him to take the IBF, IBO and WBA 154-pound titles from him in Fairfax, Virginia.

As gratifying as that recognition might’ve been, Hurd hopes he’s not involved in another of those types of fights for the rest of his career. Hurd focused on his defense and footwork during his recently completed training camp in Colorado Springs, Colorado, and intends to win his upcoming bouts based on skill, not the sheer size that has helped the 6-feet-1 former champion overpower opponents in recent years. 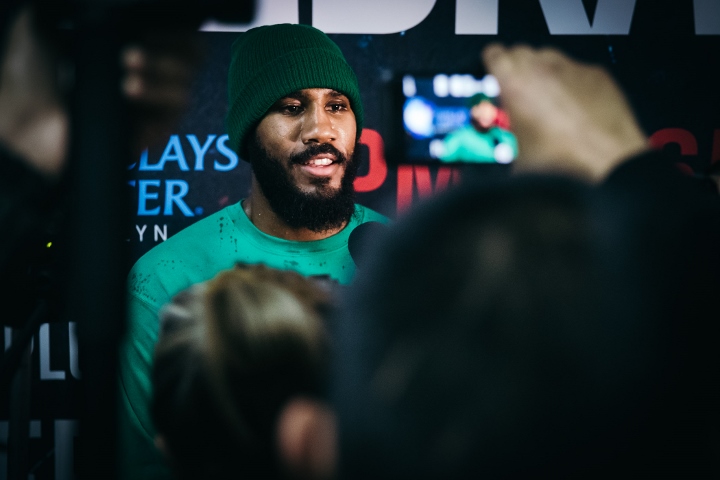 “The second half of my career, I don’t wanna focus on my size and using my size advantage,” Hurd said. “That was my thing in my previous wins against other opponents at 154. I know I’m gonna move up to 160 soon, so we’re now focusing on using my skills to my advantage. We’re focused on trying to get the wins behind a nice skill set.

“I just wanna be a more disciplined fighter, disciplined with my footwork. Instead of just walking in, walking in behind my jab and just being disciplined on my defense – just the things that got me to where I am today, and not just my relying on my conditioning and going hard to get me the wins.”

[QUOTE=KillaMane26;20345718]Yea hopefully that boi start moving his damn head! Cuz once he start fighting guys as big as him or with a big punch.. Win or lose he gonna take hella damage... He won't be singing at pressers no more…

[QUOTE=siablo14;20345709]It's all good. I felt how you felt when JRock was pressing him but then I noticed that he took VADA for the first one and his trainer left him so I said maybe nothing shady is going on here.…

[QUOTE=KillaMane26;20345695]I aint literally mean 5 tests... I meant J-Rock was on his neck about different testing.. My bad. But maybe you right, i just thought it was suspicious at the time[/QUOTE] It's all good. I felt how you felt when…

[QUOTE=siablo14;20345668]I never said JRock didn't want testing. I said that wasn't the reason why Hurd pulled out. Hurd pulled out because his trainer left him and he had to find a new trainer. From the link you posted: Hurd did…

[QUOTE=KillaMane26;20344702][url]https://www.boxingscene.com/julian-williams-firm-with-vada-demand-hurd-rematch--141855[/url] [url]https://www.boxingaction24.com/j-rock-williams-warns-jarrett-hurd-no-drug-testing-no-rematch/[/url] How did yall forget how JRock wanted Vada testing.... We made threads about it[/QUOTE] I never said JRock didn't want testing. I said that wasn't the reason why Hurd pulled out. Hurd pulled out because his trainer left…