Hurd: I Wanna Be Undisputed 154-Pound Champ Before Moving Up

NEW YORK – Jarrett Hurd’s goal is the same as before he lost three 154-pound titles.

The former IBF/IBO/WBA champion wants to become the undisputed ruler of that division before he moves up to middleweight. He didn’t mention Jermell Charlo, Jeison Rosario or Patrick Teixeira by name during a post-fight press conference early Sunday morning at Barclays Center, but those currently are the three title-holders he’d have to beat to transform that ambition into reality.

“Listen, I want the belts and I want the best,” Hurd said after defeating Francisco Santana by unanimous decision in a 10-rounder Showtime televised Saturday night. “I was this close to becoming undisputed champion and it’s right around the corner for me. That’s what I want – I wanna become undisputed, so whoever got the belts, that’s who I wanna fight.” 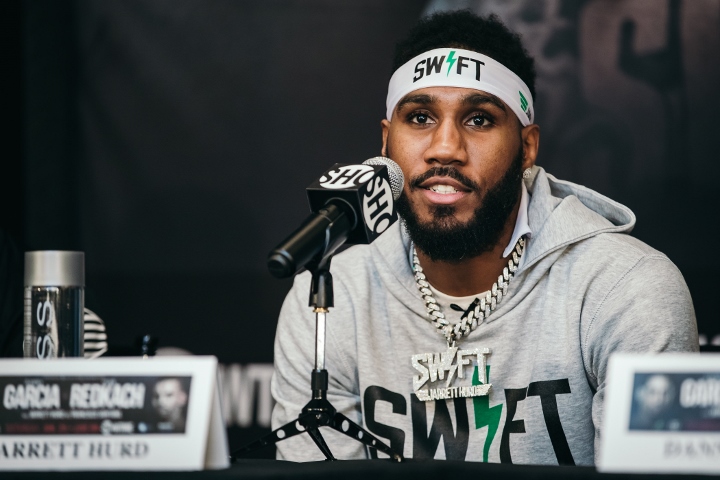 Houston’s Charlo (33-1, 17 KOs), who owns the WBC super welterweight title, appears to be the only one of the aforementioned champions who would be available to face Hurd next.

The Dominican Republic’s Rosario (20-1-1, 14 KOs) owes Julian Williams a rematch after upsetting Williams by fifth-round technical knockout to win the IBF, IBO and WBA titles January 18 in Philadelphia, Williams’ hometown. Williams (27-2-1, 16 KOs, 1 NC), who won those titles by upsetting Hurd by unanimous decision May 11, says he wants the Rosario rematch to happen immediately.

Hurd discussed the possibility of challenging Charlo next during an interview with BoxingScene.com before he beat Santana.

The 29-year-old Hurd (24-1, 16 KOs) emphasized after dropping and out-pointing the smaller, slower Santana (25-8-1, 12 KOs) that he doesn’t intend to move up to the middleweight division any time soon.

“How much longer?,” Hurd said when asked how long he can make 154 pounds. “I don’t know an exact time, but I will be fighting more often than two times a year. I’m gonna try to at least, at the minimum, fight three times a year. And I’m gonna stick around [at 154 pounds] as long as I can, man. I’m gonna stick around until I’m missing weight. I’m gonna do whatever I can to, you know, accomplish that goal, where I wanna become undisputed before I move up [to the middleweight division].”

If Castano beats Tex(and I think he will) PBC will own all the major titles at 154 allowing for undisputed!....

So, everyone above me seems a tad skeptical Of Mr. Hurd. I personally think he means it, I just do not think he is long for 154. There is bigger money and more prestige at 160. I believe he is…

Lies lies. So his new trainer refused to train him on short notice? Against a fighter who he was originally favored over and now who got upset himself? Ok even if that were true the first fight you had to…

They all say that but they almost never do it. I just watched his last fight and I didn't think he looked very good against his cherry pick. I think Jermell would beat him. I doubt he is good enough…

Good to hear. Go take on Charlo while JRock and Rosario sort their sh**t out.