Hurd: I Have Enough At 154 To Keep Me Occupied For A While

With all of the money is there is to be made in the lucrative middleweight division, it’s easy for any fighter just one weight class below to give into temptation.

Most onlookers would assume it’s an even easier move for Jarrett Hurd, already a huge super welterweight who seems big—and young enough—to soon outgrow the division.

For now, though, not even the allure of a sack full of cash will prevent him from remaining focus on present business at hand.

“I have enough going on at 154 to keep me occupied for a while,” Hurd acknowledged to BoxingScene.com, speaking both specifically to his May 11 unified title defense versus Julian ‘J-Rock’ Williams and other challenges in general. “The plan was always to become the undisputed (154-pound) champion and then, if we need challenges, move up in weight.” 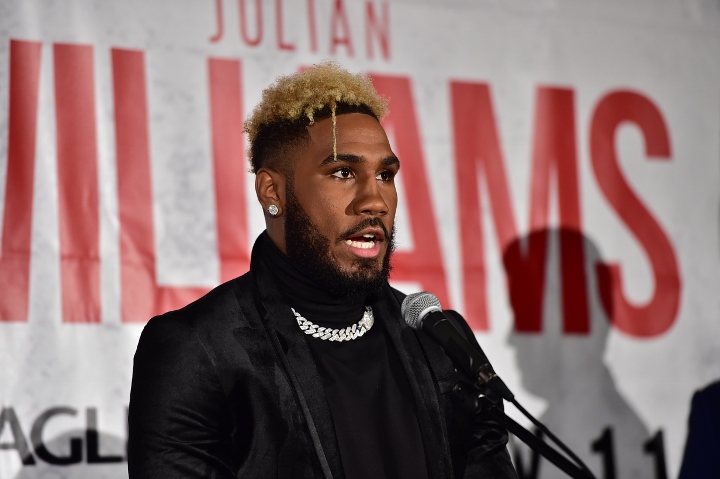 Hurd’s upcoming PBC on Fox headlining clahs with Williams (26-1-1, 16KOs) will mark the fourth defense of at least one super welterweight title in his possession since a 9th round knockout of Tony Harrison in their Feb. ’17 vacant title fight.

Harrison has since emerged as a 154-pound titlist, scoring an upset win over Jermell Charlo last December to ruin plans for a Hurd-Charlo three-belt unification bout.

The fight instead prompted Hurd (23-0, 17KOs)—who picked up a second belt in his Fight of the Year-level 12-round win over Erislandy Lara last April—to look to Philadelphia’s Williams for his next challenge, which will serve as a homecoming.

The bout takes place at EagleBank Arena in Fairfax, Virginia, a short drive from Hurd’s hometown in Accokeek, Maryland. With the exposure of appearing live on Fox combined with his crowd-pleasing style and charismatic personality, it’s quite possible that Hurd—especially with a win in May—becomes the bank at super welterweight.

It’s just as well, since he doesn’t feel a physical need to abandon the division anytime soon.

“It was always in my head that one day I’d wind up at middleweight,” admits Hurd. “But then you look at my last two fights, I came in at 152 so I’m making weight no problem. For now, the plan is to get through J-Rock Williams.

“After that, if Jermell Charlo beats Tony Harrison in the rematch, we’ll go back to looking at that unification fight. If Harrison wins again, then we will look at fighting him again since he has the belt we want. We don’t need to go to middleweight now, not until we run out of challenges at 154 and there’s plenty to do here, May 11th included.”

[QUOTE=Rigpig;19629204]I agree Spence is probably better skill wise but the size difference I think would be to much. A lot of guys go up one weight class and they’re not nearly as good. I just can’t see Spence stopping the…

[QUOTE=P4P Forever;19625215]I'm not big on J Rock either Hurd should win easy, probably a TKO around Rd8. I think Hurds defense is leaky, he makes for it with heart and volume punching. He's heavy handed but not a big puncher…

[QUOTE=Boxing lives;19626144]It is hard to hunt down J Rock and force the firefight but that is definitely in Hurd's skill set. I see him having huge advantages late but I wouldn't go so far as to call J Rock a…

[QUOTE=TheUptownKid;19625983]I think Charlo let j rock box which wasn’t in his best interest. When it became a fire fight it went Charlos way. Hurd also let Harrison box which went Harrison’s way, but when it turns to a fire fight,…