The welterweight division may be crowded with talent, but Errol Spence Jr. is the one holding all of the cards to success.

After wrecking mandatory challenger Carlos Ocompo on Saturday night with a wicked body shot in the first round, Spence said all of the right things that will both endear him to fight fans and put the rest of the welterweight division on notice.

What the 28-year-old said afterward is exactly what boxing fans want to hear and the right way to promote yourself when you have no promoter.

Not only is Spence with the right network (Showtime) to fight everyone not named Terence Crawford, but he’s making sure that his desire to fight the best now instead of later is put into the atmosphere.

First and foremost, while most fighters who have competed under the PBC umbrella have been lucky to get two fights in a calendar year, Spence has made it clear that he’s looking for a third fight before the year closes. It’s improbable that he’ll get a chance to unify the titles so rather than face another overmatched mandatory in Yourdenis Ugas, Spence is looking to bypass another one-sided bout and challenge himself by facing former champion Jessie Vargas.

"No disrespect to Ugas. He's a great fighter and he's ranked in the IBF, so I'm gonna have to fight him (eventually). But, you know, I'm looking to build my legacy and me beating Ugas is not gonna get me anywhere." 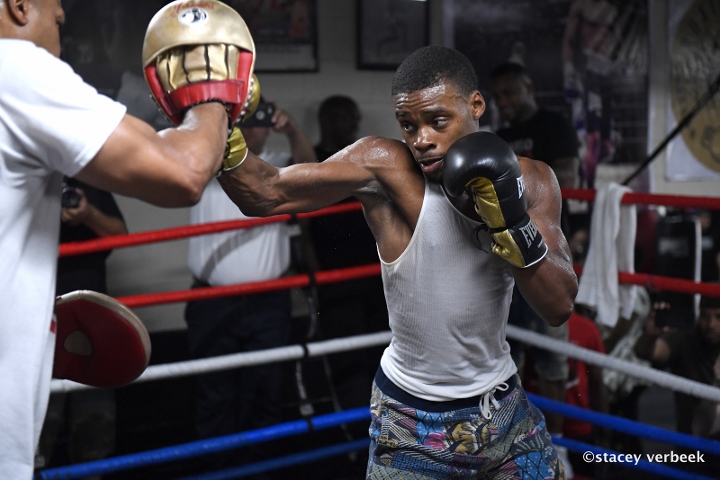 He’s absolutely right - Ugas isn’t going to get him anywhere. However, even though there are rumors that Vargas is currently negotiating a rematch with Adrien Broner, Spence is doing the right thing by throwing his name out there as a possible opponent. Nobody knows exactly where Broner’s head is at these days and a rematch with Vargas could fall apart at any given moment. Spence is aware that he needs bigger names on his resume to legitimize his status as one of the best pound for pound fighters on the planet. Vargas would be the perfect litmus test if Spence is unable to land a fight with Thurman, Porter or Garcia.

Speaking of Thurman, Spence also took time to throw a thinly veiled jab at Thurman while also throwing down the gauntlet to face him next if he’s up to it.

“If he want it,” Spence said to FightHype about facing Thurman next. “I mean, that’s on Keith. Keith gotta come back, man. He’ll probably have like two fights [before me] or get injured again. Training camp’s rough for the kid, man. Rough for the kid.”

Thurman has done himself no favors by stating that a fight with Spence would happen only on his terms while dealing with injuries that have kept him sidelined for the entirety of 2018. He’s been coy about facing Porter, Garcia and Spence, but his coyness hasn’t quite played out in the manner that he would like to think it would. Unlike Floyd Mayweather, who teased facing Manny Pacquiao for years before it finally happened, Thurman doesn’t have that kind of cache with boxing fans. Spence, on the other hand, saw an opening and took it to make sure that the public knew that he was ready and everything rested on Thurman’s shoulders.

And then there’s Danny Garcia and Shawn Porter. Spence has been the odd man out of the Thurman-Garcia-Porter bickering triangle but made sure to inject himself into the conversation when the trio have oddly been silent about facing Spence. Although it appears that Garcia-Porter for the vacant WBC title appears to be heading to New York in August, Spence suggested that he’d be ready and willing to face the winner of that fight next, if Thurman didn’t materialize. Realistically, that fight wouldn’t happen until early 2019, at the earliest. But if the cards fall the way Spence has laid them out, it could mean that the Texan would be facing Vargas this fall, the winner of Garcia-Porter next Spring and Thurman later in 2019. That’s one hell of a way to go through the division.

And then there’s Crawford.

Obviously, Crawford being with Top Rank makes a Spence-Crawford fight more difficult to make than the other fights, but Spence made it clear that Bud is on his radar.

What Spence hasn’t done is say things like “I’ll let my manager figure it out.” Fight fans never want to hear that. Even if it doesn’t come to fruition immediately, the perception will be that it’s not Spence’s fault.

And public perception is everything. The ball is now in everyone else’s court.

[QUOTE=lion33lit;18899745]Hahahahaha, good one! I don't think I could find a shirt like that if I wanted to! Lol..I'm not a die hard hard Kell Brook fan by any means, but he did impress me when he came over here and…

[QUOTE=lion33lit;18898621]If u say so brother, youre entitled to your own opinion! but just look up your info further regarding Angulo, not some speculation post before the final result. Angulo had no fracture. U may want him to for your point…

[QUOTE=Bronx2245;18898012]You can continue to make excuses for Brook all day, but in the end, Spence Jr. broke Brook down with body shots and constant pressure, and snatched his will! Breaking his face was just the icing on the cake! June…

[QUOTE=lion33lit;18897969]When a two weight division above you classic slugger "champion" goes to angry work on your face, followed by another known slugger in your weight division - it can "crush a skull" so to speak! Because that broken "skull" is…