If there is anyone who knows about boxing at an advanced age it is Bernard Hopkins, the former middleweight and light heavyweight world champion, who fought at a high level into his 50s.

While “The Alien” had success, he also knows how difficult it is was to fight effectively in his late 40s and early 50s, and he has a message for a trio of fellow International Boxing Hall of Famers well past an age when most fighters can still fight well: It’s a bad idea.

Former heavyweight champions Mike Tyson and Evander Holyfield have in recent weeks discussed the prospect of returning to the ring and have regularly posted photos and video clips to social media of their training sessions.

Not long after Tyson and Holyfield brought up the topic, it was former six-division world champion Oscar De La Hoya – Hopkins’ friend and business partner in Golden Boy Promotions – who followed suit and spoke even more aggressively about a potential comeback.

“They might not consider doing it if they hear what I have to say to them,” Hopkins told BoxingScene.com.

Tyson is 54 and has not had a boxing match in 15 years, since Kevin McBride made him quit after six rounds in 2005 to send Tyson into retirement with his third knockout loss in his final four bouts.

Holyfield is 57 and has not boxed in nine years, since he stopped Brian Nielsen in the 10th round after years of obvious decline that was at one point considered so severe that he had his license suspended by New York after such a poor performance there in 2004.

De La Hoya is 47 and has not boxed in 12 years, since Manny Pacquiao tore him apart in an overwhelmingly one-sided eighth-round knockout loss that ended with De La Hoya retiring on his stool.

Hopkins was blunt about whether they should attempt comebacks. “No,” he said.

But Hopkins did offer a caveat if they ultimately decide to fight again, be it in an exhibition or a real fight – if they could even obtain boxing licenses at their age and inactivity level. 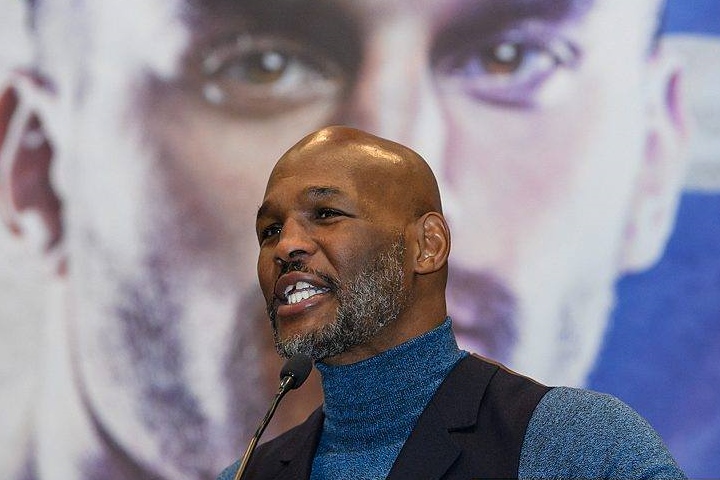 While Hopkins has not yet spoken to De La Hoya about his specific plans, he said he would offer him the following the advice:

“Pick the right opponent and remember your legacy is still alive as long as you’re in the ring so you got to protect that legacy,” Hopkins said. “I would say stay away from anybody not in your age bracket or a year or two under and any top guy out there. I don’t see anybody that’s retired, including myself, being competitive enough to win. I don’t want anybody, whether it’s my partner or anybody I really care about or support to get hurt. I would say, ‘Why would you (come back)? Can I talk you out of it for a minute?”

Then Hopkins – tongue in cheek – offered his view on who he would like to see De La Hoya fight in an exhibition if he decided to get back into the ring.

“Who would I like to see him fight that’s going to be entertaining? Dana White,” Hopkins said of the UFC president. “If you’re going to come back – and I’ll put my promoter hat on – Dana White if you want that thing I call entertainment. He’s punched the bag in the gym and there seems to be a dislike there (between White and De La Hoya) for whatever reason, right? You can’t tell me that that wouldn’t be a blockbuster event.”

Hopkins set several age-related records during his stellar 28-year career, including breaking heavyweight legend George Foreman’s mark as the oldest fighter to win a world title when, at 46 years, 4 months, 6 days, Hopkins outpointed Jean Pascal to win the light heavyweight title in 2011. In 2013, Hopkins broke his own record by winning another light heavyweight belt from Tavoris Cloud at 48 years, 1 month, 22 days. In 2014, at 49, Hopkins became the oldest fighter to unify titles when he outpointed Beibut Shumenov.

But Hopkins, now 55, retired in December 2016 – one month shy of his 52nd birthday – when he lost what was promoted as his farewell fight. He got knocked out of the ring by Joe Smith Jr. in the eighth round.

On the subject of Tyson and Holyfield, Hopkins said many of his friends have brought their potential comebacks up to him.

“People I have talked to were surprised I said that (they should not come back) because of my age when I ended my career,” Hopkins said. “They forgot the most important thing when they say I went to 51, almost 52 -- I never stopped. I never took a three-year break much less 10 years off. The most important thing about any sport is you must be active and in boxing proactive. Bernard Hopkins was both of those things at the top level at 30, 40 even 50. I never had a three, four, five years where I sat back, wasn’t in the gym and was drinking glasses of wine.

“I have friends who say to me, ‘Hey, man, Tyson looked good on the video!’ Well, that’s the video!  I can take you to any gym, forget styles, find a guy to hit the mitts for a one-rounder and someone out there who don’t know or thinks they know will think the guy is pretty good. I’m 55 and if you saw me hitting the mitts I would look like I’m getting ready for a Tito Trinidad rematch in 2021. If I hit the mitts you’d say I could fight tomorrow. That because they’re mitts! Don’t get fooled (about) Mike Tyson and Holyfield.”

And if they do come back?

“At most fights they got one ambulance,” Hopkins said. “I think we should have two if they do because both of them could be out of breath and need oxygen. But they’re not going to get licensed. You got to pass a whole bunch of tests. Who would license them? It would be a tragedy and devastating to boxing if they fought (and got hurt). It would have to be exhibition.”

De La Hoya has said he has been training for awhile and went so far as to say in a recent interview with KCBS-TV in his hometown of Los Angeles that he plans to begin sparring in the next couple of weeks.

Hopkins acknowledged that De La Hoya’s comeback talk – which he has done before – seems more serious this time around.

“This looks a little more serious because I’ve seen training behind it and he looks damn good, but going out and fighting and competing at a level that he feels he can win, first of all who’s he going to fight? What weight is the fight going to be at? And is the public going to accept it,” Hopkins said.

“Oscar still has the name. Tyson got the name, of course. Holyfield got the name. Do people want to see fights or do people want to see entertainment? That’s what I looked at when I talked to people over the last week or two when this flared up. If they want to get entertained it’ll be Oscar, Tyson, Holyfield and the floodgates are gonna open and it will be a whole bunch of people (coming back).”

Hopkins said he won’t be one of them.