Bernard Hopkins never needs a reason to talk at length, but was certainly the most qualified person in the room to put into proper perspective Saul ‘Canelo’ Alvarez’s decision to jump from middleweight to light heavyweight for his next outing.

Alvarez still reigns as the World middleweight champion but it’s his status as one of the sport’s pound-for-pound best he wishes to improve upon as he moves up two divisions to face reigning three-time light heavyweight titlist Sergey Kovalev. Their bout takes place Nov. 2 at the MGM Grand in Las Vegas, Nev., and where a win by Alvarez will put him in exclusive company.

Only three fighters in history have claimed titles at 154, 160 and 175 pounds—Thomas Hearns, Mike McCallum and ‘Sugar’ Ray Leonard—while only the late, great Dick Tiger remains the only boxer in history to win a light heavyweight title while having actively served as the reigning middleweight champion. 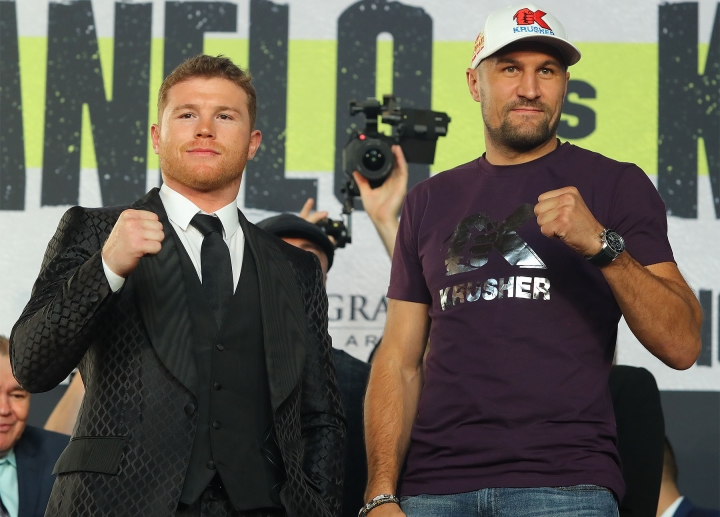 Few in history have made the leap to the light heavyweight crown straight from middleweight, an even rarer occurrence upon the firm establishment of the super middleweight division in 1984.

“I know a little bit about history,” Hopkins—a significant stakeholder in Golden Boy Promotions, Alvarez’s promoter—noted to the crowd and assembled media on hand for the official announcement press conference Wednesday evening at Union Station in Los Angeles, Calif. “For Canelo to take a big leap from ’60 to ’75 to dare to be great to make history… anyone who’s not a real educated in the history of boxing, wouldn’t know what I’m talking about right now.

“Just in case you want to learn, it’s very historic to be in the position of Canelo. To want to bite off challenges and challenge himself, and dare to be great and make history.”

Hopkins (55-8-2, 32KOs) made the leap in 2006, nearly a full year after ending his 10-year middleweight title reign with the first of two consecutive losses to Jermain Taylor. Not only did the legendary future Hall of Famer move up, but did so against the best light heavyweight in the world at the time in Antonio Tarver, scoring a landslide decision. For those who debate the validity of Tarver’s “championship” status (The Ring title was at stake, though historians recognized Zsolt Erdei as the lineal champion), Hopkins would right that ship following a 12-round nod over Jean Pascal in their May 2011 rematch to claim true championship status. Just one defense followed—an aborted two-round No-Contest versus Chad Dawson, whom would dethrone Hopkins in their April 2012 rematch—before claiming another version of the title in 2013.

Two defenses would come of his second reign, including a dominant win over Beibut Shumenov in their April 2014 unification bout, before running into Kovalev himself as he dropped a 12-round decision in Nov. 2014.

“There’s very few fighters in boxing that have accomplished ’60-’75 and been successful,” noted Hopkins. “As you know, you’re sitting here staring and hearing one right now. I know the personal feeling about making history with because I’ve been there done that. But now it’s Canelo’s time.”

The scheduled 12-round bout will stream live on DAZN.

Hopkins's speech before his last fight was pretty hilarious considering the outcome. "I'll spank this white boy and take him to school.. and then MAYBE if he recovers mentally.. MENTALLY.. then maybe he can come back to boxing"

[QUOTE=steeve steel;20070377]There is some truth to what you're saying, but it goes deeper than that; Bernard lived his whole life with a huuuuuge chip on his shoulder! He never gave any credit to his opponent when they beat him. If…

[QUOTE=Verus;20068471]Bernard was promoting a "persona," promoting fights and waging psychological warfare against his opponents most of the time. I would take his pronouncements at that time with a grain of salt. I don't think that he hated Puerto Ricans when…

So tired of seeing and hearing this guy. Good fighter. But, he never drew a dime. Brags about himself endlessly. Why do they bring him to press conferences? Nobody cares about him. Just fade into obscurity. Please just go away…

ADD COMMENT VIEW COMMENTS (18)
Advertisement
Top Headlines Memo Heredia Has High Hopes For Robeisy Ramirez Bob Arum: We Think Ajagba Can Be Among Top Heavyweights In The World Ennis: Extra Weight Won’t Matter For Abreu; I'll Go In There & Get The Stoppage Pedraza: As I Keep Moving Forward, Fights Will Keep Getting Tougher And Tougher Alex Saucedo vs. Arnold Barboza Jr. To Co-Headline Lomachenko-Lopez On 10/17 Erickson Lubin: You Could See How Much I've Changed Since The Charlo Fight Jaron Ennis: I Might Have To Get Into A Mandatory Position To Get A Title Shot Ajagba: Time Away From Ring Was Frustrating, Hurts To Not Be Able To Do Something You Love Nyambayar: I Had A Sprained Ankle Against Gary Russell; I'd Love A Rematch Lubin: I'm Fresher, Hungrier Than Lara & Trout; Looking To Make Statement Against Gausha Pedraza: I Think Lomachenko Will Dominate Lopez, But He Can't Get Reckless Daily Bread Mailbag: Charlo Brothers, Ennis, Canelo, Spinks, More BoxingScene.com's Television Pick of The Week - September 19 McKenna: Beating Ohara Davies Will Be Highlight of My Career Joe Joyce: We'll See if Dubois Can Take My Heavy, Powerful Shots! Frank Warren: Whyte Received Shorter Medical Suspension Than Spelman? Francis Chua Aims To Fight, Looks To Kambosos, NG, MacKenzie Boxing Facing Financial Adjustments Johnny Nelson Confident Whyte Would Have Benefited With Tibbs in Corner Vijender Singh Hopes To Resume Career Before Year is Over Josh Taylor Must Remain Focused on Khongsong, Says Ben Davison Javier Molina: Pedraza Looked Good With LesPierre - I'm No LesPierre! Amir Khan Appointed as President of WBC Middle East Boxing Council Ajagba vs. Rice, Ramirez vs. Caraballo - Ready To Fight Jose Pedraza, Javier Molina - Set For Showdown in Las Vegas Pedraza-Molina ESPN+ Weigh-In Report From The Bubble Ennis vs. Abreu, Nyambayar vs. Breedy - Set For Bouts Erickson Lubin, Terrell Gausha - Ready For WBC Eliminator Haven Brady Jr. Inks Promotional With Top Rank Crawford vs. Brook Negotiations at Advanced Stage For November 14 Zhang Zhilei Inks Promotional Pact With Eddie Hearn Juan Carlos Abreu Comes In 3-Plus Pounds Overweight For Jaron Ennis Fight Rene Tellez-Giron Return Pushed Back Due To COVID-19 Terrell Gausha: I Was Nervous That I Wouldn't Get This Fight Again Teofimo Lopez: Lomachenko Is On His Way Out, I'm Looking Through Him Jermell Charlo: I Don't Want Judges To Make Decision For Me Against Rosario Hearn on Yarde-Buatsi: It's a Massive Box Office Fight at The O2 Abreu: Either Jaron Ennis Knocks Me Out Or I Will Knock Him Out Bilal Fawaz Inks Agreement With MTK Global Lewis Ritson Vows To Fight His Way To a WBA Title Shot
Advertisement
Latest Boxing Videos 'The Journey - Charlo Doubleheader' 30 Minute Special Showtime Releases Trailer For Documentary 'Ringside' Charles Martin Reacts To Helenius Stopping Kownacki Robert Helenius Reacts To Shocking TKO of Kownacki Adam Kownacki Reacts To TKO Defeat To Helenius Joseph Parker Reflects on Fury-Wilder, Talks Return Mikey Garcia Reflects on Fury-Wilder, Talks Vargas Eddie Hearn Reflects on Fury Stopping Wilder, More Kenny Porter Reacts To Tyson Fury Stopping Wilder Jose Ramirez Reacts To Tyson Fury Stopping Wilder
Recent Top Stories Graveyard Shifts At Warehouse Motivated Molina To Turn Around Boxing Career Erickson Lubin vs. Terrell Gausha: The Play-In Derevyanchenko Vows: I'm Ready For Everything in Charlo Fight Remembering "The Showdown" – Still a Thrill After 39 Years
Advertisement
Latest Forum Threads
Advertisement
Advertisement
This website may contain adult language.
TM & © 2020 BoxingScene. All Rights Reserved.