Hopes Rise For Return of Crowds as Lockdown Eased in UK

The prospects of crowds returning to boxing in the UK moved a stage closer on Tuesday as Boris Johnson, the prime minister announced easing the lockdown, although the changes are not likely to mean any audiences will be present for Eddie Hearn and Frank Warren’s series of summer fights.

No shows have taken place in the UK since March, with the first show back due to be on July 10, when Brad Foster defends his British and Commonwealth super-bantamweight titles against Jimmy Beech at the BT Sport studios in the Olympic Park in East London, on the first of five planned behind-closed-doors shows presented by Warren’s Queensberry Promotions. 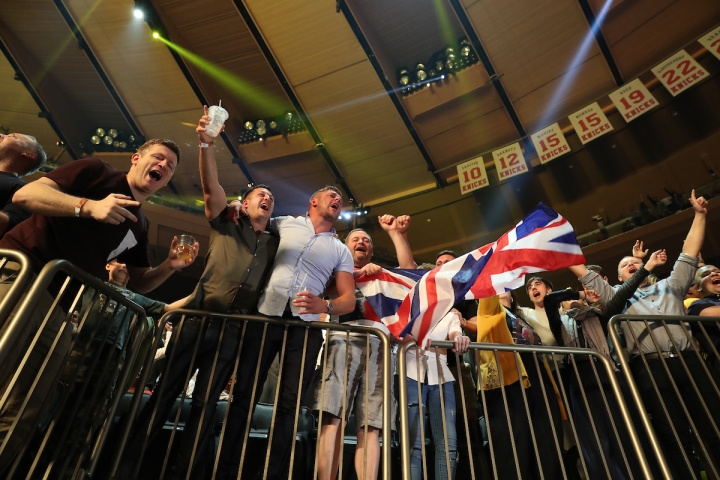 Meanwhile, Hearn’s Matchroom are due to begin a four-week Fight Camp series from the back garden of their Brentwood, Essex, headquarters on July 25, with a fight between Sam Eggington and Ted Cheeseman now expected to headline the first card.

Both shows will take place under the British Boxing Board of Control’s guidelines for retuning to action after the coronavirus pandemic. Plans are already in place for both shows to

Hearn has stated his belief that crowds could be allowed back in restricted numbers by September and remains hopeful that Anthony Joshua’s WBA, WBO and IBF heavyweight title defence against Kubrat Pulev will take place in the UK.

Matchroom hope to have their first shows with crowds on October 3 and 17, when they have respectively rescheduled fights between Lee Selby and George Kambosos in Cardiff, and Lewis Ritson and Miguel Vazquez in Newcastle .

While a crowd of 60,000, which would have been present had the fight gone ahead as planned at the Tottenham Hotspur Stadium last weekend, will not be allowed any time soon, Hearn wants to stage the fight in front of a socially-distanced VIPs-only audience of about 1,000, with the historic Royal Albert Hall the preferred venue.

Meanwhile, the Joe Joyce-Daniel Dubois British, Commonwealth and European heavyweight title clash – which was originally booked for April and then pushed back to July – will not take place until crowds are allowed back.

MTK Global could also be returning in August with their Golden Contract series.

The light-heavyweight semi-finals – featuring Hosea Burton, Serge Michel, Liam Conroy and Ricards Bolotniks – had been due to take pace on March 20, but was postponed three days before because of the rising threat of the pandemic.

Sport has slowly been restarting in the UK, with Premier League football beginning last week behind-closed-doors, while horse racing returned at the start of the month, with the Royal Ascot five-day festival, which usually attracts up to 70,000 attendees per day, proceeding with no racegoers last week. A cricket Test series between England and the West Indies is due to start on July 8, also with no fans.

Never knew that commercial Gym's still close in UK at this point. Where I live, they had open the commercial Gym's a week ago with a bunch of restriction, wishing one have equipment exercises in their house. No good times…