Hooker's Trainer: Prograis Fight Will Be One-Sided After A Couple Rounds

FRISCO, Texas – Maurice Hooker and his trainer expect an easier fight than most anticipate April 17.

The former WBO junior welterweight champion and Brian McIntyre predicted Thursday that they’ll have to endure a few rough rounds early when they encounter Regis Prograis that night. Thereafter, though, they think they’ll pick apart the shorter, strong southpaw in a 12-round, 143-pound fight DAZN will stream from MGM National Harbor in Oxon Hill, Maryland.

“I know what Maurice can do and I know what [Prograis] can do,” McIntyre said during a press conference at the Omni Frisco Hotel. “I know Maurice can do better than what he can do. It’s gonna be a tough fight. He’s Creole. He’s from Louisiana. He’s tough. His bloodline is tough. He’s a tough kid. He’s only tough for so long, though. It’s gonna be one-sided after a couple rounds.” 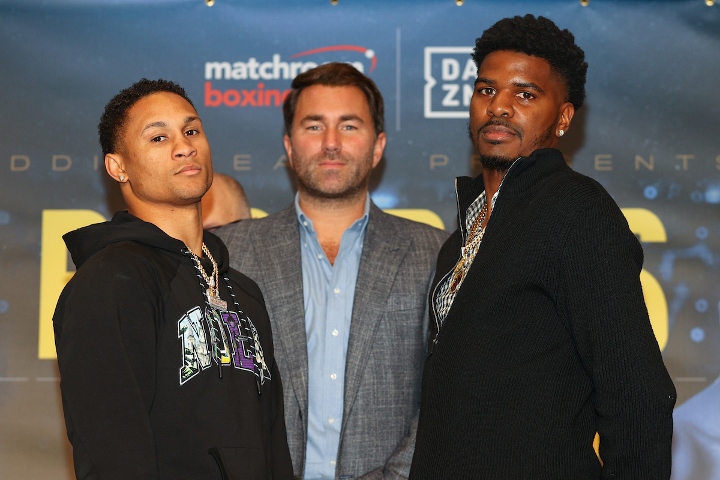 McIntyre and Hooker each stopped short of predicting a knockout, a result Prograis projected during an interview with BoxingScene.com moments before the press conference began.

Dallas’ Hooker (27-1-3, 18 KOs) bounced back from his first professional loss – a sixth-round, technical-knockout versus Jose Ramirez – by stopping Uriel Perez (19-5, 17 KOs) in the first round December 20 at Talking Stick Resort Arena in Phoenix. Hooker lost the WBO 140-pound championship to Ramirez (25-0, 17 KOs), also the WBC champ, in what began as a competitive title unification fight July 27 at College Park Center in Arlington, Texas.

New Orleans’ Prograis (24-1, 20 KOs) will fight for the first time since suffering his first defeat – a closely contested 12-rounder against Josh Taylor (16-0, 12 KOs). Scotland’s Taylor edged Prograis by majority decision and walked away from their World Boxing Super Series 140-pound championship match with his IBF belt and Prograis’ WBA crown October 26 at O2 Arena in London.

“I’m gonna go in there and do my thing, listen to the game plan of my coach, take it round by round,” Hooker said. “I will come out on top. If the knockout there, I’m gonna go for it. If it’s not, I’m gonna cruise to the victory.”

Big height difference. Might make for tough going for Prograis.

Hooker has to fight disciplined but he can win if he keeps his hands moving.

I think this Hooker’s getting fked! I like both fighters, I hope Prograis has fully recovered from JT. Hooker’s range might be tricky at this catchweight

yes most definitely. He would also think Josh Taylor beat him each second of each round