Hooker: I Was Shocked; Thought They Would Rob Me in England

The Dallas native knew he had out-boxed Terry Flanagan in their 12-round, 140-pound title bout and deserved the victory.

Hooker just didn’t think he would win a decision in Flanagan’s hometown of Manchester, England. 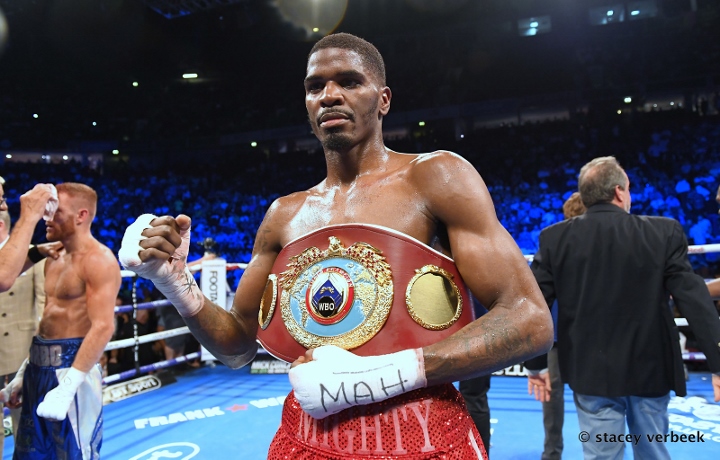 Two judges proved him wrong, however, as Hooker defeated the favored Flanagan by split decision and returned to the United States a world champion. England’s Phil Edwards (117-111) and South Africa’s Deon Dwarte (115-113) scored their competitive championship match for Hooker, who lost on the scorecard of Illinois’ Jerry Jakubco (117-111).

The 28-year-old Hooker (24-0-3, 16 KOs) was more than pleasantly surprised when the scores were read following just his second fight outside the United States and his debut in the United Kingdom.

“When I got the decision, I couldn’t believe it,” said Hooker, who would only give Flanagan a rematch in the United States. “I was in shock, that they gave me a fair chance and that the judges called the right call. I couldn’t believe it. It was like a dream come true.”

The 29-year-old Flanagan (33-1, 13 KOs), a former WBO lightweight champ, was a heavy favorite over Hooker entering Flanagan’s move up to the 140-pound limit. The previously unbeaten southpaw had difficulty dealing with Hooker’s height and reach, though, and couldn’t hurt his opponent in the main event at Manchester Arena.

“The game plan was to go in there and do me, make him adjust to me and fight my fight, not his fight,” Hooker said. “I blocked the crowd out and did what I had to do to come out with the win.”

Hooker knows that he can fight as well as Flanagan did and win in US! I have to disagree about ‘not hurting Hooker’. There was a stage where Flanagan had him hurt but it was the end of the round…

Really dude? Here’s guy who has AT LEAST three gift decisions and now he’s worried HE might get robbed? Come on guy.

I tipped Turbo to beat Hooker but I hate to say it he was really pisspoor on the night except for the final round. Terry didn't even deserve a draw with that showing. And Hooker is no more than a…