Hooker: Flanagan Overlooked Me; I Shocked the Boxing World!

Flanagan called Hooker “just another American I’m going to add to the list” and made it sound as if Dallas’ Hooker was in over his head against the then-undefeated former WBO lightweight champion.

There also was talk of Flanagan entering the World Boxing Super Series’ 140-pound tournament later this year, as if beating Hooker were a forgone conclusion. 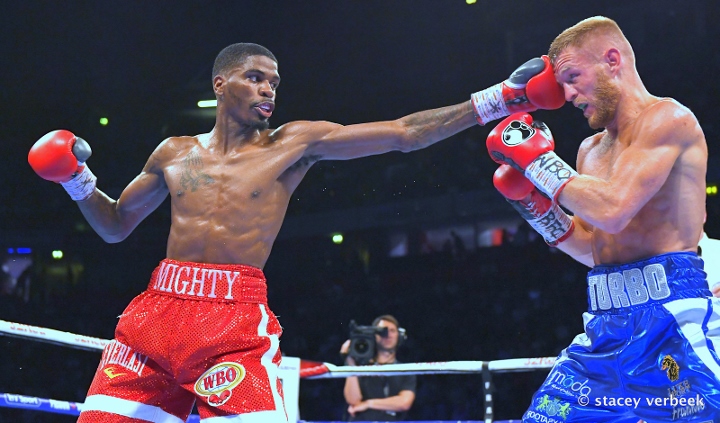 Flanagan’s dismissive comments and talk of Flanagan’s future fights inspired Hooker to pull off an upset in their 12-rounder Saturday night in Manchester, England, Flanagan’s hometown.

“I think he overlooked me,” Hooker told BoxingScene.com. “He was already planning bigger fights for after me, and that motivated me.”

Now it’s the 28-year-old Hooker who is considering entering the WBSS tournament. The newly crowned champion said he’ll make that determination soon, but he is weighing all of his options for his first defense of the WBO 140-pound championship.

“I proved everybody wrong,” Hooker said. “Even people from the USA doubted me in this fight. I was a big underdog. And I shocked the world of boxing. I love being the underdog. It’s OK. I always make it to the top.”

Hooker sensed he had earned Flanagan’s respect based on their exchange in the ring once the decision was announced.

“He said I’m a good fighter, that the fight was very tough for him, and that I was awkward and long,” Hooker said. “We both respected each other after the fight. It was a tough fight.”

flanagan shouldn't be overlooking anyone

I'd only seen him vs Perez before and I guess I was too harsh on him based on an off-night. I don't think he'll ever be #1 at 140 but he's a solid fighter